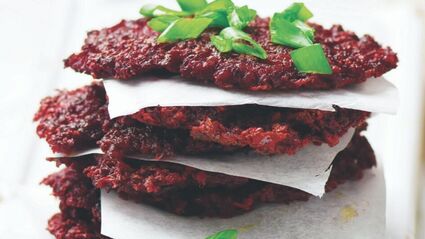 These beet pancakes are also great for using up a variety of other root vegetables. Using a food processor will make quick work of the shredding aspect of the preparation. With a nice browned crust, the latkes are delicious served with applesauce or sour cream and chives, and offer a good alternative to hash browns at breakfast or brunch.

1 cup peeled and shredded carrots (about 6 ounces, 2 to 3 medium carrots)

1/4 cup rye or whole wheat flour, or more as needed to hold the raw latkes together

2 Tbsp neutral oil, such as canola, plus more as needed, for frying

Sour cream and chopped chives, or applesauce for garnish (optional)

Prepare a plate with layers of paper towels to drain the pancakes.

Place the scallions, thyme, salt, beets, carrots, celery root, and potatoes in a large bowl and mix well. Use a paper towel to gently squeeze out any excess moisture. Scatter the flour on top of the shredded vegetables and mix until well incorporated.

Combine the cheese and egg in a small bowl. Fold into the vegetable mixture until well coated.

Heat the oil in a heavy-​bottomed skillet over medium heat until shimmering. Working in batches so as not to crowd the pancakes, use a ¼-​cup measure to scoop the vegetable mixture into the skillet. Flatten the mixture gently, using the back of the measuring cup or a spatula, making sure the pancakes do not touch each other. Fry for 4 to 5 minutes on one side, until browned and crisp, and then flip to fry the other side for the same amount of time, or until browned and crisp. Transfer the latkes to the lined plate to drain. Repeat until the entire vegetable mixture has been used. If more oil is needed for frying subsequent batches, add as necessary.

Serve the beet latkes warm with sour cream and chives or with applesauce as a garnish.

This recipe is reprinted with permission from The Berkshires Farm Table Cookbook, by Elisa Spungen Bildner and Rob Bildner, Countryman Press.