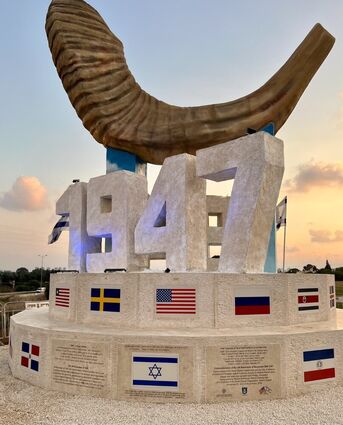 Conceived, funded, and facilitated by the Jewish American Society for Historic Preservation, in cooperation with the World Zionist Organization and the City of Netanya, a major interpretive memorial to the U.N. 1947 Partition Resolution was dedicated.  It is the visible Kesher between Galut and Israel then, today and for tomorrow.

(Boynton Beach, Florida/Netanya, Israel, JNS Wire) - Though there are numerous streets in Israel named November 29, there has never been in Israel or the world a historical memorial for the most famous event in the birthing of the modern state of Israel.

On Nov. 29, 1947, the United Nations voted, by a 71 percent majority, to partition the strife-riven British Mandate for Palestine into two entities, one Jewish and one Arab.