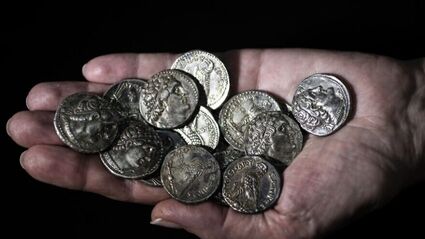 A 2,200-year-old cache of silver coins found in the Judean Desert.

(JNS) - Israeli archaeologists have discovered a small hoard of silver coins in the Judean Desert dating to the reign of Antioch IV, the ruler of the Seleucid Empire at the time of the rebellion of the Maccabees.

The coins, 15 in all, were in a wooden container hidden some 2,200 years ago and uncovered during excavations at the Darageh Stream Nature Reserve overlooking the Dead Sea last May.

The unique, lathe-turned wooden jar was discovered in a crack in the cave. When the lid was removed, packed earth and small stones were found in the upper part of the box. Below this layer, a large piec...