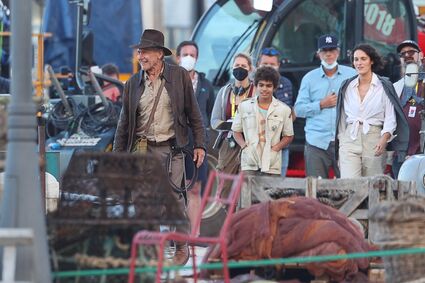 Robino Salvatore/GC Images via Getty Images Harrison Ford and Phoebe Waller-Bridge are seen on the set of "Indiana Jones 5" in Sicily on Oct. 18, 2021 in Castellammare del Golfo, Italy.

(JTA) – Indy's going to sock it to the Third Reich once more.

The fifth movie in the Indiana Jones series will plop Harrison Ford's heroic archaeologist into "a castle swarming with Nazis" in the year 1944, according to new plot details revealed in Empire Magazine this week. Digital de-aging technology will be used to make Ford appear young again for the opening sequence before the film transitions to the year 1969.

Leaked set photos had previously hinted that Nazis would be involved in the story to some degree, but the full details were not known. The image of Indy fighting Nazis with hi...