'Married to the Mob,' but under a chuppah: A new memoir details a Jewish family's crime ties 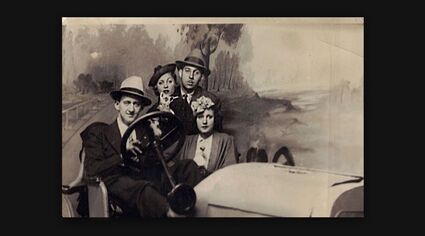 Author Alan Geik's parents, Lou and Reba Geik, foreground, pose for a photo at a penny arcade with the mobster Benny Kassop and his mistress Sylvia Lorber, perhaps in the 1940s.

The father ran a mob-protected trucking company in Manhattan's Garment District. One brother, an NYPD detective, chauffeured organized crime couriers around the city with illicit cash. A kid sister visited a Las Vegas casino where the tween was set up with a couple of slot machines in a private room.

And a close family friend was sent up the river for killing a notorious Jewish gangster.

Meet the family whose close ties to Jewish gangsters are chronicled in "Uncle Charlie Killed Dutch Schultz," a...