The top 8 Jewish sports moments of 2022, from Sue Bird to Sandy Koufax 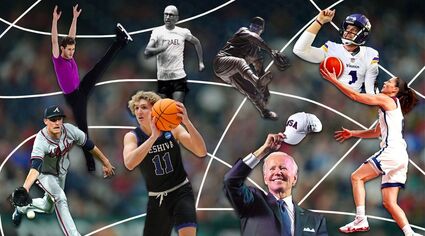 (JTA) — For Jewish sports fans, 2022 was a year of very high highs and particularly low lows.

The fall was dominated by an antisemitism scandal involving Brooklyn Nets star Kyrie Irving, who shared a link to an antisemitic film on Twitter and initially refused to apologize. Irving was suspended for eight games and brought increased attention to antisemitism, Black-Jewish relations and the Black Hebrew Israelite movement.

Off-court controversy aside, Jewish athletes enjoyed an All-Star caliber year in 2022. Jews across sports shined on the international stage at the Maccabiah Games, the Beijing Olympics and the World Cup. And as the sports world honored some of the best to ever do it — we’re looking at you, Sandy Koufax and Sue Bird — we also got a glimpse of the next generation of Jewish sports stars.

We also bid farewell to some familiar faces who retired, such as Jewish Super Bowl champions Ali Marpet and Mitchell Schwartz and the duo behind the Jewish Sports Review magazine. And we shared memories of those who died this year, including Jewish Olympic gold medalist “Ike” Berger, and Vin Scully and Franco Harris — two sports legends who are not Jewish but whose careers are cherished by Jewish fans.

But in the end, here are the Jewish Sport Report’s top Jewish sports moments of the year — plus one to look forward to in 2023.

8. Jason Brown performed to “Schindler’s List” at the 2022 Beijing Olympics

The 2022 Winter Olympics in Beijing kicked off the year in Jewish sports with flair. More than a dozen Jewish athletes from around the world competed in hockey, skating, snowboarding and more.

Perhaps the best known Jewish Olympian was Jason Brown, a figure skater who won a bronze medal at the 2014 Games in Sochi. Brown didn’t medal in 2022 (he finished sixth), but he did nab a personal best score, while skating to the theme from “Schindler’s List.”

With four full seasons in Major League Baseball now under his belt, Atlanta Braves ace Max Fried has solidified himself as one of the sport’s best pitchers.

In 2022, Fried earned his first All-Star selection while winning his third straight Gold Glove award as the National League’s best defensive pitcher. He finished as the runner-up for NL Cy Young Award, given to the league’s best pitcher, and was named to the Second All-MLB team for the second straight year, by posting a 14-7 record in 2022 (identical to his 2021 output) with an MLB-seventh-best 2.48 earned-run average and 170 strikeouts.

The 28-year-old left-hander is a Los Angeles native, and his childhood hero was Dodger legend and fellow lefty Sandy Koufax, who had his own highlight this year — more below.

The Minnesota Vikings owe much of their success this season to the right foot of Greg Joseph.

The Jewish kicker — who has engaged with Jewish communities in every city he has played in — has five game-winning field goals this season, including two in a row that each made history.

In Week 15, Joseph put a 40-yarder through the uprights to secure a 39-36 Vikings win over the Indianapolis Colts, capping off the largest comeback in NFL history. The Colts had led 33-0.

Then in Week 16, Joseph blasted a 61-yarder just as time expired to beat the New York Giants, 27-24. The kick was the longest of Joseph’s career, the longest in Vikings franchise history and likely the longest ever by a Jewish player.

5. Sue Bird brought her remarkable career to an end

From her earliest college days to her final professional game in the WNBA, Sue Bird has been among the best of the best in any sport: She is a two-time NCAA champion, a four-time WNBA champion, a five-time Olympic gold medalist and a four-time FIBA World Champion. She is the all-time WNBA leader in assists, games played, minutes played, All-Star appearances and seasons played.

Bird announced in June that she would retire after the season, and her Seattle Storm lost in the playoff semifinals to the Las Vegas Aces, ending her 19-year career in the WNBA.

Bird, who obtained Israeli citizenship in 2006 in part so she could play for European teams, became a respected entrepreneur, activist and basketball executive even before her playing career ended, setting her up for a successful next chapter.

4. The 50th anniversary of the Munich massacre

This year was the 50th anniversary of the Munich Olympics massacre, the terrorist attack at the 1972 Games that took the lives of 11 Israelis after an hours-long hostage standoff.

After a tense negotiation process, the Israeli families of the victims reached a compensation deal with Germany in time for the official 50th anniversary ceremony. Meanwhile, the Israeli marathon team won gold at the European Championships in Munich, and ESPN produced a documentary about Shaul Ladany, an Olympic racewalker who survived both the Holocaust and the Munich attack. The episode, reported and narrated by Jewish Emmy winner Jeremy Schaap, told the story of the massacre to a mainstream audience on the network’s “E:60” series.

Sandy Koufax’s legacy as the greatest Jewish athlete ever has never been in question. But this past summer, almost 60 years after the Hall of Fame pitcher sat out a World Series game to observe Yom Kippur, Koufax, now 86, was given one of his most meaningful tributes yet: a permanent statue at Dodger Stadium.

The Dodgers unveiled the Koufax statue — next to one of his former teammates, Jackie Robinson — with a pregame ceremony June 18, three years after the statue was originally announced. The unveiling had been postponed due to the pandemic.

Koufax’s Jewish identity — and his famous Yom Kippur sit-out — were highlighted at the ceremony alongside his many career accolades, which include three Cy Young Awards and three seasons each with more than 300 strikeouts and an earned run average below two.

2. Ryan Turell began his professional basketball career, with a kippah

Turell was selected by the Motor City Cruise in October’s G League draft, joining the minor-league affiliate of the Detroit Pistons. He became the first known Orthodox player in the league.

For Jewish fans in Detroit, Turell’s ascension has provided a boost of excitement and enthusiasm. And for the NBA organization, it created an opportunity to engage with the local Jewish community. The Pistons are offering kosher concessions at the Cruise arena and celebrated Jewish Heritage Night and Hanukkah this month.

In the Cruise’s regular season opener Dec. 27, Turell dropped 21 points in only 17 minutes.

1. The Maccabiah Games returned to Israel — with a special guest

Originally scheduled for 2021, the quadrennial international Jewish sports competition kicked off at Teddy Stadium in Jerusalem with an opening ceremony on July 14 — and U.S. President Joe Biden made an appearance, becoming the first American president to do so.

With 10,000 Jewish athletes from around the world convening for two weeks, there were plenty of stories to follow. Here are a few highlights:

Ahead of the 21st Maccabiah Games, explore photos from ‘Jewish Olympics’ history

At the ‘Jewish Olympics,’ Argentine athletes made a splash playing for their country — and for many others

And here’s something to look forward to in 2023

Lastly, as the calendar turns to a new year, there is (at least) one major Jewish sports storyline on deck: the 2023 World Baseball Classic, which will take place in Miami in March.

After its Cinderella run in 2017 and an Olympic appearance in 2021, Team Israel returns to the international stage with more major league talent than ever, including All-Star outfielder Joc Pederson and pitchers Dean Kremer and Eli Morgan.