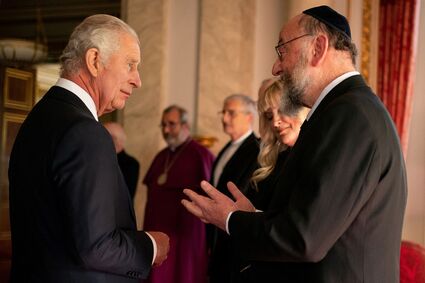 (JTA) - Rabbi Ephraim Mirvis, chief rabbi of the United Hebrew Congregations of the British Commonwealth - commonly referred to as the United Kingdom's chief rabbi - can now add a "Sir" to his title.

Mirvis will be named a "knight commander of the order of the British Empire," according to King Charles' New Year Honours list. Since 1890, the U.K. has announced new knighthoods and other chivalric honors only twice a year, on New Year's Day and on the birthday of the ruling monarch, which in the past was April 21 for Queen Elizabeth II but going forward will be Nov. 14 for King Charles III....