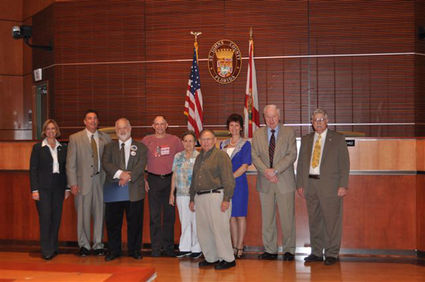 St. Johns County Commissioner Cyndi Stevenson was charged with reading the motion of the Board proclaiming “St. Johns County Jewish History Month,” but she could not finish without stopping to express heartfelt gratitude for the role played by Jews in 1831. That was when St. Augustine’s Moses Elias Levy led the movement to establish free public education in the nation’s oldest city, a model to be followed throughout the United States.

In the midst of nearly a dozen paragraphs, each beginning with a “whereas,” Stevenson read: “Whereas, beginning in January 1831, Moses Elias Levy, a Sephardic Jew born in Morocco served as a founding vice-president of the Florida Educational Society to promote the educational welfare and establish a general system of instruction including at the society’s most significant St. Augustine Branch, bringing, by December 1831, 569 St. Johns County residents under the age of 15 into a system of free public education.”

At this point, Stevenson, a Certified Public Accountant who, until recently, served as comptroller for the Children’s Home Society of Florida, stopped to express gratitude to the St. Augustine Jewish Historical Society, sponsors of the proclamation, for reminding the community that public education is the foundation of modern democracy and for reminding all St. Johns citizens of the role of Jews in establishing what has become a highly rated and well-regarded system of public schools.

Levy, although much travelled, lived for nearly 40 years in St. Augustine and is but one of the reasons the St. Augustine Jewish Historical Society labors to revive the Jewish history of North America’s oldest European city.