On Caracas streets, fear and eerie quiet as Venezuela mourns 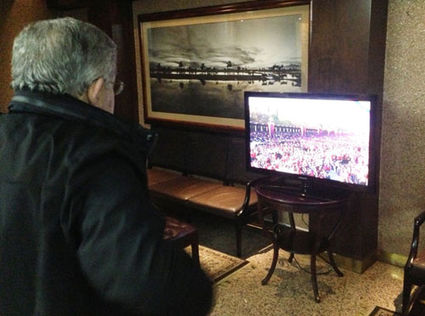 CARACAS, Venezuela (JTA)—Students at the Ma’or HaTorah yeshiva in Caracas knew something was afoot Tuesday [March 5] afternoon when bodyguards driving bullet-proof vehicles started showing up unexpectedly at the gate, whisking teenagers from wealthy families to the safety of their homes.

“After the second and third came, we realized this was serious,” Aron Misadon, a 16-year-old student at the school, told JTA on March 6. “At that point they closed the school and we all ran home.”

That something was the death of Venezuelan President Hugo Chavez, who had been gravely ill for months and had recently returned from months-long treatment in Cuba. The announcement sent many in Caracas into panic mode, fearing that the death of this larger-than-life figure—alternately loved or reviled by millions in his country—might lead to chaos in the streets.

Stores were shuttered, meetings were canceled and Venezuelans braced themselves. As the government announced a seven-day national mourning period, Jewish schools and the Jewish community center in Caracas all closed. The only activity in town seemed to be at the military academy, where Chavez’s coffin lay in state. He was to be buried last Friday.

The scheduled opening Sunday of a new Sephardic synagogue was likely to be postponed. The new shul, a multimillion dollar edifice, had been built to replace an older one in a part of town that had become unsafe. Under Chavez’s rule, Caracas has acquired one of the world’s highest murder rates, and violent crime is an omnipresent threat.

In the early hours after Chavez’s death, the fear was of the unknown. Venezuelan Vice President Nicolas Maduro’s accusation that Venezuela’s enemies had “inculcated” Chavez with his cancer, as unnamed foes had done to the late Palestinian leader Yasser Arafat, sent shivers down the spines of many Venezuelan Jews.

“We are very worried that his followers might decide to ‘avenge’ his death,” said Sammy Eppel, a local journalist who is Jewish.

But two days after his death, an eerie calm had taken hold. Driving down the four-lane highway connecting Simon Bolivar International Airport with downtown Caracas, David Bittan noted how quiet things were.

“So far, nothing has happened,” said Bittan, the Jewish owner of a car service company whose cousin, also named David Bittan, is the head of CAIV, Venezuela’s Jewish umbrella group. “I don’t think there’s any reason to worry right now. I think they are focusing on his funeral on Friday.”

At one point during the drive, Bittan noted a group of Chavista motorcyclists wearing red shirts and flying Venezuelan flags driving besides his SUV in a long line.

“They’re on their way to attend the procession of Chavez’s coffin,” he said.

That massive procession on March 6, which culminated in a huge rally at the military academy, was attended by Maduro and Bolivian President Evo Morales and was broadcast live on all five state-owned TV stations. Venezuelans of all stripes, both supporters and opponents of the late president, gathered around TV screens at gas stations, restaurants and bars to watch the proceedings.

“Our son, brother, teacher, revolutionary,” gushed a TV anchor, eulogizing Chavez. “His light will shine on.”

One woman interviewed during the broadcast said she would be forever grateful to Chavez for implementing a program that gave her a house for free.

“He was better than all of us,” she said. “This should not have happened. I will always have him in my heart.”

At a downtown hotel catering to businessmen located a few metro stops away from the military academy, the spectacle was received very differently. 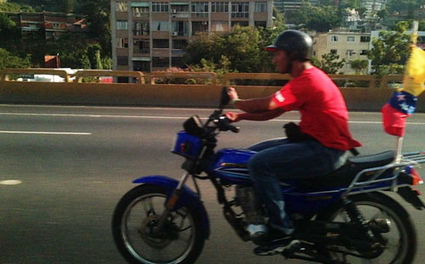 A Hugo Chavez supporter flying a Venezuelan flag on his bike in Caracas.

“All the supporters are government employees,” said one woman dismissively. “They are not forced to go, but they feel under pressure to show up. They might lose their job if they don’t.”

By nightfall on March 6, the streets of Caracas had emptied out—even more so than usual.

Vendors at a supermarket in the Altamira neighborhood said they ran out of water bottles as locals rushed to stock up on basic foodstuffs.

Nearby, a large poster of Chavez, one of many around town showing the leader known as El Comandante in various outfits and poses, depicted a youthful Chavez in a red beret and olive-green military uniform, raising his right fist aloft.