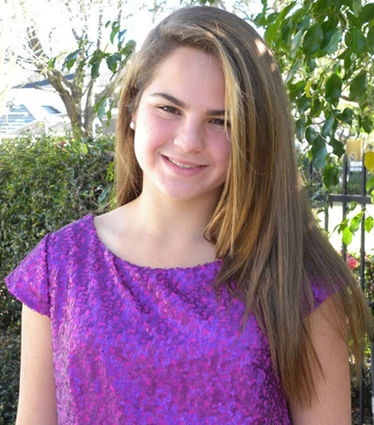 Sydney Elizabeth Perreault, daughter of Dale and Phil Perreault of Maitland, Fla., will be called to the Torah as a bat mitzvah on Saturday, April 6, 2013 at Congregation of Reform Judaism in Orlando.

Sydney is in the seventh grade at Lake Highland Preparatory School, where she is on the President’s list and was a cheerleader in the fall. She was a member of the Braveheart lacrosse team, played soccer for the LHPS middle school team and volunteered at the Coalition for the Homeless since first grade. Through the Remember Us Project, Sydney is remembering Serl Sazman, a 5-year-old girl who perished in the Holocaust. Sydney loves hanging out with friends and spending time with family, but most of all she loves her summers at Tripp Lake Camp in Maine.

Sharing in the family’s simcha will be her brothers, Daniel and Benjamin; grandparents, Dr. Lawrence and Sheila Pakula of Baltimore and Daniel and Judy Perreault of Heathrow; aunts, uncles, cousins and friends from Orlando and around the country.