More than 100 women and girls of different faith traditions gathered at the JCC’s Jack and Lee Rosen Southwest Orlando Campus on March 14 to share in a celebration of the Jewish holiday of Passover.

Event organizers said they hope it becomes an annual tradition. This seder was a chance to celebrate the guests’ diversity, learn about each others’ cultures and traditions, and enjoy friendship, mutual understanding and social interaction.

The evening opened with drama and music students from Windy Ridge elementary and middle schools performing “Tradition” from “Fiddler on the Roof.” The voices, costumes and dance moves provided entertainment and brought out emotion for the audience.

A banner hung behind the podium that expressed the sentiment of the evening with words meaning “peace” in different languages—Shalom, Salam, Paz, Peace, Shanti and Paix.

First, they sang “Hineh Ma Tov,” and a young girl stepped to the podium to explain its meaning in both Arabic and English.

Throughout the evening women and girls of many ages and varied faiths, including some families, took turns and stepped up to the microphone to read, sing and share. Some spoke in Arabic, Hebrew or Spanish as well as English, to read a portion of the seder service, a passage from the Quran, a story or poem, or to lead the group in a prayer.

Each segment of the Passover seder and each element on the seder plate was explained. The cups of grape juice were each drunk to honor inspirational women of the past and present and those to come.

Young Samantha Cohen, on the podium with her mother, Caryn, sang the traditional “four questions” in Hebrew. Other young girls named the 10 plagues that befell the ancient Egyptians, as those in the audience symbolically dipped their pinkie fingers in the grape juice for each one.

There were some additions to the ceremony as well as to the traditional seder table, to honor the evening’s themes of celebrating Passover with a more multi-faith emphasis, as well as a female perspective.

Students from Theater South performed an excerpt from “Anne Frank: Diary of a Young Girl.” Following this, Candy Dawson, whose husband, Greg, wrote “Hiding in the Spotlight,”  a book about his mother’s miraculous Holocaust survival, spoke about the need to stay hopeful about the future regardless of circumstances. As Anne Frank wrote so beautifully, it is important to still “believe that people are really good at heart.”

While honoring the women present and those in their communities, the event also mentioned women who could not be present or who were working for peace and change all around the world. There was much conversation, laughter and smiles at each table.

Shoshana Buchanan, co-chair of the event, said, “It’s important to bring women together, to get to know the women behind the images—the veils, the crosses or the Jewish stars. Events like this help to break down barriers and assumptions, and help us to get to know each other as individuals.”

Candace Martin, co-chair of the event and adult program director of the JCC’s Rosen Campus, added, “When women of different faiths come together, we’re able to strip away pre-conceived ideas and judgments. We’re able to break down barriers and build bridges of understanding and realize how much we have in common, despite our differences.”

Kim Barnes, whose husband, Bill, is the lead pastor at St. Luke’s United Methodist Church on Apopka-Vineland Road, said she enjoyed the experience of attending the women’s multi-faith seder. 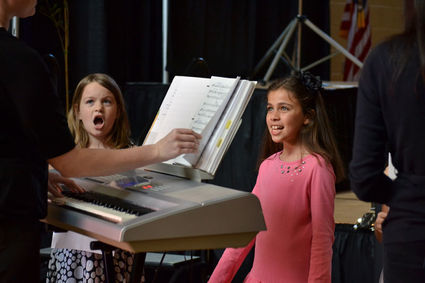 Hannah Martin and Samantha Cohen rehearse right before the program for their TheatreSouth performance at the Women’s Multi-Faith Seder.

“At St. Luke’s we’ve always been very involved with the local community and those of other faith traditions since we started here over 20 years ago.” She said that St. Luke’s even provided space for the Hebrew school before the Southwest Orlando Jewish Congregation was built. “It’s always been important for our church to do outreach, and we will continue to work with those of other faiths to help make our community a better place.”

Hajira M. Shujaat is president of the Muslim Women’s Organization, a local nonprofit. The MWO’s goal is to provide the opportunity for Muslim women to reach out to those of many faiths with friendship and community service, dissolving barriers of misunderstanding.

She said, “It was a humbling experience to attend my first Jewish seder. When traditions are shared, our hearts are opened to embrace the differences of those within our community. When we can celebrate our differences and join in our similarities, the communities we live in will thrive.”

Annette Gluskin-Habin is a freelance writer living in Orlando.