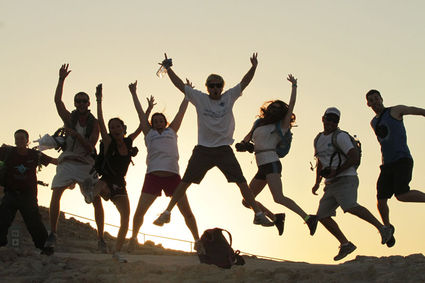 NEW YORK (JTA)—Meredith Ross will never forget when she first laid eyes on Lior, her partner for the past seven years.

Lior, an infantryman in the Israel Defense Forces, was escorting Ross’ Birthright Israel group on a free tour of the Jewish state when his friend, a fellow soldier, was killed. Lior was leaving to attend his funeral and had come to say goodbye.

The two 18-year-olds spoke for just five minutes, but it was enough.

“I remember borrowing someone’s phone to call my mother in the U.S., crying and telling her that I was in love,” said Ross, now 26.

Seven years later, they live together in Ramat Hasharon, a leafy suburb of Tel Aviv. The Chicago native completed her undergraduate degree in Israel and now works for a local start-up company.

“Birthright was an eye-opening experience for me,” Ross said. “And on top of that it made me so proud to be Jewish.”

Now entering its 13th year, Taglit-Birthright Israel’s goal is to strengthen the Jewish identity of its participants and their connection to Israel. Yet the popular program also has provided a platform for untold numbers of young singles to form lasting partnerships.

No data exists on just how many participants have met their spouses on the trip. Birthright knows of several dozen marriages, though anecdotal evidence suggests the number could be much larger.

“Because our main goal at Taglit is to strengthen Jewish identity and bring Jews closer together, we consider it a privilege that we’ve allowed hundreds of couples to meet and build Jewish homes around the world,” said Doron Karni, the vice president of international marketing for Birthright. “This is also in line with the findings of a study by Brandeis University that showed Birthright participants are 45 percent more likely to marry Jewish spouses.”

Of course, young couples finding love in Israel is nothing new. But Birthright’s scale, and its success in targeting participants who normally would not participate in an Israel trip, make its reach potentially far greater. The organization offers dozens of niche programs targeting particular interests and backgrounds, including cycling enthusiasts, fraternity brothers, foodies, recovering addicts and LGBTQ.

It was the LGBTQ trip that attracted Alicia Rosenbloom, who says she would never have gone on Birthright if it weren’t for what is known as the Rainbow Tour. She also wouldn’t have met her partner, Jordan Rubenstein.

In July 2011, the pair exchanged furtive glances at the airport in New York. During the layover in Zurich, they began chatting.

“By the time we got to Israel we were sitting on the bus together and talked a lot more,” Rubenstein said. “A few days in we were already an item.”

Over the next 10 days they hiked up Masada, roamed the alleyways of Jerusalem’s Old City and spent a night in a Bedouin tent in the Negev Desert. When they returned home, Rosenbloom moved from Philadelphia to New York, where Rubenstein works at Congregation Beit Simchat Torah, the LGBT synagogue in Manhattan.

This summer, on the second anniversary of their meeting, the two women will tie the knot at a ceremony in Queens.

“Religion wasn’t a big part of my upbringing,” Rosenbloom said. “I wasn’t bat mitzvahed, and I kind of felt Birthright was for people who were real Jews and real religious.”

Not all the romantic Birthright traffic heads east.

Michal Ezekiel moved from Israel to Los Angeles in 2010 to be with Max Simon, whom she met on the Tel Aviv beach in 2008. Simon was a recent graduate of the University of San Diego; Ezekiel was one of eight Israeli soldiers who accompanied his group on its Birthright tour.

“I was one of those people who went on Birthright just looking to get away from my life in L.A. and I had no idea what I was walking into,” Simon said.

A few months later, Ezekiel joined her family on a trip to California, where the two were reunited. He took Simon out for dinner on her birthday, followed by a romantic walk on the beach. In 2012, they were married in Israel.

“That was the first time we hung out outside of the trip,” Simon said. “We saw each other and we realized there was something there.”

For those who find love on Birthright, meeting their significant other is the main reward. For years it was widely reported that Michael Steinhardt, one of the program’s main funders, promised Birthright couples a free honeymoon in the Caribbean or Israel.

On its website, the Birthright organization makes clear that it does not provide honeymoons to couples who meet on the trip.

“Unfortunately,“ said Rubenstein, who is planning a post-wedding getaway to the Grand Canyon, “it’s an old wives tale.”