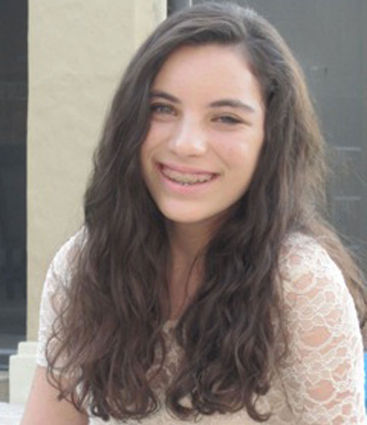 Shira Rebecca Weiss, daughter of Kevin and Rona Weiss of Winter Park, Fla., will be called to the Torah as a bat mitzvah on Saturday, April 27, 2013 at Congregation of Reform Judaism in Orlando.

Shira is in the seventh grade at Jewish Academy of Orlando, where she is a high honors student. She works on the yearbook and will be performing in the school musical, “Flapper,” in the spring. Her hobbies and interests include reading, photography, listening to music, playing the piano, theater and dance. Shira attends Camp Coleman each summer and is looking forward to going back again this year. She is in a dance company at Dancer’s Edge in Winter Park, which conducts performances throughout the year.

Sharing in the family’s simcha will be Shira’s brothers, Jordan and Ari; her grandmother, Harriet Weiss of Altamonte Springs; grandparents, Bernice and Haim Sayegh of White Plains, N.Y.; and her extended family and friends from Florida, New York, Virginia, Georgia and across the United States.