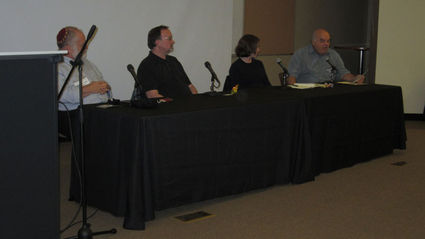 Scholars to St. Augustine Jewish Historical Society: The British have burned the documents you seek. In 1586, again in 1668 and yet again in 1702, British raids on St. Augustine led to the burning of records of births, marriages and deaths in the oldest city’s archives.

A group of scholars recently gathered at Flagler College to report to a public forum arranged by the St. Augustine Jewish Historical Society (SAJHS) indicated that these records would certainly be critical in identifying early Marranos, Conversos, New Christians and Crypto-Jews and their descendants. The scholars, including Flagler College professor John Diviney, doctoral candidate Diana Reigelsperger Miller and St. Augustine Historical Society senior researcher Charles Tingley, felt there was little choice but to seek out records of Florida activities in Havana, Cuba, and among the site of Inquisitional tribunals established in Lima, Peru, and in Mexico City, Mexico, in 1569 and in Cartagena de Indias, in present day Colombia established in 1610. The only other available sources are among the Archives General of the Indies in Seville, Spain, and among records held by the Vatican.

Three dozen participants gathered to hear from the panel of scholars and share their own thoughts, ideas and questions at the twice-yearly forum evaluating progress in seeking continental North America’s first Jews.  The work of the St. Augustine Jewish Historical Society has been buoyed by recent comments from Florida International University professor Abe Lavender, editor of the the Journal of Spanish, Portugese and Italian Crypto-Jews who has recently asserted that “there were most certainly descendants of Crypto-Jews in colonial St. Augustine.  The task before us is to document their presence.”

The Jewish Historical Society continues to seek out such documentation even while turning to the celebration of the 49th anniversary of the largest mass arrest of rabbis in the United States, as clergy gathered to support the work of the Rev. Martin Luther King in St. Augustine during June 1964.

Those interested in the work of the SAJHS are urged to contact the group at SAJHS1565@gmail.com or visit www.staugustinejewishhistoricalsociety.wordpress.com.