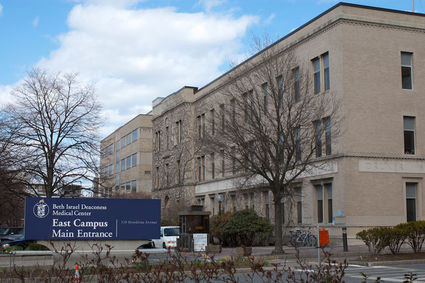 Beth Israel Deaconess Medical Center of Boston, where many of the injured in the Boston Marathon attack were treated, and where two Israelis are senior staff members.

Many of the injured in the Boston Marathon bombings last week were rushed to the Beth Israel Deaconess Medical Center. Several days later, on Friday, the two suspected bombers, Tamerlan and Dzohkhar Tsarnaev, were admitted, separately, to the hospital’s emergency room after sustaining wounds from their shootout with the police. The older brother, Tamerlan, later succumbed to his wounds.

Jewish immigrants founded the Beth Israel Hospital in Boston in 1916. Eighty years later, it merged with the nearby Deaconess Hospital. Two of its most senior staff members are Israelis, both of whom were actively involved in the unfolding drama of the past several days.

Associate professor Kevin (Ilan) Tabb has served as the medical center’s president and chief executive officer since September 2011. Tabb studied medicine at the Hebrew University, where he also got his bachelor’s degree. According to the Beth Israel Deaconess website, the U.S.-born Tabb “emigrated to Israel at the age of 18 and served in the Israel Defense Forces.” The site notes that Tabb completed his residency in internal medicine at the Hadassah Medical Center, and after 20 years in Israel, returned to the U.S.

“Unfortunately, the way events unfolded was very similar to what we have become used to in Israel,” Tabb told Israel Hayom over the weekend. “It is difficult, but you check you emotions at the door and treat any patient that arrives.”

Tabb praised the hospital’s medical team for doing “an amazing job.” He noted that the suspected bombers were given the same level of medical care as their victims.

“One of the [Tsarnaev] brothers died shortly after his arrival; the other one arrived in serious condition and has since stabilized,” Tabb said. “Whenever an injured party arrives at the emergency room, at the trauma section, the doctors and the nurses do what they are trained to do, and forget everything else.”

Associate Professor Daniel S. Talmor, who is the director of trauma, anesthesia and critical care in the Anesthesia, Critical Care and Pain Medicine Department of at Beth Israel Deaconess, echoed Tabb’s comments.

“There was a feeling of deja vu,” Talmor told Israel Hayom. Talmor was born in Jerusalem and studied medicine at Ben-Gurion University of the Negev, graduating in 1991. He arrived in Beth Israel Deaconess 12 years ago as part of a fellowship and chose to stay in the U.S.

“I can remember how, when I worked at the Soroka Medical Center [in Beersheba], we used to have injured soldiers lying next to terrorists,” he said. “Luckily, [before the bombing] all the hospitals [in the Boston area] had already been reinforced because of the marathon, but rather than dealing with dehydration, they had to treat trauma patients. The past 36 hours were pretty frightening, with sirens howling all the time, and I could even hear shots being fired near my house. I am pretty sure that people around here are now going to understand Israel a little better now.”

This story was originally published by Israel Hayom and is distributed with the permission of that newspaper.