Breaking with all black, some Chabad men pushing fashion boundaries 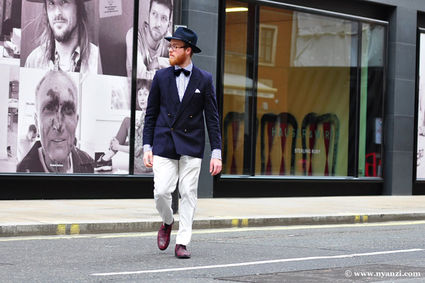 Yosel Tiefenbrun, an apprentice tailor at Maurice Sedwell’s and an ordained Orthodox rabbi, modeling an outfit he put together.

NEW YORK (JTA)—Yosel Tiefenbrun looked in the mirror and he liked what he saw.

The 23-year-old Chabad rabbi and apprentice at Maurice Sedwell, a bespoke tailor’s shop on London’s Savile Row, was wearing a vintage double-breasted jacket with gold buttons, tasseled Barker shoes, a claret bow tie and matching handmade hat and square handkerchief. Then he ran out the door to attend the “Oscars of tailoring”—the Golden Shears Award ceremony honoring the best in British fashion.

Several of his colleagues were in the running for a prize. They came back empty, but Tiefenbrun did not.

Nick Carvell, the online fashion editor at British GQ, snapped his picture and posted it the following day on the magazine’s website, naming Tiefenbrun “best in show.” Within days, the photograph of the hasidic rabbi and his natty attire was picked up by Jewish publications around the world.

“This is a very important message,” Tiefenbrun told JTA. “You can be a [religious] man and still be successful in whatever you do if you are constantly working on yourself and keeping your Jewish life alive.”

Hasidic Jews are well known for flouting the conventions of contemporary fashion, adhering to a strict dress code that originated in Eastern Europe and emphasizes modesty and piety. For men, the uniform mandates a black hat, coat and pants with a white shirt.

But in recent years, some haredi Orthodox women have sought to push the limits of tznius, or modesty, wearing more elaborate and, in some cases, slightly more revealing clothes. Now a group of young men affiliated with the Chabad hasidic movement are doing the same, in some cases breaking dramatically with their community’s sartorial codes.

Last year, Rabbi Dovi Scheiner and his wife, Esty, a Chabad couple who run the “boutique” SoHo Synagogue in Lower Manhattan, were named among the Big Apple’s 50 best dressers by Stylecaster, a fashion news website. The 36-year-old rabbi posed for the online outlet sitting on a velvet chair wearing a smart gray suit and laceless Converse sneakers.

Rather than seeing their sartorial sensibilities as a departure from traditional dress, this new crop of fashionable hasidim tend to see being stylish and religiously observant as complementary.

“Look at the rebbe,” said Sacho, referring to Menachem Mendel Schneerson, the late spiritual leader of Chabad. “When he was young, he was a very well-groomed man. The style he wore in the ‘50s in France is the style many Chabadniks are now adopting.”

Photos of Schneerson from the period show him in dapper outfits that sharply contrast with the conservative look he adopted later as Chabad’s leader.

Samuel Heilman, a Queens College sociologist and co-author of a biography of Schneerson, said the rebbe’s followers have tended to overlook those years in Paris, partially because of the liberal taste in clothes he exhibited.

“[In his youth] he dressed in a much more cosmopolitan fashion, sometimes wearing a beret,” Heilman said. “In the absence of a living rebbe, there are capacities for all these hasidim to project on the rebbe all sorts of things that would not be possible if he were alive.”

Tiefenbrun, who served as a religious emissary in Singapore for two years before returning to London, wears suits that are much more ostentatious than the subtly augmented frocks sold by Sacho. On his Tumblr page, Tiefenbrun posts photos of himself in outfits not commonly seen on hasidic men. His style favors boldly colored shoes, trendy hats, bow ties, sharply cut jackets and pocket squares.

Tiefenbrun spends a day-and-a-half each week learning his craft at Maurice Sedwell’s tailoring academy. The rest of the week he works the front desk, where he has waited on sheiks, soccer players and TV personalities.

One non-Jewish client, noticing his yarmulke, asked him for a blessing for his shirts. Another discovered they had a mutual acquaintance, the Chabad emissary in San Diego. But Tiefenbrun is careful to note that his clothing choices are his alone and not emblematic of any Chabad-specific trend.

“It’s not like it’s a Chabad thing, it’s me,” Tiefenbrun insisted. “I love art. I love quality clothing.”

With its sprawling global network of emissaries working to inspire religious observance among secular Jews, it’s perhaps little surprise that Chabadniks are practically alone within the hasidic world in pushing the boundaries, if gently, of their community’s dress codes. 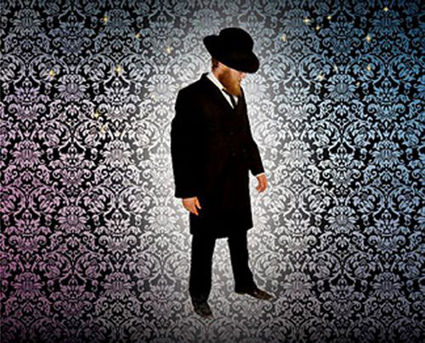 Yosel Tiefenbrun modeling his kapotas, which have gained mainstream media attention for their innovative take on the frocks.

“One can make the case Chabad, more than any other hasidic group, is in direct contact with the non-hasidic world, so they have a real good feel for that world outside,” Heilman said. “They have learned how to recruit there.”

Sacho said there is little interest in his stylish kapotas from members of other hasidic communities. Chabad men are selling “a product called Judaism” to the wider world, he said, and that tradition impacts their choice of clothes.

“People will listen and appreciate you more if you dress well and look presentable,” he said.

Within the confines of the hasidic community, however, it’s often a different story. Young customers come in looking for one thing, but then their mother arrives and “chews my ear off,” Sacho said.

But still, Sacho insists the style-conscious community is growing in the Chabad world and someday kapotas like his will be the norm.

“There are quite a few of us,” Sacho said. “All my clients are younger. It’s the future.”