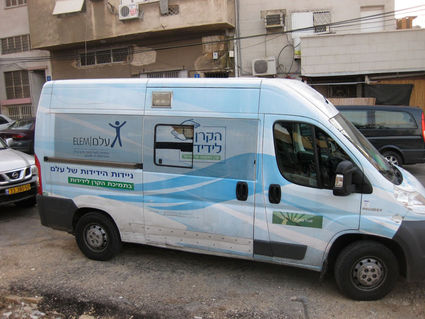 A van of ELEM, which aids at-risk youths in Israel. Nava Barak, ex-wife of Ehud Barak, is at the forefront of ELEM’s efforts.

ELEM vans go where the children are in Israel—venturing into dark and dangerous streets. The vans, and the volunteers on them, go to places where already-troubled children—some involved with vagrancy, drugs, homelessness, sexual exploitation, or other criminal or anti-social behavior—can encounter greater peril.

At the forefront of these efforts to get troubled youths off the street is the ex-wife of former Israeli prime minister and defense minister Ehud Barak.

“Kids know the van means safety,” Nava Barak, president of ELEM-Youth in Distress in Israel, said in an interview with JNS.org. “The vans go to center city and look for the youth to give them emergency help on the spot.”

ELEM’s mobile outreach centers offer a lifeline to youths in the form of treatment and social services, or a ride to one of ELEM’s eight centers throughout Israel, from Kiryat Shmona to Eilat, where the troubled youths can get a hot shower and a safe place to sleep.

Barak noted to JNS.org that ELEM’s 2012 organizational report, recently presented to Israeli President Shimon Peres, focused on two areas: drugs and discrimination. In the Jewish state, youths including immigrants, the Orthodox, Israeli Arabs, and other Israelis are all among those who face “social problems, adjustment and identity issues, family difficulties, drop-out and alienation from studies and/or a tendency towards dangerous behaviors,” the report states.

According to the study, boys who need help outnumber girls 2 to 1. Immigrant youths of Ethiopian background and those from the former Soviet Union represent more than half of those in need of services, ELEM says. The report details how almost 30 percent of current Israeli teens have used so-called “soft” or “designer” drugs, according to ELEM. The use of drugs in social and recreational settings is rampant.

Dr. Simcha Getahune, head of field services for ELEM, writes in the report that providing services to at-risk youths and families aims “to have an impact not only on the youths but on the community as a whole, promoting holistic change and community empowerment.”

JNS.org asked Barak what she believes to be at the root of these problems. The issue “stems from the difficulties in the cultural divides,” she said.

“The children of the immigrants can cope with the situation, but the parents are falling far behind,” Barak said. “There is a massive tension between the children and their parents.”

According to Barak, economic problems in Israel “add to the tension.”

“Some of the Ethiopians are very poor and suffering economic hardship,” she said. “When the kids leave their own neighborhoods they feel excluded from Israeli society. Even at school… they feel a kind of discrimination. Because they have no social relationship with most Israelis, a kind of tension is created—leading to more and more violence—even violence between Ethiopian groups. It’s resulting from their frustration.”

Barak said ELEM needs “more frameworks to work with us, from the government and the whole society.”

“This has a dangerous feeling, like a ticking time bomb,” she said. “ELEM wants to sound an alarm against it.”

Barak noted that some Ethiopian Israelis can assimilate well, but problems often arise for those who have difficulty understanding the social code in Israel. “[ELEM is] trying to break through barriers and work with the kids,” she said.

ELEM is work to improve the social literacy, job-hunting skills, and schooling situations of Ethiopian immigrants. The immigrants’ parents “are often illiterate and come from an agrarian society,” Barak said.

“Their kids go to Israeli schools; the change is very quick and very complex,” she said. “The kids adapt to the modern world very, very quickly; the parents have little connection with contemporary Israeli society.”

Historically, most children on the Israeli streets have come from secular Israeli society, but more and more of these children now come from ultra-Orthodox communities. Those children, too, turn to ELEM. Asked about the willingness of ultra-Orthodox rabbis to accept help from outside their communities, Barak responded that “some of the rabbis are actually asking ELEM for help with their youth in distress—they admit to having the same problems as chiloni (secular) society.”

ELEM has also developed projects dedicated to helping Israeli Arab and Bedouin youths. The organization says it has made contact with more than 20,000 Jewish and Arab Israeli at-risk youths over the past 12 months.

“This is not a joyful industry,” Lenore Ruben, president of the U.S. branch of ELEM, told JNS.org. “The overwhelming power of the work ELEM does, very simply, saves lives.” ELEM, Ruben said, is “dedicated to the treatment and rehabilitation of abused, neglected and adjudicated youth.”

“When one of our kids is accepted to the IDF (Israel Defense Forces), we know we have done well,” she responded.

Barak said there is “no mandate” that troubled Israeli youths “have to come to ELEM.”

“We have to earn their trust,” she said. “We often don’t know how far we’ve come until we have the opportunity to see what’s behind us. When life is afuk al afuk— topsy-turvy—kids can come to ELEM to get help.

Barak said it is “wonderful” when kids who were able to benefit from ELEM’s efforts go on to become ELEM volunteers.

“Several have even progressed through the army, gone to social work school, and are now employed by ELEM,” she said. “They got so much from the project, they want to give back.”