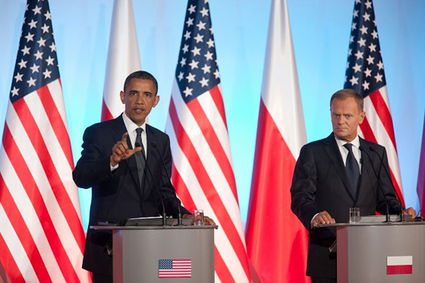 WASHINGTON (JTA)—Poland is a stalwart American ally in Europe, a bulwark against an increasingly belligerent Russia and, with the recent opening of a major new Warsaw museum, is enjoying a flush of accolades for its belated embrace of its Jewish roots.

But there’s a thorn in the bouquet: Poland is seen as having the world’s worst record on the restitution of Jewish property lost during the Holocaust.

Officials of Jewish groups seeking restitution say they will be making a renewed push to put the restitution issue on Congress’ agenda and expect new pressure to advance the issue. But ratcheting up the pressure on Poland poses an acute dilemma for U.S. policymakers.

The country’s outlier status—it is the sole European country that does not offer private property restitution to survivors of the Holocaust or their heirs—makes it an obvious target for Jewish activists. But Poland is also among the most reliable U.S. allies and has close relations with Israel and American Jewish groups. Poland’s foreign minister, Radoslaw Sikorski, will be featured next month as a guest at the American Jewish Committee’s annual conclave.

Perhaps as a result, few Jewish officials or members of Congress were willing to discuss the issue on the record. Requests for comment from the Polish Foreign Ministry and the Polish Embassy in Washington were not answered.

Efforts to pressure the Poles have remained largely in the realm of the rhetorical, with no legislation proposed to address the problem as was done in the past on other thorny issues of Holocaust restitution, like unpaid Holocaust-era insurance policies.

In January, during confirmation hearings for U.S. Secretary of State John Kerry, Sen. Ben Cardin (D-Md.), the co-chair of the congressional Committee on Security and Cooperation in Europe, sought reassurances that Kerry would continue to press Poland on the issue.

Cardin noted that Poland tells heirs seeking compensation to turn to the country’s courts, an arduous and expensive process. It’s also a process likely to fail because the government refuses to advance legislation that could underpin such litigation.

Recourse to the courts, “a process that presents insurmountable obstacles for most victims of property theft and especially victims of the Holocaust, will ultimately be futile for most claimants, and even for a tiny fraction of successful claimants would be drawn out and needlessly burdensome,” Cardin said.

Kerry replied that he would “continue to encourage Poland to address property claimants’ concerns quickly and fairly.”

More recently, Wendy Sherman, the undersecretary of state for political affairs, brought up restitution in a March 17 security meeting with Polish officials.

Douglas Davidson, the State Department’s special envoy on the Holocaust, also is deeply involved in advancing the restitution issue, Jewish organizational leaders said. Davidson, who was traveling, could not be reached for comment.

Jewish officials also said that the Obama administration has been engaged on the issue, with the president himself bringing it up in his meetings with Donald Tusk, the Polish prime minister.

Such entreaties, however, have largely failed to move the Polish government.

In November, Poland sent only a low-level diplomat to a conference in Prague on restituting private property. The conference featured the presentation of a paper by the Claims Conference and the World Jewish Restitution Organization describing the treatment of the restitution issue by successive Polish governments as a backward trajectory.

“While the government has issued numerous draft laws with respect to regulating private property restitution, Poland has never enacted a single law pertaining to immovable properties seized from private owners in the country during the Holocaust era and its aftermath,” the paper said.

In part, the problem is a result of vastly decreased U.S. leverage over Poland, where the restitution of private property remains deeply unpopular because of the potential for upheaval among the current residents of the properties. Restituting communal property such as synagogues and graveyards is more straightforward.

Moreover, nations that once cultivated U.S. Jews in their quest for membership in the North Atlantic Treaty Organization are now members of the alliance. And they have thriving economies, to boot.

An official of another Jewish group, speaking on background, said one avenue of pressure could be to withhold Jewish support for Poland achieving visa waiver status, a measure that would allow its citizens to enter the United States for 90 days without a prearranged visa.

But Rabbi Andrew Baker, the American Jewish Committee’s international Jewish affairs director, said such a move would be counterproductive.

“These issues are not popular with the domestic constituencies in any of the Eastern Europeans countries where we’ve pressed it,” Baker said. “The last thing we want is to make it more unpopular.”

Is everyone (including the author) aware that Poland is not the same country as it was before WWII, or during Communism? 6 Million Poles were killed, half of which Christians. Christians don't have special rights for property restitution... Why should Jews?(Honest question.) Warsaw was razed in 1944. Poland lost much territory in current Ukraine, Belarus, and Lithuania. I hate what the Germans, and Soviets did to Jews and Poland, but you can't hold current Polish citizens accountable. Shalom.

What, Jews wining about money?! Shocking.