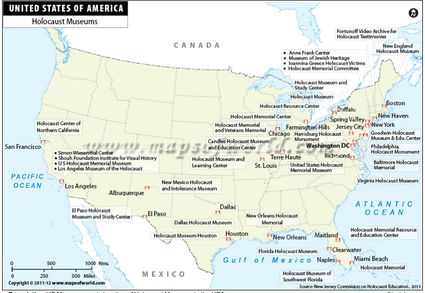 A U.S. map representing the locations of Holocaust museums.

NEW YORK (JTA)—No earth was moved last month at the groundbreaking of one of the nation’s newest Holocaust memorials.

Instead, the gatherers stood silently, symbolic shovels in hand, on the immaculate lawn where the privately funded $400,000 monument will soon rise. A succession of speakers delivered somber homilies remembering one of the darkest chapters in human history.

“It was an absolutely unbelievable world that I lived in,” survivor Fred Lorber was quoted as saying by local media. “It’s hard for me to describe, but whatever time I think about it, it’s there. It never left my memory.”

The construction of a new Holocaust memorial is hardly unusual. But this was Des Moines, Iowa, home to a small Jewish community and an even smaller number of survivors.

Just 2,800 Jews live in the capital of the Hawkeye State, among them a rapidly diminishing number of survivors like Lorber. Yet local authorities, along with the Jewish Federation of Greater Des Moines and Jewish philanthropists, nevertheless felt it important for the city to set aside prominent public space near the state capitol to remember the victims of Nazi persecution and their liberators.

“As time went by and as the last survivors pass away, the study of the Holocaust in the school districts began to wane and the Jewish community felt the memory of it needed to be perpetuated,” said Mark Finkelstein, the head of the federation.

The Jews of Des Moines are hardly the first to push for such a project.

Though precise numbers are difficult to come by, Holocaust studies experts say museums and monuments dedicated to the genocide have proliferated across the United States over the past two decades.

Major American cities typically have at least one Holocaust memorial, but now many midsized ones do too, like Richmond, Va., Charleston, S.C., and El Paso, Texas. Memorials are even found in relatively small cities, like Whitwell, Tenn., and Palm Desert, Calif. And more are in the works, including a recently approved monument designed by architect Daniel Libeskind to be built on the statehouse grounds in Columbus, Ohio.

The phenomenon is also not a uniquely American one. Norway, a country with only 1,300 Jews, has two Holocaust memorials.

“There are probably more than 300 Holocaust study centers and museums around the country, and the number of memorials would be hard to track down because of all the small ones,” said James Young, a professor of English and Judaic studies at the University of Massachusetts in Amherst and the author of a book about Holocaust remembrance.

“Just in Manhattan, there are 80. Multiply that and you probably have thousands.”

Young says the single most important factor driving the construction of Holocaust memorials nearly 70 years after the war is the initiative of elderly survivors. With the youngest of them nearing 80, survivors are eager to educate future generations about their suffering and, in so doing, give meaning to their lives.

“It doesn’t take a big community,” Young said. “If someone is inspired to build a memorial site, it is possible to do so.”

One such person was Eva Mozes Kor, 79, who along with her twin sister was subjected to savage medical experiments carried out by Nazi war criminal Dr. Josef Mengele.

In 1995, Kor founded the CANDLES Holocaust Museum and Education Center in Terre Haute, a small city in western Indiana where she has lived since the 1950s, with the aim of sharing her story with her neighbors.

Each year about 75,000 mostly non-Jewish children visit the center from nearby rural areas of western and central Indiana. Kor and two other survivors, including her husband, present lectures to the young visitors.

“I want to teach children in the world,” she said. “I think [the Holocaust] is not a Christian thing, not a Jewish thing, it’s a human thing.”

For Jewish leaders, Holocaust memorializing is often a way to build community around a non-religious issue.

“The creation of a Holocaust memorial is likely something everybody can cooperate on,” said Jonathan Sarna, a professor of Jewish studies at Brandeis University. “The minute you touch Israel, it’s divisive. But for Jews and Christians to get together to commemorate the Holocaust, that can bring them together, especially in smaller communities.”

But Holocaust commemoration also has been driven by Christians such as Michael Tudor, a Louisiana lawyer and a Baptist. He came up with the idea of building a Holocaust memorial while jogging past a sculpture by the Israeli artist Yaacov Agam in New Orleans dedicated to the memory of the victims.

If everything goes according to plan, Tudor will break ground on a Holocaust memorial in his hometown of Alexandria (population: 47,000) in November.

“I can think of many reasons we ought to have one even though we are a small city,” Tudor said. “There’s a real historical tie to the liberation of camps. And we’ve always had a vibrant Jewish community for a small town. They’ve been the foundation blocks of our community.” 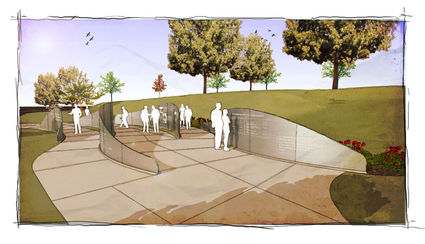 The privately funded $80,000 structure will feature an 18-foot granite obelisk—“because 18 is a symbolic number in the Hebrew tradition,” Tudor said—and be engraved with the famous poem “First they came” by the German pastor Martin Niemoler.

The memorial also will remember local U.S. soldiers who participated in the liberation of the camps, as well as the victims and survivors.

“The greatest generation is dying out and people’s memories are fading,” Tudor said. “You realize, if not now, when?”

Young expects that with the youngest survivors becoming octogenarians, the trend is unlikely to continue indefinitely. Once they pass, the money and motivation for such projects may disappear as well.

“The next generation,” Young said, “might be less likely to be doing this.”