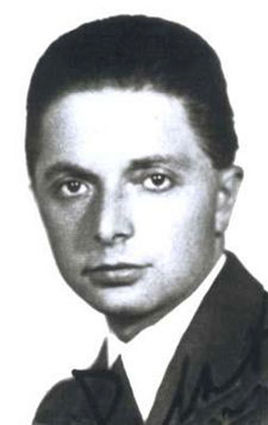 NEW YORK (Corriere della Sera Online)—His Wikipedia page remembers him, in at least 10 languages, as “the Italian police commissioner who saved thousands of Jews from being deported to Nazi extermination camps during the Second World War and for this was deported to the Dachau Concentration Camp, where he died.”

“For his actions,” according to the free encyclopedia, “Giovanni Palatucci was decorated with the ‘Medaglia d’oro’ award for civil merit, and honored as one of the ‘Righteous Among the Nations’ by Yad Vashem (Sept. 12, 1990) and ‘Servant of God’ by the Catholic Church.”

But a growing chorus of historians and scholars who for years have been studying the most celebrated of “righteous” Italians are saying Palatucci is nothing but a myth, a sensational fraud orchestrated by the alleged hero’s friends and relatives who claim he saved more than 5,000 Jews in a region where there lived fewer than half that number of Jews.

The hypothesis of a massive rescue mission by Palatucci already had been categorically denied by the Italian Ministry of Internal Affairs in a memorandum dated July 1952, and later by Yad Vashem’s Institute of the Righteous commission in 1990.

At a roundtable discussion organized by the Primo Levi Center at the Casa Italiana Zerilli-Marimo in New York, the ex-director of Yad Vashem, Mordecai Paldiel, said that under his supervision, Palatucci was recognized in 1990 as Righteous Among the Nations for having helped “just one woman,” Elena Aschkenasy, in 1940. Paldiel also said the commission “did not find any evidence or testimony that he might have assisted anyone outside of this case.”

Yet in 1955, the Union of the Italian Jewish Communities recognized Palatucci, and in 1995 the Italian government decorated him with the Medaglia d’oro award for civil merit. During the ecumenical ceremony for the Jubilee on May 7, 2000, Pope John Paul II included Palatucci among the martyrs of the 20th century. In 2004, the diocesan phase of the canonization process concluded officially naming the hero who died in Dachau in 1945, at age 36, a “Servant of God.”

But who conducted the historical research on which these recognitions were based? What spawned the myth of the “Italian Schindler”?

­The official biographies—the latest of which, “Giovanni Palatucci: a right and a Christian martyr,” by Antonio De Simone and Michele Bianco with a preface by Cardinal Camillo Ruini—speak of thousands of Jews being sent to the internment camp in the town of Campagna. They would have been protected there by Bishop Giuseppe Maria Palatucci, Giovanni’s uncle—who in 1953 called the notorious camp a “vacation spot.”

The biographies then recall the 800 Jewish refugees who in 1939 secretly boarded a Greek ship, the Agia Zoni, that departed from Fiume on March 17, 1939 headed for Palestine in an operation organized personally by Palatucci.

But from the diary of the group’s guide preserved at Yad Vashem and the documents of the port authority collected in the Italian State Archives, it becomes clear that it actually was an operation of the Jewish Agency of Zurich carried out under the strict watch of Palatucci’s superiors. Not only did these superiors exact a painful process of extortion, they also sent back to the border the neediest refugees, the stateless and those who came from Dachau.

Also from the archives, we find that Palatucci was an officer of public security at the police headquarters in Fiume from 1937 to 1944, where he worked in the immigration bureau and was in charge of the census of Jewish citizens on the basis of which the Prefecture applied Mussolini’s racial laws. In Fiume, the census was conducted so thoroughly and the laws applied with such zeal that it provoked international protests and a reaction from the Ministry of Internal Affairs.

According to the monograph by Silva Bon titled “The Italian Jewish Communities of the Province of Kvarner Rijeka and Opatija (1924-1945)” and the data collected in the “The Book of Memory” by Liliana Picciotto, during Palatucci’s brief regency the percentage of Jews deported from Fiume was among the highest in Italy. “There Would Be Enough,” the recently published family portrait by Silvia Cuttin, clearly and accurately depicts the tragic experience of the Jews of Fiume.

In “Giovanni Palatucci: A Proper Memory,” Marco Coslovich reconstructs the ambiguous professional profile of a 30-year-old vice commissioner of police who swears loyalty to the Republic of Salo.

“Palatucci never served as chief of police in Fiume,” Coslovich reveals, “but as an adjunct vice commissioner under the control of superiors who were notoriously anti-Semitic.”

As opposed to being in conflict with superiors, documentation shows that Palatucci was considered a model public servant and fully enjoyed their favor. He was considered to be “irreplaceable” by the prefect Testa.

Between April 1944 and the beginning of September of that year, Palatucci was regent and directly dependent to the upper echelon of Salo, Tullio Tamburini and Eugenio Cerruti.

Historian Michele Sarfatti in the episode of the television program “La storia siamo noi” dedicated to Palatucci, expressed doubts in 2008 as to the plausibility of the disproportionate numbers attributed to a community that numbered just over 1,000. Further, between immigration and internment, the community was reduced to little more than 500 by October 1943.

According to the Venetian historian Simon Levis Sullam, the Palatucci affair is tied to the broader problem of how anti-Semitic persecution in fascist Italy—and the role Italians played in it—has been represented in the 68 years since the end of the war. Co-editor of a recent study on the Shoah in Italy published by UTET (2012), Sullam explains, “The myth of the good Italian has constituted a source of collective self-absolution after the Second World War regarding the support offered to anti-Semitic and racist politics in the period 1937-1945, in which thousands of Italians participated directly.”

Coslovich emphasizes how more than half of Palatucci’s personal dossier reflects the efforts carried out by his father, Felice, and his uncle, the bishop, aimed at completely rehabilitating the reputation of the commissioner with respect to ethnic cleansing. Additionally, the concession of a war pension accorded by law only to widows and orphans of the casualties of war (Palatucci was a bachelor) indicates the involvement of the Italian government in designating their relative as a “savior of Jews.”

Between 1952 and 1953, Bishop Giuseppe Maria Palatucci availed himself of the written collaboration of Rodolfo Grani, a Jew from Fiume of Hungarian origin whom he had met during Grani’s brief internment in Campagna. However, the historian Mauro Canali, an expert in the history of the fascist police system at the University of Camerino, maintains that in the copious documentary evidence regarding Grani, there is no indication that he ever met Giovanni Palatucci.

But someone who did meet Palatucci was the Baron Niel Sachs de Gric, also a Fiume-based Jew of Hungarian descent, a lawyer in the ecclesiastical court and representative of the Holy See for the Concordat with Jugoslavia. In 1952, the bishop sent de Gric an article for publication in the periodical Osservatore Romano with an “invitation” to take credit for its authorship. The documents attributed to Grani and de Gric—their authenticity demands to be verified, and neither received the commissioner’s assistance—launched the outsized version of Palatucci’s heroism.

The last piece of the legend to fall is the one connected to the circumstances of Palatucci’s death. The arrest warrant signed by Herbert Kappler and deposited in the Central Archives of State leaves no doubt: Palatucci was accused of treason by the Germans for having transmitted to the enemy (the British) documents of the Social Republic of Salo requesting negotiations for Fiume’s independence, not for having protected the Jews of that city.

Alessandra Farkas is the New York correspondent for the Italian daily newspaper Corriere della Sera, where this story first appeared. The article was translated by Steve Baker.