Which Waze next for the brand of 'start-up nation' Israel? 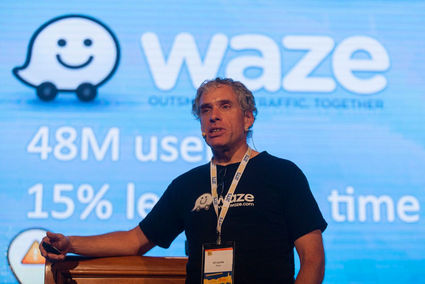 Google’s $1.3 billion acquisition of Waze, the Israeli-developed traffic crowdsourcing app that has won the hearts of 50 million users in 193 countries, is perhaps now recognized more for keeping the company in its Tel Aviv headquarters than for its nine zeroes, and is being touted as a national victory for Israel.

Yet, the pride that flowed from the agreement to keep Waze’s talent put (Netanyahu himself called company heads to say “You’ve reach your destination!”) indicates an underlying concern that big foreign buyouts could eventually erode Israel’s brand as the “start-up nation,” a term coined in the 2011 book by Dan Senor and Saul Singer.

Waze has created a narrative as a quintessentially Israeli company (barring its October 2011 Chinese venture capital (VC) injection and partial ownership by four other American investors), evolving as an outgrowth of Israeli society’s desensitization to sharing information, propensity to speak their minds, and aggressive drivers.

But as Waze eventually folds into Google, the Israeli influences that organically shaped it—or at least its origins as a “Silicon Wadi” start-up—may fade away from collective memory. Will this harm the company, or more significantly, harm Israel’s identity as the start-up nation? Not likely, says Grace Zimmerman, senior lecturer at Brandeis University’s International Business School.

“There are hundreds of products whose origins are in Israel that people all over the world use and enjoy without knowing that the technology originated in Israel,” Zimmerman tells JNS.org. “The same is true of products developed in other countries.”

Zimmerman cites innovation as the main deterrent against Israel’s brand erosion. “Israel is easily in the top 10 places in the world for VC activity and investment,” she says. “Clearly, the international VC community sees the value and opportunity that Israeli ventures provide. The best way for Israel to maintain its elite status as ‘startup nation’ is to continue to be an international hub of innovation.”

A look at other Israeli start-ups that struck American gold reveals their founders have by and large moved on to start or grow new start-ups in Israel while their former companies’ national identities have indeed faded from memory. To see this trend, one need not look further than Google, which began courting Israeli tech start-ups in the spring of 2010, when it acquired LabPixies—a company that created Web gadgets—for $25 million. Just six months later, Google paid $10 million for Herzliya-based startup Quiksee, which was developing a user-friendly platform for uploading videos to Google Maps.

Two days after the Waze deal was announced, two of the original LabPixies founders, minus Nir Tzemah, who remains at Google, founded Ubimo, a mobile marketing company that analyzes complex data for precision advertising. Ubimo is based in Tel Aviv and is in full start-up mode, seeking seed investment. LabPixies itself is virtually nonexistent, as it largely serviced the near-obsolete iGoogle gadgets. An announcement on Google’s blog declares that iGoogle and its gadgets will officially be discontinued come Nov. 1, 2013.

As for Quiksee’s founders, not one of them remained at Google. Though they never teamed up for a second venture, each plays a key role at separate companies with offices in Tel Aviv, mostly start-ups in industries ranging from online gaming to indexing global medical data and nanographic printing.

Regarding whether or not public recognition that a certain technology such as Waze was developed in Israel matters, Israeli entrepreneur Yoav Degani, founder and CEO of Aniways, a company that monetizes instant messaging apps by embedding contextual branded emoticons into users’ chat streams, tells JNS.org, “The average American user won’t necessarily know the history of the app even though it’s making a lot of noise now, but it’s not that important.”

Nonetheless, Degani notes that the chatter about untapped Israeli talent is making its way into the circles that count.

“What’s really important is that companies in Silicon Valley, investors and decision makers, will know,” he says. “And I’m sure you can’t find one of these guys today who hasn’t heard about Waze’s history.”

Continued Israeli brand recognition may only be relevant to Waze because it is a direct consumer product. American giants swallowing up promising Israeli start-ups is nothing new. Just last weekend, EMC, one of the world’s leading data-storage providers, quietly paid $200 million for Israeli start-up ScaleIO, which creates software that allows for scaling network storage.

Even less talked about is the whopping $5 billion Cisco Systems paid for NDS in March 2012. NDS is an Israeli company that delivers video and interactive entertainment to TV set-top boxes securely, and can hardly be called a start-up, as it has been around for two decades. The company has been a magnet for large media companies since first being acquired by News Corp. in 1992. It then went public and reprivatized after European Global Equity Firm Premira acquired it. Today, NDS is part of Cisco’s global conglomerate, with the only trace of its Israeli roots being one office out of its 22 located on Shlomo Halevi Street in Jerusalem.

More identifiable brands like America Online (AOL) have also absorbed Israeli innovation. AOL has had several lifecycles over the years, its most recent and arguably most successful being the role of content distributor. After acquiring The Huffington Post, AOL went on a spending spree for companies that would help it infiltrate virtually any niche market with written and video content. AOL found a perfect match in 5Min Media—an Israeli start-up that successfully syndicated tens of thousands of professionally produced instruction and lifestyle videos. Their content has grown into one of AOL’s main revenue streams, and while 5min still retains offices in Tel Aviv, there is little recognition that a large chunk of AOL’s global video content is Israeli-sourced and Israeli-spread. At the time of this story’s publication, Wikipedia’s AOL Acquisitions page even mistakenly listed 5Min Media as an American company.

Israel, always so concerned with its hasbara (public diplomacy), may not be so quick to forget the roots of its swallowed start-ups. Degani remembers AOL’s acquisition of the world’s first instant messaging platform, ICQ.

“It was the biggest acquisition for an Israeli company in the Internet and mobile arena and was in the news for many days,” Degani says. “I believe the next generation of Israelis will be proud of Waze and even feel part of their success. It’s a small country. When something is big enough everyone knows about it.”

While it is inevitable that brand erosion of Israeli start-ups may occur at the level of individual companies, the international players in the high-tech game will not forget where the talent is situated, Zimmerman and Degani say.

“Israel is awash with talented entrepreneurs,” Zimmerman says. “I have no doubt that we will see many more innovations coming from Israel.”

“Anywhere I go, as soon as I say I’m from Israel people immediately answer, ‘Oh, the start-up nation!’” Degani says. “This is how we are branded and I cannot believe it will change.”