From Star Trek to Jewish-themed photography 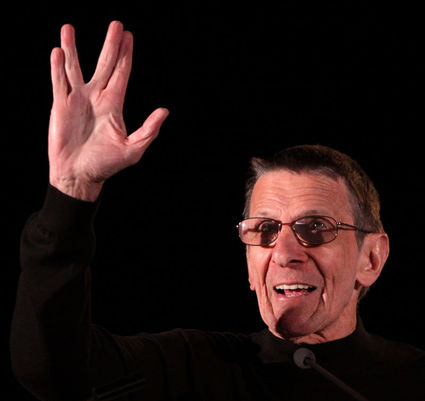 Leonard Nimoy, at the 2011 Phoenix Comicon in Phoenix, Arizona, gives his Vulcan hand gesture from “Star Trek”—a gesture he said was modeled after the Jewish kohanim.

Leonard Nimoy says there is a “strong strain of Judaism” in everything he does—including his famous on-screen hand gestures.

Best known for his character Mr. Spock in the “Star Trek” television show and movies, most recently in his cameo as Spock Prime in this year’s blockbuster “Star Trek Into Darkness,” Nimoy’s Vulcan hand gesture comes from an experience he had at synagogue when he was 8 years old.

Nimoy’s father told him not to look as worshippers averted their eyes during blessings recited by the kohanim.

“The men were chanting, shouting and praying in an Orthodox service,” Nimoy, 82, says in an interview with JNS.org. “It was very passionate, very theatrical. I was chilled by the whole thing.”

Years later, while on the set of the “Star Trek” television show, Nimoy suggested to the director that Vulcans like Spock should offer some gesture in greeting other Vulcans.

“The director asked me what I had in mind and I suggested the gesture used by the kohanim,” Nimoy says. The gesture went on to be accompanied by the expression “live long and prosper.”

Nimoy, born in Boston, recalls that he grew up “in a very Jewish environment and was bar mitzvahed appropriately when I was 13.”

“The neighborhood I grew up in had several synagogues, and I sang in the choirs for the High Holidays,” he tells JNS.org. “There is a strong strain of Judaism in everything I do. It is a presence that I do not deny and do not want to deny. It is a valuable resource for me and a valuable part of my consciousness.”

Born to Yiddish-speaking Orthodox Jews from Ukraine, Nimoy narrated the documentary “A Life Apart: Hasidism in America” in 1997, about the various sects of Hassidic Jews. In October 2002, Nimoy published “The Shekhina Project,” a photographic study inspired by Kabbalah. exploring the feminine aspect of God’s presence.

According to Rich Michelson, owner of the Northampton, Mass.-based R. Michelson Galleries, the best art often opens up a societal debate—and Michelson believes Nimoy’s religiously controversial “Shekhina Project” certainly did so when it was published and shown to the public in 2002.

A feminine word in Hebrew, Shekhina is the Talmudic term for the dwelling or settling of God’s divine presence on Earth. Over time, the concept of Shekhina evolved in more progressive Jewish circles into a softer, empathetic feminine counterpart to God who could argue for humanity’s sake, comfort the poor and sick, and stand as the mother of Israel.

“[Nimoy’s] depiction of women—some wearing tefillin and nothing else—as the essence of the feminine manifestation of God struck some as revolutionary and others as salacious,” Michelson tells JNS.org. “The response in our gallery was overwhelmingly positive, as it was in most venues where we toured the exhibit. There were some synagogues that refused to show the work, and others that canceled Mr. Nimoy’s speaking engagements, but in almost all cases, another synagogue was happy to step in and host the exhibit.”

Nimoy has a long list of activities he has participated in that have to do with his Judaism.

“I surprised a lot of people by playing Tevye in ‘Fiddler on the Roof’ in 1971 on an eight-week eastern tour that was very successful,” he says.

Barbara Gellman-Danley presented Nimoy with an honorary Doctorate of Humane Letters from Antioch University in a ceremony at his home in California. A former graduate of Antioch with an M.A. in bilingual education, the honorary degree was awarded in great part due to Nimoy’s activism in Holocaust remembrance.

Nimoy produced and starred, with Dabney Coleman and Blythe Danner, in a television movie called “Never Forget.” Written by Ronald Rubin, the 1991 film is a dramatization of a Holocaust survivor who confronted a Holocaust denial organization’s lies in court. Nimoy met the survivor, Mel Mermelstein.

“Mermelstein’s family was taken into Auschwitz during the second World War,” Nimoy says. “His siblings and parents were killed. He won his lawsuit, but more importantly, the subject of the Holocaust went into American law for the first time in 1979. It became a legal fact.”

Gellman-Danley says Nimoy’s fame never got in the way of his commitment to social justice causes.

“Indeed, he worked in key symbolism of his own faith into his character as Mr. Spock,” Gellman-Danley tells JNS.org. “I recall he was very committed to organizations, museums and affiliated projects that reflected his own value system. He is a consummate artist—both performing, writing and through beautiful photography. I found Mr. Nimoy to be a very caring, deep and committed man who is leading a measurably purposeful life.”

Nimoy’s portrayal of Mr. Spock in “Star Trek” earned him iconic status as well as three Emmy nominations. But aside from his numerous credits as an actor and director, Nimoy is also a successful recording artist and author, having published two autobiographies as well as several volumes of poetry, two of which also feature his photographs. His photographs are in the collections of many major museums, including the Museum of Fine Arts in Houston, the Judah L. Magnes Museum, the Los Angeles County Museum of Art, the Jewish Museum of New York, the New Orleans Museum of Fine Art, and the Hammer Museum.

“I just produced a collection called ‘Eye Contact’ of 25 fine art prints,” Nimoy says. “The concept is that there is no eye contact with the models in the photographs. It has to do with the issues of privacy, neutrality, modesty and voyeurism.”

At Michelson’s website (www.Rmichelson.com), viewers can see Nimoy’s work and note his rising stature as a major contemporary American photographer.

“There is no doubt that Nimoy will always be identified foremost with Mr. Spock,” Michelson says. “But he is no dilettante with the camera.” 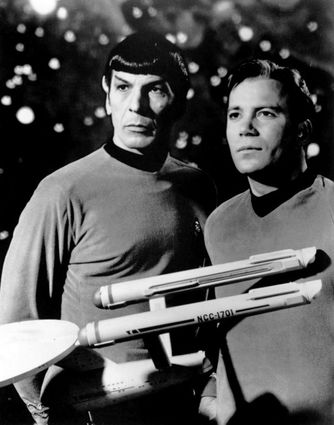 Leonard Nimoy and William Shatner as Mr. Spock and Captain Kirk from the television program “Star Trek” in 1968.

Yet, Mr. Spock remains the most enduring aspect of Nimoy’s fame. First airing in 1966, the character would become an icon over the years as “Star Trek” branched off into syndication and later onto the big screen as a series of six feature films. Being identified with one of the most recognizable characters in television history is intriguing to Nimoy, and it is something he embraces.

“I admire Spock, and if I had to choose any character ever portrayed in television or film, I would choose Spock because I enjoy being identified with this very interesting character,” Nimoy says.

“Spock claims to be other than human but he’s a terribly human character,” he adds. “That’s what makes him so attractive. People understand him and identify with him. His dilemma is a human dilemma. Particularly for young people. Teenagers really understand what Spock is dealing with, which is finding the proper balance between logic and emotion.”