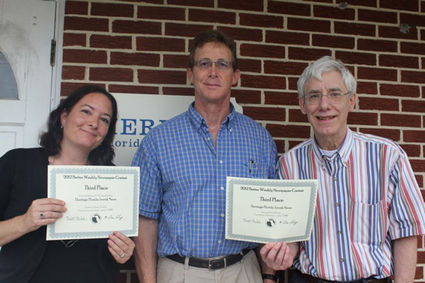 “I am very happy that we were fortunate enough to win two awards this year and I am especially proud that we received an award in the General Excellence category, which is considered one of the highest awards of the competition. Heritage was the only Jewish newspaper in Florida to receive any awards,” said Jeff Gaeser, publisher.

The awards were announced during the FPA/FSNE annual convention held at the JW Marriott at Grand Lakes in July.

Newspapers considered for the General Excellence award were judged by experienced editors and publishers from Pennsylvania and New York who evaluated each papers’ general and department news; the mechanical excellence; advertising enterprise; editorial page; general appearance; makeup and style and promotion of community interest. Comments given by judges who chose The Heritage for this award said they “enjoyed reading the variety of timely topics, and that it was very well written.”

Freelance writer Pamela Ruben’s story “Son of Nazi hero converts to Judaism and tells his story” (Heritage, Nov. 9, 2012 issue) won third place for Feature Story: Profile. Associate editor Michael Etzkin shares the award with her. Feature stories were judged on local appeal, originality and quality of writing. One judge commented that he was “interested all the way through. It was almost like I was at the event.”