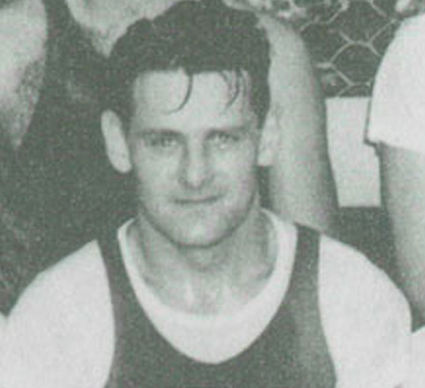 Long before Magic and Michael, before Kobe and LeBron, there was Ossie, the first scoring leader in the National Basketball Association—at least for a few seconds. Ossie Schectman, a Knicks guard and a onetime all-American at Long Island University in Brooklyn, died on July 30 at 94.  According to The New York Times, he was remembered as a central figure in the NBA’s creation tale. He scored the first 2 points in the league’s history and became something of a celebrity when the distinction was uncovered, 42 years and 5 million points later.

His pioneering layup inspired the title of “The First Basket,” a 2008 documentary by David Vyorst about the prominence of Jewish basketball players in the first half of the 20th century.  “The First Basket” is available on Amazon and Netflix, among other locales.

Oscar Schectman (everyone called him Ossie) was born on March 30, 1919, in New York City, one of five children of Jewish immigrants from Russia. He learned to play basketball at settlement houses and, more informally, by shooting balls through the low rung of a tenement fire-escape ladder. He then played for Samuel J. Tilden High School in Brooklyn.

Schectman played for LIU teams that won the National Invitation Tournament at Madison Square Garden in 1939, completing an unbeaten season, and again in 1941, at a time when the NIT was more important than the NCAA tournament.  Schectman later joined the Philadelphia Sphas of the American Basketball League, a team once sponsored by the South Philadelphia Hebrew Association, and then became an original Knick.  He was among players from the inaugural NBA game who were honored when the Knicks played the Toronto Raptors at Skydome in 1996 on the 50th anniversary of the league’s debut.

Schectman, whose death was announced by the Knicks, had retired to Delray Beach, Fla., after more than three decades in Manhattan’s garment industry and lived in Ardsley, N.Y., in Westchester County, in his final years.

Schectman is survived by his sons Stewart and Peter; a sister, Sunny Trumer; and two grandchildren. His wife, Evelyn, died in 2011.