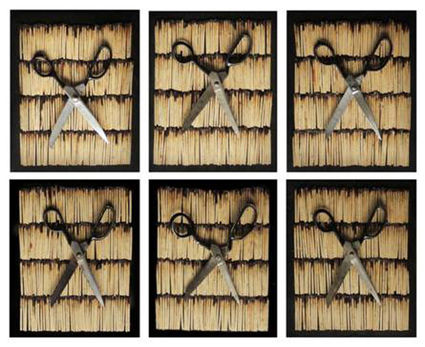 Since its founding more than 30 years ago, the Holocaust Center in Maitland has been using fine art as a vehicle to remind visitors of the importance—and the humanity—of victims of genocide.  Holocaust history is wrapped around the unfathomable statistic of six million Jewish people, including one and a half million children, dead.  Holocaust education, particularly as expressed through fine arts, acknowledges that within that unimaginable number one can see that it is one person who died, then another, then another, millions of times over, as families and communities were savaged and destroyed.

In planning its events in commemoration of the 75th anniversary of Kristallnacht in November 2013, the Holocaust Center searched for an exhibit that would speak to the meaning of that world-changing event. None of the exhibits available told the story as the Center’s staff wanted it told, so they decided to create their own new exhibition.

They put out a call to artists in January, asking for submissions that would explore history before, during, and after that assault. The artist entries, combined with panels that will include historic notes and eyewitness observations, will open at the Center in mid-September.

“We wanted to explore the history of that terrible event,” says Susan Mitchell, a staff member who has been part of the project. “We see this exhibit as explaining the arc, the context.  Jews had already been the victims of anti-Semitism for centuries, and by the mid-1930s they had lost basic citizenship rights in Germany. The moment of Kristallnacht, they say, is the end of the beginning and the beginning of the end.”

According to Mitchell, Kristallnacht was one of the most widely publicized events in human history.  “It’s clear that people throughout the world, people with access to newspapers, radios, and newsreel films, knew what Hitler was doing. The story of the Holocaust is never about others not knowing, it is really about not being ready and willing to intervene.”

“We want to start an honest conversation about what we mean when we say, over and over, Never Again,” she says. “We want this amazing art to inspire people, to give them the courage to act wisely on behalf of others.”

The artists, and their beliefs in how art can have an impact, are a critical part of that conversation.  One of the exhibitors, Helen Zajkowski, a native of Poland now living in Connecticut, says “My installation consists of six pieces, signifying six million Jews that perished during the Holocaust... .(it) is an installation composed of scissors and matches.  Scissors signify humiliation by cutting of hair, and matches signify burning of homes and burning of humans.”

She says a visit to Auschwitz years ago changed her as a person. After that moment she’s been driven to use her talents to address social issues.

“We live in the 21st century where information is at our finger tips,” Zajkowski says, “and world events can be seen in our living rooms. We have the technology to influence what is happening across the globe. Each one of us can do something. Helen Keller said, ‘I am only one, but I am one. I cannot do everything, but I can do something, I will not refuse to do something that I can do.’”