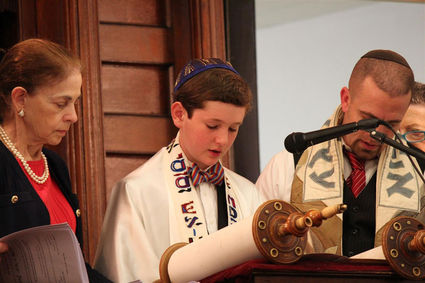 Elijah Schulman reading from Torah at his bar mitzvah.

The invitation came for the bar mitzvah, and we gladly said yes we would be delighted to attend. My great-nephew, Elijah Schulman, became a bar mitzvah. All bar mitzvahs are special, with families getting together, picking up from where they left off the last time there was a family occasion. What made this bar mitzvah worth writing about?

It was held in Selma, Ala., where there had been only four bar mitzvahs in the last 40 years. No relatives live in Selma, so why Selma? Elijah’s great-great-grandmother and great-great-grandfather were raised in Selma, and attended Temple Mishkan Israel synagogue, where he was to become a bar mitzvah. It wasn’t easy making arrangements from Bethesda, Md., where Elijah’s family lives.

“When my ancestors lived in Selma,” said Elijah, “there was a thriving Jewish community, with a synagogue known as Temple Mishkan Israel. The congregation was founded in 1867, and services were originally held in the home of congregation member Adolph Elkan. In 1892, the congregation purchased the land that became the site of their temple in 1900.

However, as small towns all over the South began to lose their Jewish population, Temple Mishkan Israel lost Jewish members as well. Two members of the congregation died this past year, leaving the congregation now with only nine members—not even a minion! The members are all in their 60s and up. “As a result of this population decline, there has been less money for upkeep of the temple, and it is in great need of renovations,” commented Elijah, who raised $6,500 for renovations on Temple Mishkan Israel as his bar mitzvah project.

“When my ancestors came to the United States,” said Elijah on his website, “instead of staying in New York like most Jews, they went to the South, specifically to Alabama. Out of the nine siblings in the Erdreich family (my great-great-grandmother’s family), seven of them settled in and around Selma. At the time, Selma had a thriving Jewish population, most of whom were members of the Mishkan Israel congregation.”

There were two rabbis at the bar mitzvah, travelling rabbis from the Institute of Southern Jewish Life. These two men had worked with Elijah during his bar mitzvah preparations.

The synagogue itself is a beautiful building that can still be visited today. It is a romanesque brick building on the outside. When I went into the synagogue, I was amazed at its beauty. All around the wall were stained-glass windows, which the president of the synagogue, Ronnie Leet, called traditionally beautiful windows. Two of the windows had been designed especially for Temple Mishkan Israel. Above these windows, were two very large marble Jewish stars, filled in and surrounded by stained glass. On that floor is an organ, with the beautiful silver pipes showing on the wall. Looking up still higher one can see more stained glass windows. 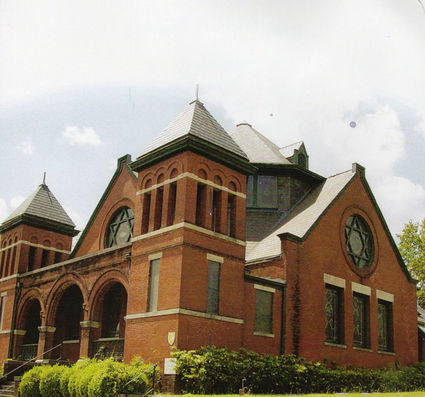 One more thing about this bar mitvah must be mentioned. Because it was an unusual event, the whole town was interested in participating. About 25 came Friday night, and about 40 town folks (complete strangers to the bar mitzvah family) attended the Saturday morning service—including the black mayor of Selma. He presented a proclamation and the Keys to the City to Elijah. It was after all, “a big deal.”

I’ll admit that when we first received the invitation, I wanted the bar mitzvah to be held in Bethesda, you know, near Washington, D.C. and all the sights! But in the end, it was better this way—more time to enjoy family; more time to dwell on the real meaning of family simchas.