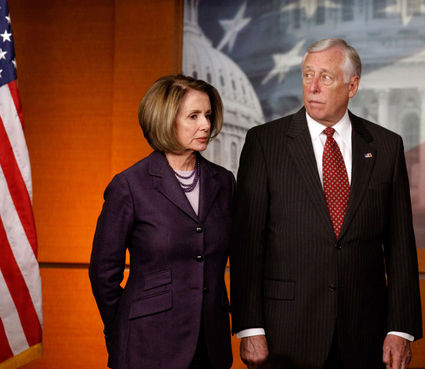 Reps. Nancy Pelosi and Steny Hoyer, seen in a January 2011 photo, are among top-ranking House Democrats inclined to engage Iran’s new president in talks on his country’s nuclear program.

But in ways both subtle and direct, some of those friends—among them some of Israel’s closest allies in Washington—are saying that maybe Hassan Rohani is worth hearing out.

That was the message delivered last week by Rep. Steny Hoyer (D-Md.), the second-ranking Democrat in the U.S. House of Representatives, while leading a tour of Israel for 36 fellow House Democrats.

“We have a new [Iranian] president,” Hoyer told JTA from Israel, where the stalwart supporter of the Jewish state was on his 13th tour as a congressman. “It makes sense for the [Obama] administration to test the sincerity, willingness and ability of the new president to accomplish the objective of assuring the West and Israel and the U.N. what the Iranians are not doing, and will reverse what they already have done, toward a nuclear capability.”

The divergence represents a rare public gap on a crucial security issue between pro-Israel lawmakers and Netanyahu, who in a succession of meetings this month with congressional delegations to Israel has lobbied hard to persuade American leaders to ignore Rohani’s overtures.

“I know that some place their hopes on Iran’s new president,” Netanyahu told a delegation led by Rep. Jim Sensenbrenner (R-Wis.). “He knows how to exploit this, and yesterday he called for more talks.

“Of course he wants more talks. He wants to talk and talk and talk. And while everybody is busy talking to him, he’ll be busy enriching uranium. The centrifuges will keep on spinning.”

In his first news conference as president, Rohani said Iran wants to improve its relations with the United States and intimated he was prepared to increase transparency of his country’s nuclear program, which he insists is peaceful but which Western intelligence agencies believe is aimed at producing weapons.

Iran “will defend its people’s rights and at the same time will remove the concerns of the other party,” Rohani said. “If we feel that the Americans are truly serious about resolving problems, Iran is serious in its will to resolve problems and dismiss worries.”

Netanyahu dismisses such talk as a sham, but the Democratic leadership in the House doesn’t appear to agree.

An official in the office of Rep. Nancy Pelosi (D-Calif.), the minority leader, said her thinking on Iran was consistent with Hoyer’s, pointing to a floor speech July 31 when she joined the overwhelming majority of the House in voting to stiffen sanctions against Iran.

Though she backed new sanctions against the Islamic Republic, Pelosi also welcomed Rohani’s openness to talks aimed at ending the nuclear standoff.

Like Pelosi, Hoyer backs both increased economic pressure and an openness to talks—a position he said is not inconsistent with Netanyahu’s tough line. Nor is a letter signed by 131 House members urging President Obama to test Rohani’s offer, Hoyer said.

“The letter and the actions of the House of Representatives are consistent with what the prime minister has said,” said Hoyer, who did not sign the letter. “Words are cheap, talk is cheap and let’s see what the walk is.”

For Netanyahu and some in the pro-Israel community like Rep. Eliot Engel (D-N .Y.), the clock has run out on that approach.

In July, Netanyahu told the news program “Face the Nation” that Iran was “within a few weeks” of crossing the red line—a boundary the prime minister defined as possessing 250 kilograms of 20 percent enriched uranium—and vowed it would not be permitted to do so.

“If this were three years ago, I would have said, we have a couple of months to lose, OK,” said Engel, the senior Democrat on the House Foreign Affairs Committee. “Now, while Iran is playing out the clock spinning centrifuges, pretending Rohani is a moderate and stepping back, thinking we might be pleasantly surprised—we would not be pleasantly surprised. We would be three months closer to Iran having a nuclear weapon.”

Rep. Eric Cantor (R-Va.) in his July 31 floor speech backing the intensified sanctions also suggested there was no point in waiting out Rohani.

“Considering that Iran continues to flagrantly violate numerous U.N. Security Council resolutions that call for the suspension of its nuclear enrichment program while denying inspectors access to suspected nuclear sites, it is clear that Iran has negotiated again and again in bad faith,” he said.

“America’s policies must be based on facts and not some hope about a new government in Iran that will somehow change the nature of the clerical regime in Tehran. We must respond to Iran’s policies and behavior, not to its rhetoric.”

Nevertheless, the letter urging Obama to test Rohani appears to have had an impact. Its signatories include 18 Republicans, most of them from the party’s mainstream.

A separate and tougher letter to Obama backed by the American Israel Public Affairs Committee and initiated by Sen. Robert Menendez (D-N.J.), the chairman of the Senate Foreign Relations Committee, garnered 76 signers. The Menendez letter, sent Aug. 2, emphasized intensified sanctions and urged that Iran be threatened with military engagement.

But in a sign of how the “test Rohani” message is gaining traction, the AIPAC-backed letter notes Rohani’s offer to engage and counsels “a sincere demonstration of openness to negotiations.”

Obama appears to have embraced the message, although in carefully restrained tones. After Rohani’s inauguration, the White House issued a statement praising Iranian voters, not Rohani. It was issued by the White House, not by Obama.

“The inauguration of President Rohani presents an opportunity for Iran to act quickly to resolve the international community’s deep concerns over Iran’s nuclear program,” the statement said. “Should this new government choose to engage substantively and seriously to meet its international obligations and find a peaceful solution to this issue, it will find a willing partner in the United States.”