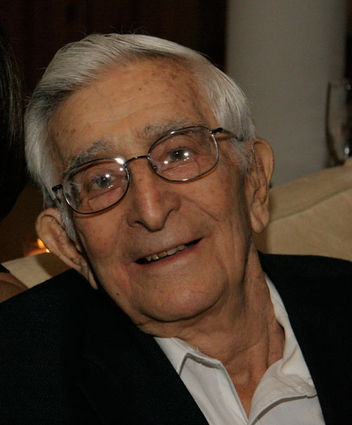 Known as the “Father of the Center” among those who gave birth to the Roth Jewish Community Center, Abe O. Wise, in whose living room the JCC and Hebrew Day School began their formative years, passed away Sept. 26, 2013. He was 90 years old.

The opening sentences of the written history of the JCC states: “The Jewish Community Center of Central Florida was born of a dream realized in 1973 through the efforts of Abe Wise and a group of dedicated community leaders.”

“Abe used to laugh when I referred to him as ‘the Father of the JCC movement’ here in Orlando—but I wasn’t joking...without Abe (and his equally devoted wife Tess) I doubt that the J would ever have been built. He will certainly be missed...but never forgotten,” said Marvin Friedman, former executive director of the JCC.

Not only is his name associated with these two agencies, he was instrumental in the creation of the Holocaust Memorial Resource and Education Center, Kinneret apartments, C.A.P. Management Committee, T.O.P. Endowment Board, and Temple Israel.

“It was with great sadness that Faye and I received the news of Abe’s passing,” said Paul Jeser, who was the executive director of the JCC from 1977-1979 and the Jewish Federation of Greater Orlando from 1977-1984. “In a quiet way, he was a larger than life figure during our years in Orlando,” Jeser continued. “As one of the prime movers behind the formation of the JCC and a serious and influential leader of the Jewish Federation, Abe left his mark. Today’s Orlando Jewish Community is built on the foundation that he, his wonderful wife Tess, and others developed in the mid to late 1970s. The community has lost one of its founders, a serious Jew, and a wonderful mensch.”

Abe and his twin brother, Zelig (who predeceased him), were born in Chattanooga, Tenn., on Oct. 24, 1922, to Oscar and Fannie Wise. Abe Wise came to Orlando with his parents in 1946, after serving in the army in World War II, and started a real estate and construction company. Zelig joined him shortly after, and they formed Wise Brothers Inc. Together they built housing for the military, then branched out into creating neighborhoods, investing in land, and building industrial warehouses. Wise was also a president of the Homebuilders Association and served on the Orlando Planning and Zoning Commission, as well.

Wise wasn’t just a planner, he was hands-on involved in the acquisition of the land for Kinneret, Temple Israel, and the JCC, and then raising money for the projects. In 1984, when the JCC was bursting at the seams, Wise served on the Community Alliance Project (C.A.P.), which raised $700,000 to construct the JCC and Federation administrative offices.

When Abe was chosen to receive the Heritage Human Service Award in 1997, his nephew Julian Meitin told the Heritage, “Over the years, no one has been more attentive to the needs of this community from the formation of the JCC to Temple Israel where he was one of the early presidents and a charter member.”

A humble man, Wise went about the business of building the Jewish community into what it is today. He was chairman of the Temple Israel Building Committee, Israeli Bonds First Orlando Event, Jewish Community Council JCC Committee, and Holocaust Memorial Resource and Education Center. He served on the Jewish Community Council Board of Directors, JFGO Board of Directors, and UCF Judaica Studies Steering Committee. He was a founder and fourth president of Temple Israel, first president of the JCC, and second president of T.O.P. Trustee. The awards he received included the Heritage Human Service Award and the Jerome J. Bornstein Senior Leadership Award.

“Abe was an outstanding leader and someone that I admired greatly,” said Friedman. “He worked tirelessly & contributed so much, for the benefit of our entire Jewish community. Every community should be fortunate enough to have an Abe Wise.”

Wise is survived by his wife of 63 years, Tess; his son Steven (Leora); his daughter Ellen (Mark) Lang; six grandchildren; and two great-grandchildren.