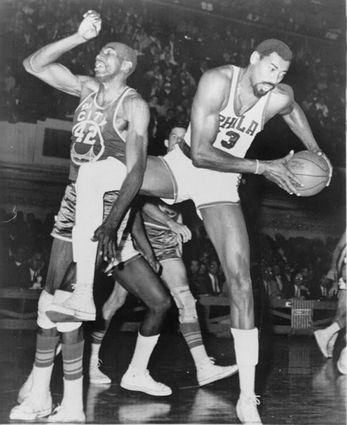 Library of Congress Wilt Chamberlain, playing for the Philadelphia 76ers, faces Nate Thurmond of the San Francisco Warriors in 1966.

With the 2013-14 National Basketball Association season set to begin Oct. 29, this month also marks the 14th anniversary of the death of Wilt Chamberlain, one of the greatest players ever. Beyond his eye-popping statistics, a closer look at the 7-foot-1 center’s life reveals the giant influence of Jewish role models.

Robert Cherry, who played basketball at Chamberlain’s alma mater, Philadelphia’s Overbrook High School, explains that “lots of Jewish kids” went to the school. After Chamberlain attended the University of Kansas and played for the Harlem Globetrotters exhibition team, basketball pioneer Eddie Gottlieb would convince him to join the NBA’s Philadelphia Warriors. Gottlieb also got him a summer job at Kutsher’s, the well-known Borscht Belt resort, where Chamberlain bonded with owner Milton Kutsher. Ike Richman signed Chamberlain to his first contract with the Warriors, Stan Lorber was his personal physician, and Sy Goldberg was his lawyer and the executor of his estate.

What is the common thread among Chamberlain’s mentors?

“Besides them being Jewish, they were people first, Jewish men second, and the traits that made them successful were traits lots of successful people have,” Cherry, author of “Wilt: Larger Than Life,” told JNS.org. “Wilt responded to that. They gave him direction and he admired their discipline, values, ethics, their performance and sense of humor.”

Chamberlain, who died in October 1999, is the only player to score 100 points in an NBA game, and to average more than 50 points (or even 40) per game in a season. He averaged better than 30 points and 20 rebounds per game over the course of his career, while no other player ever produced those averages during a single season. He won scoring titles in seven seasons, and 11 rebounding titles. He once even led the league in assists.

But while the salient image of Chamberlain is his domination of NBA courts, he also left his mark on the Borscht Belt—the chain of resorts in upstate New York’s Catskill Mountains that were a popular vacation spot for New York City Jews, peaking from the 1920s until the 1970s.

“Summertime also meant getting away from the hot city and venturing to Kutsher’s Country Club in the Catskill Mountains, where the air was clear and refreshing, and the creamed herring alone was worth the trip,” Cherry writes in his book. “It was also at this resort that, in the summer of 1954, [Eddie] Gottlieb, with the help of Haskell Cohen, then the NBA publicity director, had landed Wilt, a budding scholastic star, a job as a bellhop.”

Milton Kutsher, owner of the resort with his wife Helen, made a lasting impression on him. Subsequently, the Kutshers kept up a lifelong friendship with Chamberlain.

“We thought of Wilt as an extended member of our family,” Helen Kutsher tells Cherry in the book. “I used to kid him, ‘You’re like my fourth child. He always stayed in touch, and we’d talk during the year. He never really left us.”

Before Eddie Gottlieb—who got Chamberlain that summer job at Kutsher’s—owned the Philadelphia Warriors, he founded the pre-NBA Philadelphia SPHAS, a team whose jerseys featured the Hebrew letters (samach, pey, hey, aleph) from which its name was derived. The SPHAS won seven American League championships from 1934 to 1945, and the modern NBA was founded in 1946. Rich Westcott, author of “The Mogul: Eddie Gottlieb: Philadelphia Sports Legend and Pro Basketball Pioneer,” says Gottlieb played a key role in Chamberlain’s rise to NBA stardom.

“Ironically, Gotty (Gottlieb’s nickname) could look out the windows of his house on Salford Street, and in the distance he could see Overbrook High School a few miles away,” Westcott told JNS.org. “How’s that for a start in the relationship between the two? Over the years, Gottlieb went to watch Wilt play as a schoolboy. He earned Wilt’s admiration as one of the driving forces behind the integration of professional basketball.”

Westcott explained that Gottlieb “became the person who devised and championed a new element in the NBA draft, which gave teams the territorial rights to high school players from their areas.” That element would eventually land Chamberlain with the Philadelphia Warriors.

“Instead of having to wait for a player to complete college, the short-lived rule allowed players such as Wilt to be drafted by their local team. Hence, when the time came, Wilt became a Warrior, and that in itself played a major role in Wilt’s long path to the Hall of Fame,” Westcott said.

According to Westcott, Gottlieb had talked Chamberlain out of playing another year with the Harlem Globetrotters, an exhibition team Chamberlain played with during the 1958-59 season after he left the University of Kansas early and was not yet eligible for the NBA. Gottlieb offered Chamberlain a salary he couldn’t refuse—$30,000, the highest in the NBA at the time.

Chamberlain’s signing with the Warriors cemented his bond with Gottlieb. They remained close friends even after Gottlieb sold the Warriors. Years later, when Chamberlain was playing for the Los Angeles Lakers, he gave Gottlieb the ball with which he had scored his 20,000th career point, according to Cherry’s book.

“All of these situations over the years, and the fact that Gotty played a major role in the development of Wilt’s career, explains why they had such a close relationship,” Westcott told JNS.org. “Gotty was in many ways Wilt’s mentor and Wilt had a tremendous respect for him and the role he played in his career.”

Another Jewish role model for Chamberlain was Ike Richman, who signed Chamberlain to his first contract with the Warriors as the team’s attorney and was later Chamberlain’s personal lawyer.

After the Warriors moved from Philadelphia to San Francisco, Richman and Irv Kosloff bought the Syracuse Nationals franchise and moved it to Philadelphia, renaming it the 76ers. Cherry says Richman was Chamberlain’s most trusted business adviser, the confidant who helped him with his personal problems, and a father figure. When Richman died in December 1965, Chamberlain—who was traded to the 76ers that year and would play with the team until 1968—said, “I owe that man all I have today.”

By the end of his career with the Philadelphia/San Francisco Warriors, the Philadelphia 76ers, and the Los Angeles Lakers, Chamberlain amassed numerous NBA records in scoring, rebounding, and durability. He won two NBA championships, earned four Most Valuable Player awards, and was selected to 13 All-Star Games.

Yet a series of emails Cherry says he recently received, all pointing to a particular video of Chamberlain that surfaced on the Internet, indicate that fans also remember the basketball legend’s bellhop career. 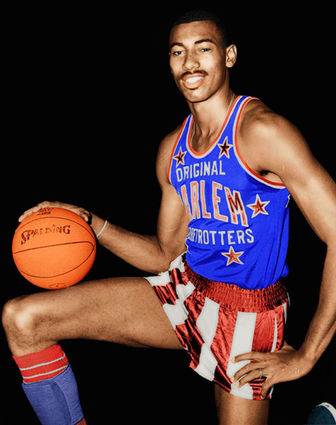 “Ten people sent it to me,” Cherry said of the video. “It’s Wilt working as a bellhop at Kutsher’s. He’s handing suitcases to another bellhop on the second floor.”