Examination of good and evil in the Holocaust 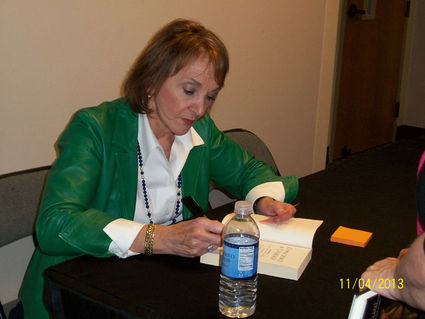 Dr. Eva Fogelman, author of "Conscience and Courage: Rescuers of Jews During the Holocaust."

As part of Central Florida's Commemoration of the 75th anniversary of Kristallnacht, Orlando's Adventist University of Health Sciences' presented its University Colloquium series with an inspiring and educational program about two different but related aspects of the Holocaust. The theme was "Moral Courage." The two speakers were Eva Fogelman, PhD, a licensed psychologist and author of the Pulitzer Prize-nominated book "Conscience and Courage: Rescuers of Jews During the Holocaust," who spoke about the courageous people-24,000 recorded Righteous Among the Nations-who risked their lives to save countless thousands of lives, including her father, in Europe during World War II; and Rabbi Baruch Goldstein, a 90-year-old rabbi from Massachusetts and Holocaust survivor, who shared his experiences during the Holocaust and discussed where this evil that encompassed so many came from.

In her studies and interviews with more than 300 rescuers, Dr. Fogelman learned these people all had three things in common: They were aware of what was going on around them; they could interpret a situation where help was need; and they assumed responsibility for another's life.

What motivated them? Many knew it was the right thing to do, whether out of compassion or religious conviction. Some already had a relationship with Jewish people in their communities. Others wanted the truth to come out and they risked their lives informing people about the ultimate goal of the Third Reich.

Ninety percent of the rescuers interviewed told Fogelman they learned people are one people under God. They saw themselves simply as people helping people.

Fogelman also saw a correlation between the rescuers upbringings and their desire to help their fellow human beings. Most were independent, confident, had emotional stability and a strong moral foundation. As children, they were raised in a loving, compassionate atmosphere and shown by parental role models to serve others.

"I just did what I had to do at the time," was the answer most rescuers gave.

Fogelman posed a call to action. She encouraged the audience to remember the courageous rescuers. "We all know the name Hitler and what it stands for," she said. If we remember even one rescuer's name and learn his or her story, we encourage the good in mankind. She shared one particular name. "We need to know Johan Weidner and what his names stands for-then tell others of his selfless work."

Johan Hendrik Weidner was born in 1912 to a Dutch and Christian family. During his childhood, his parents always made him and his sisters read the Bible. Growing up, he was raised to love and respect Jews. Since the basis of the Ten Commandments was to love God and your neighbor, Weidner thought that he should help Jewish people in their predicament against the Nazis.

In 1941, Weidner founded an underground network which came to be known as Dutch-Paris. It was headquartered in his Lyonnaise textile business and became one of the largest and most successful underground networks to help people persecuted for faith or race escape via Switzerland and Spain. This escape route was also used for smuggling documents. In Holland this message line was also known as the "The Swiss Way."

Approximately 300 people were part of this underground network, and the risks were great: about 150 people were arrested, and 40 died in camps, including his sister who helped to coordinate escapes from Paris. The escape route is responsible for the rescue of more than 1,080 people, including 800 Dutch Jews and more than 112 downed Allied pilots. Weidner was one of the most sought after underground leaders of France, for which the Gestapo offered a reward for his arrest.

At the 1993 opening of the United States Holocaust Memorial Museum in Washington, D.C. Weidner was one of seven persons chosen to light candles recognizing the rescuers. The government of Israel honored him as Righteous Among the Nations at Israel's national Holocaust Memorial, Yad Vashem where a grove of trees was planted in his name on the Hill of Remembrance along the Avenue of the Righteous.

"I never wanted to believe all Germans were Nazis, all Poles anti-Semites," said the spry little rabbi as he shared his story of unimaginable tragedy. The Nazis invaded Rabbi Goldstein's country, Poland, when he was 16 years old. As the evil kept unfolding, his family continued to hold on to hope. "We hoped the war would end and we'd be a family again," he said. As his family learned to accept German authority, they remained hopeful. "This will pass. Wars begin, wars end. The ever hopeful Jews said 'we will survive.'"

But that didn't happen. Goldstein watched his father and sister being led away, never to see them again. His two grandmothers died in his presence. His mother choked and gasped for air in the gas chamber, and finally, he and his brother were separated. One went one way, the other "went through the chimney."  Only his grandmothers had a proper burial.

"Where did this evil come from?" he queried. "Does anyone remember the Armenians?" he asked. Only a few in the audience said yes. In 1915 one and a half million men, women and children were killed. No one talked about it. They were forgotten. Hitler knew this and believed he could do it again because no one remembered these Armenians. This lack of remembrance fed his hatred.

The seeds of evil grow in man's heart in the form of racism and hate, he said. "Racism is stupid!" Goldstein proclaimed loudly. "Racism doesn't make sense." He reminded the audience that while people are capable of tremendous good-as Dr. Fogelman had expressed-people are also capable of horrible cruelty. "It is infantile to hate a person because he looks different from you or to believe a person who belongs to a certain group is somehow inferior!"

For several years after the war, Goldstein denied traditional beliefs. Rediscovering his relationship to his faith led Goldstein to pen his memoir in 2008, "For Decades I Was Silent: A Holocaust Survivor's Journey Back to Faith."  He came to the realization in his life that there are three important principles of Judaism: Freedom of choice-God didn't do this, people did; Prayer –God listens to prayer; and God hides His face to give us choices. And now, he says, "If it weren't for Judaism, I'd be a lost soul."

During the Holocaust, men, women and children were given choices. These choices affected the lives of many-some for good, some for evil. 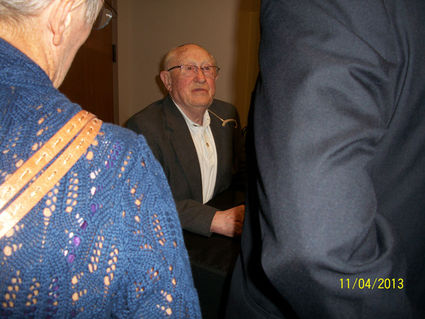 Rabbi Baruch Goldstein, Holocaust survivor and author of "For Decades I Was Silent: A Holocaust Survivor's Journey Back to Faith."

"People have more in common than they have to divide them," he said in conclusion. "There is only one race-the human race. No one in it should be treated without respect."