The anatomy of a wish from New Hope for Kids 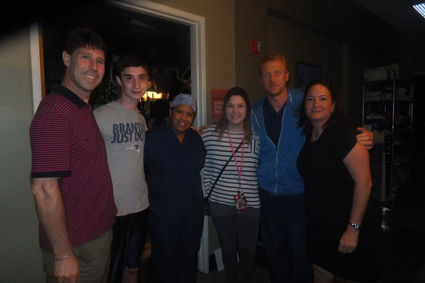 Three years ago my 15-year-old daughter, Jennifer (Jenny), was granted a wish by New Hope for Kids Wishes for Kids Program in Maitland. Jenny chose to visit a medical center in the Los Angeles area. Although she had grown hospital weary following a protracted illness, which included travel to Johns Hopkins, The Mayo Clinic and Northwestern University Hospital, there was one premier medical center that was still on Jenny's wish list. She wished to visit Grey Sloan Memorial Hospital (formerly known as Seattle Grace Hospital, and Seattle Grace Mercy West) on the set of ABC's "Grey's Anatomy." Thanks to New Hope for Kids, Jenny went to Hollywood, and had her best hospital visit ever.

Jenny became a fan of "Grey's Anatomy" in the fall of 2009, when she contracted mononucleosis. (Later, the virus would wreak havoc on her nervous system as it joined forces with a secondary infection.) The previous April, Jenny had been an active teen, climbing Masada and kayaking along the Jordan River on her eighth-grade trip to Israel with the Jewish Academy of Orlando. Just four months later, bereft of energy, Jenny spent hours watching her favorite TV shows to combat the boredom and exhaustion brought on by illness. Time spent with "Grey's Anatomy" (and its more than 140 episodes) was just what the doctor ordered. Jenny passed many healing hours with doctors like neurologist Dr. Derek Sheperd (aka "McDreamy" played by Patrick Dempsey), who made a difference, and was nice to look at, too! Although Jenny's visits to hospitals around the country brought mixed reviews, time spent at Seattle Grace Hospital always brought a positive outcome.

In the fall of 2010, hope entered Jenny's life through the organization, appropriately named "New Hope for Kids," along with their "Wishes for Kids" program. Jenny wished to tour the set of her favorite television show, "Grey's Anatomy." New Hope Executive Director Rosie Wilder, Jenny's modern-day fairy godmother, promised to do her best to make it happen but shared, "Hollywood wishes are the most difficult to achieve." Wilder added, "They can take a long time to schedule (due to hiatus and complicated shooting schedules), and then you may need to leave town at a moment's notice." Wilder was right; more than two years passed, and Jenny's wish still had not come to pass. There were several talks about changing the wish, but Jenny held firm saying, "when I have a hard day, I know that my trip to 'Grey's Anatomy' is waiting for me."

On Saturday Sept. 28, Jenny received the long awaited email. Wilder messaged "Jenny and family-wonder of wonders-the WISH for 'Grey's Anatomy' has finally come through. As expected, the turn around time is very short. Can you all fly out on Thursday, Oct. 3 and return on Thursday, Oct.10? That is the big question... Rosie."

It seems a lifetime had passed since the wish was approved in January 2011. Jenny was no longer a high-school student, but a freshman at UCF in the Leads Scholar program. I had returned to teaching after a three-year hiatus. Jenny's brother, Andy, was just beginning a week of high school midterms and Jenny's dad, Tony, was in New York on business. And yes, we would drop everything and go. Families stick together during good times and bad. With any luck (kayna-hora pooh pooh) Jenny had been through the worst, and we were looking forward to sharing the best.

Five days after the email we boarded the plane to LA. And our trip proved to be even better than Jenny had wished. New Hope volunteer, Michele Chamberland, made sure we had deluxe accommodations at a Marriott hotel in Marina Del Ray. Chamberland shared that she posted a donation request for hotel points on Facebook, and within hours she had a donation that covered all our hotel expenses. She also wrestled with complicated airline reservations, allowing Andy and Tony to depart on an earlier flight to accommodate Andy's exam schedule.

Finally the "wish day" arrived. We have visited many hospitals in the past few years, but today was the first time we were excited about checking in. While touring LA, Jenny was not feeling well. We had been running around nonstop, and she was feeling fatigued. Jenny joked, "I really need to see Dr. Silverman (Dr. Maxine Silverman), but I think Dr. Sheperd will do!"

We arrived at Prospect Studios, where the show is filmed, and were met by co-producer Karin Gleason and ABC community specialist Alicia Katz. Jenny was given the VIP treatment, and we are grateful to Gleason and Katz for their graciousness. We made a brief stop at another health center along the way, ABC's iconic soap, "General Hospital," also filmed on the Prospect lot. After a few quick photos, we made our way onto the "Grey's" set. Jenny and I held back squeals of delight as we entered the original home of character Meredith Grey (played by Ellen Pompeo), now belonging to Dr. Alex Karev (Justin Chambers). We took a family photo on the iconic bench outside the house, where many dramatic moments unfolded over the last 10 seasons.

Finally, we visited a set where scenes were being shot. We walked into a reception area at Grey Sloan Memorial Hospital and were greeted by two familiar faces from our television screen-actors Kevin McKidd (Dr. Owen Hunt) and Chandra Wilson (Dr. Miranda Bailey). Jenny was greeted with a warm handshake and outstretched arms. Our brief conversation is a bit of a blur. Everything seemed a bit unreal (after all, we were chatting with make-believe doctors in a make-believe hospital!). What was genuine was the offer to take pictures together and the warm welcome. McKidd put his arm around me (I felt like I was in high school and may never wash my shirt again).

Jenny shared how much the show had meant to her when she first became ill. How the zillions of DVDs had kept her company, and given her faith in the medical establishment, even when our faith in real life was wavering.

McKidd directed the episode being filmed (episode #8). We observed a scene being shot three times for about 40 seconds each. Jenny sat in the director's chair and listened to the dialogue.

It was an amazing day! In the evening McKidd tweeted Jenny, "Awesome to meet you!" Our family couldn't agree more.

On the plane home Jenny said, "A wish is much more than a special day in the life of a sick or recovering child or teen. The fulfillment of a wish shows that anything is possible. It took me more than two years to regain my ability to walk. In the back of my mind I knew that something incredible and extraordinary was waiting for me, and it gave me that extra push. My parents were by my side and did everything they could to help me heal, but New Hope for Kids gave me something to hang on to."

We are extremely thankful to New Hope for Kids, Wishes for Kids program. Also, thank you to her Cornerstone fund raising team, the 4 Hopeful Knights. To find out more, volunteer or make a donation, contact newhopeforkids.org.