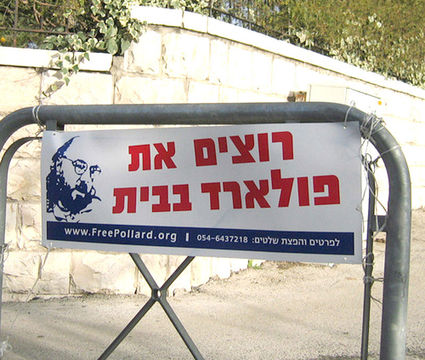 A Hebrew sign in Israel calling for Jonathan Pollard's freedom.

(JNS.org) Last Thursday, Israeli spy Jonathan Pollard entered his 29th year in American prison. Pollard, now 59, was arrested in Washington on Nov. 21, 1985. He was later convicted of spying for Israel, and is the only person in U.S. history to receive a life sentence for spying for an American ally.

Lerner, who visits Pollard in prison approximately every two months, said, "The clemency petition has been sitting on President [Barack] Obama's desk for 4-5 years already. It's his move."

On Nov. 20, Pollard's wife Esther appealed to Obama to free her husband out of humanitarian considerations, Israel Hayom reported. Ahead of Obama's visit to Israel in March, more than 200,000 Israelis signed a petition to the American leader calling for Pollard's release.

Jewish Agency Chairman Natan Sharansky said last Wednesday, "It is our collective failure that Pollard is still in prison. It is unprecedented in the history of the U.S. that someone who spied for a friendly country served even half the time [that Pollard has] in prison."

An embarrassment for America! What rubbish! Israel recruits an American citizen to sell out his country who is then sentenced by a federal court to life for espionage. And it's AMERICA which should be embarrassed? Anyone can say anything in America. It may be Obama's move, but as concluded by several presidents before him, the correct move appears to be no move.