Meet the eight active octogenarians to be honored by KCOA 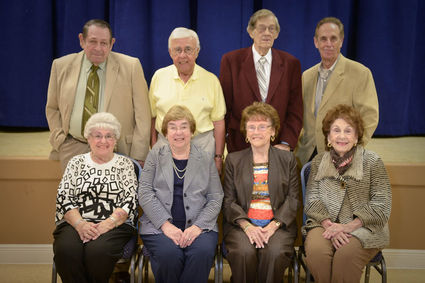 Plans are well underway for The Kinneret Council on Aging's (KCOA) fourth annual 8 over 80 Honorary Dinner that will be held on Sunday, Feb. 23, 2014. The event recognizes individuals over the age of 80 who continue to contribute to the Jewish community through their volunteer and philanthropy efforts. This year's honorees are a dedicated and dynamic group of individuals.

Nominated by Madeline Wolly, Ruth Goldhar is still a vibrant active 90-year-old woman. She moved to Central Florida in 1956 with her husband to operate a family fish market and Chinese food restaurant. In 1964 Goldhar began a very successful career with the State of Florida's vocational rehabilitative programs, including the Brain and Spinal Cord Injury program of which Florida was one of only four to have. She retired in 1996, after 32 years, and continued to be involved in her community. Today, she lives in Village on the Green and is involved with their marketing committee; environmental committee and is a member of the Florida Life-Care Residents Association which is a statewide organization that is considered the voice of residents living in continued-care retirement communities (CCRC) and lobbies the state and federal government on issues important to CCRC residents.

Barbara Weinreich, 82, was raised in Queens, N.Y. She received her bachelor's degree in English and a master's of education from Cornell University. She married and raised her family in Great Neck, N.Y., where as a stay-at-home mom she became a Hadassah president; Girl Scout chairman, and was involved in her children's many school and sporting activities. She has lived in Orlando for the past 53 years. In 1975 she began a 25-year career as a fourth- and fifth-grade teacher at Eastbrook Elementary in Seminole County. Upon her retirement in 2000, she began her involvement with the Jewish Federation of Greater Orlando. Barbara currently chairs the Jewish Community Relations Council and serves as the representative from the Holocaust Center on the Federation board. She currently serves on the board of directors for the Holocaust Center and is a member of the Advisory Committee for the Judaic Studies Department at UCF. In addition to volunteering at Temple Israel, Weinreich enjoys reading and playing mahjong. Barbara was nominated by Larry Gutter and Debbie Meitin.

Helen Tishman, 93, was nominated by Nancy Ludin. She lives at Chambrel in Longwood where she serves as president of the Residents Council and is an active Jewish Pavilion volunteer and member of the JCC 39'ers. Tishman was born in 1920 in Brooklyn, N.Y. She married Leon Tishman in 1943 and raised five children. The family moved to Miami in 1949 when her oldest daughter was three years old. Tishman was involved with her children's activities as well as her community. She took an active role in promoting ethnic tolerance, working with the Anti-Defamation League, the American Jewish Committee and the Round Table of Christians and Jews running a program, "Similarities of Religion," at a time where anti-Semitism and the presence of the KKK was prevalent in the South Florida area. Her husband died when she was 48 and still had three children at home. To support her family, she went back to school to become a social worker and graduated from Barry College. She had a successful career working with Family Court and then under Janet Reno, the Dade County district attorney. She retired and moved to Ft. Lauderdale and continued to be involved in her community as president of her new homeowner's association and as a COPS volunteer. She moved to Orlando in 2004 to be by her children.

Sons Steve and Kurt Kotzin nominated their father, Gordon Kotzin, 85. He was born in Rochester, N.Y. Kotzin operated a successful automotive business with his brother-in-law before retiring and moving to Florida in 1992. Kotzin, with his late wife Min, immediately began their relationship with Southwest Orlando Jewish Congregation (SOJC). His love of landscaping has him at SOJC taking care of the shrubs and grounds. Each year before the High Holidays he undertakes the task of detailing all of the beds, spreading mulch and planting fresh flowers. He volunteers on the Ritual committee; serves as an usher and helps with the pre-school. He is extremely generous to his family, friends, and even strangers- often working in the background in his quiet, unassuming way. He is an accomplished musician and still performs with a local Klezmer band. Kotzin works several days a week collecting parking tolls at the Orange County Convention Center.

Don Kaplan, 83, nominated by Irwin Feldman, was born in Brooklyn, N.Y. He started working at a young age and left his home at age 17 to live with his uncle in Pennsylvania. He met his future wife Marilyn-who was 16-at a July 4th picnic. Kaplan enlisted in the Air Force and began a 20-year career as a flight engineer and studied at the University of Illinois. He had a fascination with airplanes from an early age, and flew his first propeller airplane at age 12. Don and Marilyn married in 1951 and had two sons. They moved the family to Sky Lake in Orlando in 1966 when Kaplan retired from the military. He and Marilyn then began a very successful second career as the first Amway direct distributor in Orlando. He has been an active volunteer since his military days. When he was stationed in Massachusetts for nine years, he became a leader in the Boy Scouts of American; was PTA president; coached and managed Little League and began a fundraising campaign for a local orphanage. When he retired the second time from Amway in 1974, he began his full-time job of volunteering in the Central Florida community. He has been involved with Congregation Ohev Shalom serving on many committees and vice president of their Senior Group for 20 years. He worked at Kinneret, purchasing food for the resident grocery co-op; cooking at an annual July 4th barbeque and even driving the bus if needed. Kaplan has been a passionate volunteer at the Central Florida Zoo for more than 20 years. He still does weekly education programs for school age children and can be found exercising the large animals.

Nominated by her granddaughter, Mollie Savage, Rose Savage, 92, was born in Salem, N.C. She attended Salem College and married her husband Alvin in 1942. Alvin became a dentist, and after served in the Coast Guard, they joined Rose's family in Orlando and raised three children. Savage has been an active member of Temple Israel for more than 49 years, including serving as a president of their Sisterhood. She has been a lifetime supporter of many charitable and cultural organizations and continues to support Jewish Family Services, Jewish Pavilion, and Hadassah. She is most proud of her efforts with her late husband, who together founded a program to bring dental care to indigent people. Savage is very active with her family that now includes grandchildren and great-grandchildren; plays mahjong weekly, and still knits blankets.

Dick Appelbaum nominated his friend, Robert Petree. Now 80 years old, Petree was born in Winston-Salem, N.C. He graduated from American University in Washington, D.C., and then graduated from Duke University College of Law. He became active in the Democratic Party at a young age, working on the campaigns of Hubert Humphrey and Lyndon Johnson and later founding an organization designed to involve teenagers in state, local and national politics. In 1960 he moved to Orlando and soon after began a 40-year friendship and partnership with Jerry Bornstein. The firm of Bornstein and Petree, was recognized for arguing most of the cases pushing for school integration, civil rights, freedom of speech and the rights of religious minorities in Central Florida in the 1960s and early '70s. He began his long association with the organized Jewish community with his involvement with Jewish Family Services, serving as a board member and pro bono legal counsel. He has also served on the board of the Jewish Federation of Greater Orlando and is an ardent supporter of Israel. He has been recognized by many community organizations for his passion and commitment, receiving the JFS George Wolley Leadership Award; the Federation's Jerome J. Bornstein Leadership Award, and the Heritage Human Service Award. He has been married to Grace for 40 years and lives on a quiet island in Lake Mary. His loves birds, nature, cats and ancient history and surrounds himself with a library of more than 7000 books.

Phyllis Kamenoff gladly nominated Bill Kahn, 81, who was born in New York City in 1932. He moved to Miami in 1949 and graduated from Miami Senior High. He received an electrical engineering degree from the University of Florida. Kahn met his wife, Fran, his senior year and they have now been married 58 years. One of Kahn's first jobs sent him to Yucca Flats, Nev., where he witnessed four atomic bomb blasts. In 1958, he and Fran moved to Orlando where he began his career at Martin Corporation. While at Martin, Kahn won many technical and engineering awards. He invented/developed an automated diagnostic tool for computers that was widely used by computer companies well into the '80s. He also invented/developed the world's first digital large-scale paging and cellular telephone system- a predecessor to modern cell phones. He retired in 1992 and began a new journey that included travel and community service. He performs as a clown for Jewish Pavilion and has served on the board at Temple Israel, the JCC, and the PACE Center for Girls. He currently gives free seminars on how to avoid scams, frauds and cons to groups throughout the Central Florida area, is working on a book about legal scams, and plays doubles tennis three times a week. The Kahns, who have two children and six grandchildren, live in Maitland.

Hors d'oeuvres and cocktails will be served at 5 p.m. in the Jessie Render Social Hall, and at 5:45 p.m., guests will move into the Delaney Dining Room where an elegant sit down dinner will be served. The highlight of the evening will be the introduction of the honorees and a viewing of a specially produced video.

There are several ways for the community to support KCOA and celebrate this year's 8 over 80 honorees. Seating will be limited. In addition, congratulatory ads and messages can be placed in the 8 over 80 Tribute Ad book. Ads must be received by Feb. 10, 2014. For information on tickets or information on the Tribute book, please contact Leslie Collin at 407-425-4537 or by email at lcollin@bellsouth.net, or check the website at http://www.kinneretapartments.com.