The Arab/Israeli conflict from a soldier's perspective 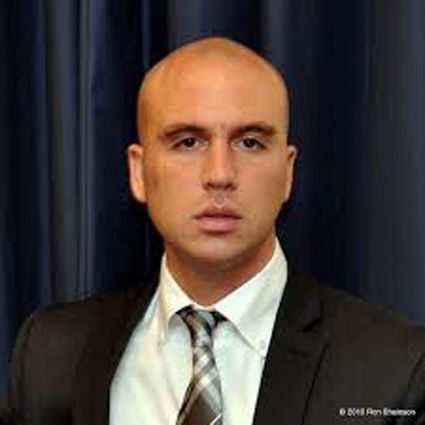 On Nov. 25, the UCF Knights For Israel invited Sgt. Benjamin Anthony (IDF Reserves) of the Our Soldiers Speak organization, to speak on the state of Israel from a combat soldiers perspective.

Anthony spoke to a standing-room-only crowd of more than 125 people, receiving three standing ovations. In the course of his lecture, Anthony humbly transformed himself from a battle-tested, heavy-machine gunner into a statesman. He prefaced his presentation by expressing to the audience he does not view Palestinians or the Muslim people as terrorists and that he strongly suggests that nobody should make such a grotesque comparison.

His story begins during the 34-day 2006 Lebanon War where Hezbollah fired thousands of rockets into the Israeli border towns of Zar'it, Shlomi, and other surrounding villages. Anthony was immediately activated and operational as a heavy-machine gunner in a few short days. Rather than talk of the technical aspects of modern warfare, Anthony transported the audience from their comfortable surroundings into the psychology of what it is like to be an Israeli soldier.

Unlike other countries, Israel is on permanent alert-active duty and reserve soldiers can be recalled to duty at a moment's notice. For the Israeli citizen, being on permanent alert is not unusual it is an integral part of the fabric of daily life for the soldier and civilian alike.

Anthony brought the audience into the lives of the 18-21-year-old soldiers-brothers in arms-as they quietly suit up for battle and prepare for cross border night operations against a very motivated and capable Hezbollah enemy. During the course of this short 2006 war, Israeli soldiers would break the glass of Lebanese homes and scatter the shards of glass around their perimeter so they could hear Hezbollah soldiers approaching as they stepped on the glass.

The media however, reported the Israeli soldiers were destroying private Lebanese homes and murdering civilians for no reason other than the joy of destruction. After the fighting had ceased many of these 18-21-year-old soldiers who survived would find a quiet place and write their last will and testament. It is at this moment Anthony said these boys became men and realized they could die in this time and place-never going home.

"These Israeli soldiers are no older than the UCF students listening to me speak today," he said.

Anthony asked the audience to experience what an Israeli sniper sees from his scope. He said, "Imagine that you are looking through the scope of your rifle and you see a Hezbollah or Hamas terrorist using his crying child as a human shield. You see the magnified face of a crying child with tears streaming down his or her face." He then asked the audience, "Could you take the shot?"

Anthony said, "The visual image you are picturing in your mind's eye and all the emotions you are experiencing at this moment in time is what an IDF soldier must reconcile with in a split second of time."

Anthony said again, this scenario is not hyperbolae but is more common than anyone will ever know. "I have seen it with my own eyes. These are the tactics of Israel's enemies, which are rarely reported in the press."

Anthony said there is no joy in warfare. Rather than stating the obvious, he took the audience through the process of getting the recall to duty text message from his commander, preparation for war, saving or becoming one of the wounded or killed, to coming home.

It is in that coming home Anthony articulated an observation about the simple task of washing his dirty, muddy, and stained uniform that captured the audiences' attention. After his IDF uniform was washed, Anthony put it on the balcony to dry in the Mediterranean sun. He took a moment to look around and saw hundreds of IDF uniforms flapping in the breeze of his apartment building and most all other buildings in his line of sight.

Those hundreds of IDF uniforms drying in the sun represented the lives of most every Israeli citizen and soldier who is touched by war and must fight for Israel's survival. The prior Israeli generations did the same, as will future generations and that is the reality of life in Israel. Anthony stated that the security concerns Israel faces on a daily basis will never be understood by the press because they do not fight face-to-face with the terrorist enemies that surround the tiny State of Israel and will never understand that if Israel does not fight, she will cease to exist.

"Let nobody ever tell you we fight against an enemy that uses slingshots and pebbles against us...they are capable and not to be underestimated. It is wrong, it is criminal, and perverse that these Israeli soldiers are portrayed on many a campus here in the United States as being everything they are not, not as boys but as barbarians, not as defenders but as invaders, not as these frightened sons forced to protect their homes, but as blood-thirsty killers. Does anybody really believe this is a lifestyle we Israelis elect? That we would not take peace if it was in our grasp?

"As disturbed as I am by my memories of war, what is going on in your university campuses causes far greater disruption to my nights. I have spoken on over 300 campuses and I can bear witness to the fact, that on most university campuses no effort is spared when it comes to defaming the State of Israel. Anti-Israel students are not working to delegitimize the State of Israel as they are so often erroneously portrayed. They are working to destroy Israel in the media, marketplace, and particularly in your hallways of academia. I am urging you to take note of that threat because it is happening today, it will happen tomorrow. I am aware the students of today will be the policymakers of tomorrow. However, they are being raised in a campus environment that is hostile to Israel and often hostile to Jews. A pro-Israel student is no less embattled on a college campus in America than a soldier of Israel on the front lines of a combat zone."

Anthony explained some of the allegations that are bound to repeat themselves: Israel is an apartheid state-being disproportionate in its actions inside Gaza; that the soldiers of Israel are to the Palestinians what the Nazis were to the Jews.

"Despite all efforts to counter these falsehoods the mud of these lies is sticking because the people and the press require no evidence whatsoever to indict a soldier of Israel," he said.

Why is this so urgent? Anthony explained that the military hardware he carries in Israel says "Property Of The United States Government."

"It does not say manufactured or imported from the United States," he said. "What you must discern from this is that many of those means, methods, and tools the Jewish state has of defending itself are on loan, and loans can be recalled or discontinued, make no mistake about it."

One of the primary reasons Israel is able to defend herself is the alliance between the United States and Israel. However, that is changing and it is changing on university campuses. "Who will repel this threat if not you?" he asked the students.

"What is it I fight for?" Anthony asked. "I fight for one thing and one thing only, I fight because I have the knowledge and understanding this tiny strip of land called Israel is the homeland of the Jewish people and that's it. It is in Israel that my people and my future are inextricably tied and I happen to believe that if Israel the country does well, you will do well. It is the home of the Jewish people and it needs to be protected, guarded, and watched over proudly, zealously, and unabashedly, never militantly but forever with pride."

Anthony conveyed an analysis regarding Israel's strength and how her enemies react.

The goal of Israel's enemies during the 1948 and 1967 wars was to push Israel into the sea. That dynamic changed in 1973 when the objective of Israel's enemies was they would leave Israel alone if she gave up the Golan Heights and the West Bank. All conflicts since 1973 have been about Israel giving up land for peace rather than the total destruction of Israel.

Israel's adversaries know they cannot easily wipe Israel off the map so they had to change tactics. Anthony said his greatest fear is if Israel loses the will to fight and caves under to the pressures of land for peace. He said Israel will do whatever she needs to do to protect herself. In that strength there will be peace.

It is the world medias false and distorted portrayal of Israel that drives Anthony and the Our Soldiers Speak organization to give lectures at more than 300 universities, synagogues, and churches across the United States.

Ariel Hoffman and the UCF Knights For Israel are the pro-Israel activist students Anthony said are needed on every campus in the United States to fight the anti- Israel forces from growing stronger. The UCF Knights For Israel are building a strong pro-Israel coalition with Chabad, Hillel, Christians United For Israel (CUFI), and the Committee for Accuracy in Middle East Reporting in America (CAMERA) on campus to help manage the anti-Israel voices at UCF.

For more information on 'Our Soldiers Speak' visit http://www.OurSoldiersSpeak.org

For more information about the UCF Knights for Israel, email Ari Hoffman at hoffmanariel@knights.ucf.edu.