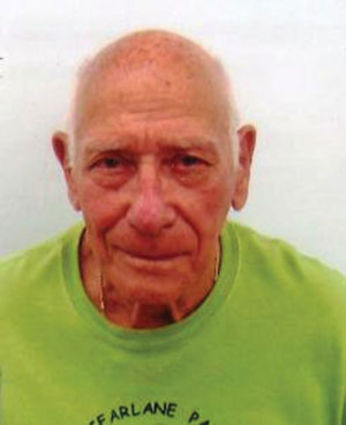 Mr. Wiesenfeld was a U.S. Navy veteran having served proudly in the Pacific during WWII. He was a volunteer with many organizations including the USO, Faith Café, the Chesed Shel Emes, tutored students in reading, and through Sar-El he volunteered each year for 12 years to serve in the Israeli Army.

In the June 28, 2013 issue of the Heritage, Gloria Yousha printed a letter he wrote to the community in her column, Scene Around, in which he encouraged his friends here in Central Florida to volunteer in the IDF program he was involved in. He wrote:

"I am about to embark on my 12th annual trip to Israel to volunteer with the IDF (Israel Defense Forces) program. The program used to be called Sar-El, which stood for Volunteers for Israel, but now is called IDF.

I will eat and sleep at an Army base and will not know which one, until I arrive in Israel. I will not be asked to do anything that is too difficult, too dangerous nor will I be asked to lift anything too heavy. Regardless of the job I am asked to do, my being there will replace a soldier.

I will work a normal four and a half day week and then will be able to go off base and go anywhere in Israel on my own and pay my own expense. There are a few hostels for the Army personnel and we are able to stay at them at no charge. I look forward to the people that I will meet...  not necessarily Jewish. They are people of all ages, from all over the world.

I would like to encourage men and women to share this wonderful experience and Israel needs you." He then encouraged folks to call him personally with any questions, and if he didn't answer, "it is because I may be in Israel."

He was preceded in death by his beloved wife of more than 20 years, Selma, and his loving companion, Goldie Shear. Mr. Wiesenfeld is survivored by his sons and daughters-in-law, Neil and Teri Wiesenfeld, Damien & Leslie Wiesenfeld; daughters and son-in-law, Ellen (Wiesenfeld) and Albert Sanfilippo, and Tiffani Wiesenfeld; sister and brother-in-law, Ethel and Norman Bige; nine grandchildren; and his former companions family, Steve and Jeff Shear and their families along with many other close friends.