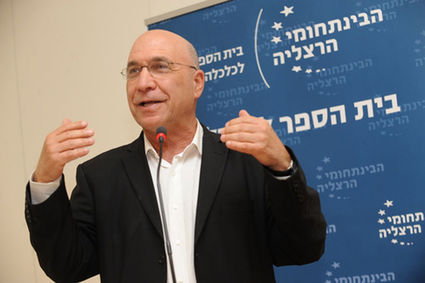 Zvi Eckstein, co-author of the 2012 book "The Chosen Few: How Education Shaped Jewish History" and dean of the School of Economics at the Interdisciplinary Center in Herzylia, Israel.

Why has education been so important to the Jewish people? Author Maristella Botticini says a unique religious norm enacted within Judaism two millennia ago made male literacy universal among Jews many centuries earlier than it was universal for the rest of the world's population.

"Wherever and whenever Jews lived among a population of mostly unschooled people, they had a comparative advantage," Botticini told JNS.org. "They could read and write contracts, business letters, and account books using a common [Hebrew] alphabet while learning the local languages of the different places they dwelled. These skills became valuable in the urban and commercially oriented economy that developed under Muslim rule in the area from the Iberian Peninsula to the Middle East."

An economic historian, Botticini earned a B.A. in Economics from Università Bocconi in Milan and a Ph.D. in Economics from Northwestern University. After working at Boston University, she returned to Italy and works at her alma mater. An economist, Eckstein received his B.A. from Tel Aviv University and his Ph.D. from the University of Minnesota. He spent five years as the Bank of Israel's deputy governor, and is now dean of the School of Economics at the Interdisciplinary Center in Herzylia. In their book, which they describe as a reinterpretation of Jewish social and economic history from the years 70 to 1492 A.D., Botticini and Eckstein say that Jews over those years became "the chosen few"-a demographically small population of individuals living in hundreds of locations across the globe and specializing in the most skilled and urban occupations. These occupations benefit from literacy and education.

"Our book begins with the profound and well-documented transformation of the Jewish religion after the destruction of the Second Temple in 70 [AD] at the end of the first Jewish-Roman war," Eckstein tells JNS.org. "Judaism permanently lost one of its two pillars-the Temple in Jerusalem-and consequently the religious leadership shifted from the high priests, who were in charge of the Temple service, to the rabbis and scholars, who had always considered the study of the Torah, the other pillar of Judaism, the paramount duty of any Jewish individual."

The Jews' new religious leadership set their people on a path to become "a literate religion, which required every Jewish man to read and study the Torah and every father to send his sons to a primary or synagogue school to learn to do the same," said Eckstein.

From an economic point of view, the authors write, it was costly for Jewish farmers living in a subsistence agrarian society to invest a significant amount of their income on the rabbis' imposed literacy requirement. A predominantly agrarian economy had little use for educated people. Consequently, a proportion of Jewish farmers opted not to invest in their sons' religious education and instead converted to other religions, such as Christianity, which did not impose this norm on its followers.

"During this Talmudic period (3rd-6th centuries), just as the Jewish population became increasingly literate, it kept shrinking through conversions, as well as war-related deaths and general population decline," Botticini told JNS.org. "This threatened the existence of the large Jewish community in Eretz Israel (the land of Israel) and in other places where sizable Jewish communities had existed in antiquity, such as North Africa, Syria, Lebanon, Asia Minor, the Balkans, and Western Europe. By the 7th century, the demographic and intellectual center of Jewish life had moved from Eretz Israel to Mesopotamia, where roughly 75 percent of world Jewry now lived."

Like almost everywhere else in the world, Mesopotamia had an agriculture-based economy, but that changed with the rise of Islam during the 7th century and the consequent Muslim conquests under the caliphs in the following two centuries. Their establishment of a vast empire stretching from the Iberian Peninsula to India led to a vast urbanization and the growth of manufacture and trade in the Middle East; the introduction of new technologies; the development of new industries that produced a wide array of goods; the expansion of local trade and long-distance commerce; and the growth of new cities. "These developments in Mesopotamia increased the demand for literate and educated people-the very skills Jews had acquired as a spillover effect of their religious heritage of study," Eckstein said.

Between 750 and 900, almost all Jews in Mesopotamia and Persia-nearly 75 percent of world Jewry-left agriculture and moved to the cities and towns of the newly established Abbasid Empire to engage in skilled occupations. Many also migrated to Yemen, Syria, Egypt, and the Maghreb; to, from, and within the Byzantine Empire; and later to Christian Europe in search of business opportunities.

"Once the Jews were engaged in these skilled and urban occupations, they rarely converted to other religions, and hence, the Jewish population remained stable or grew between the 8th and the 13th centuries," Botticini said.

The book does not whitewash the persecution that took place during the 15 centuries of Jewish history it examines, Eckstein said.

"When [persecution of Jews] happened, we record [it] in our book," he says. "[But] what we say is something different. There were times and locations in which legal or economic restrictions on Jews did not exist. Not because we say so, but because it is amply documented by many historians. Jews could own land and be farmers in the Umayyad and Abbasid Muslim empire. The same is true in early medieval Europe. If these restrictions did not exist in the locations and time period we cover, they cannot explain why the Jews left agriculture and entered trade, finance, medicine. There must have been some other factor that led the Jews to become the people they are today. In 'The Chosen Few' we propose an alternative hypothesis and we then verify whether this hypothesis is consistent with the historical evidence."

Botticini explained the key message of the book "is that even in very poor communities or countries, individuals and families should invest in education and human capital even when it is costly and it seems to bring no economic returns in the short-run."

"Education and human capital endow those individuals and those communities that invest in them with skills and a comparative advantage that pays off and can bring economic well-being and intellectual achievements in many dimensions," she said.

"A motto in which we strongly believe [is] go to the local public library and borrow a book and read it," added Botticini. "Even when you end up disagreeing with or not liking a book, it is never a waste of time reading a book. Reading and studying are precious gifts. This is the bottom line message of 'The Chosen Few.'"