By Alan Kornman
Special to Heritage 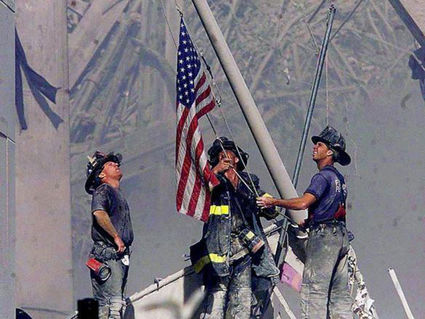 Firemen raise the American flag at the site of the World Trade Centers in September 2011. "On 9/11 Bin Laden outsmarted us and got what he really wanted.  It wasn't only to terrorize the West, but to get the U.S. out of the Middle East," says Wallace Bruschweiler.

On a chilly Thursday night while most of Orlando residents were at home keeping warm, Wallace Bruschweiler was connecting the dots on terrorist cell operations from the 1970s to today. Seventy people packed Doc's Grill on Orange Avenue to hear from a man who was fighting terrorism long before America's collective consciousness knew there was a problem.

Bruschweiler, vice president of Associates of Former Intelligence Officers Fla. Suncoast Chapter, spoke on behalf of Act For America, an organization that provides Americans with a means to be a collective voice for the democratic values of Western civilization, and against the threat of radical Islam. He spent years in the field disrupting the terrorist activities of the Baader-Meinhof Group, Red Brigades, Action Directe, IRA, and ETA. These groups were responsible for over 296 bomb attacks, arson, counterfeiting, murder, kidnapping, kneecapping, assassinations, to further their left-wing anti-colonialist / Communist politics.

Terrorism is defined as the systematic use of violence to achieve a political objective. Bruschweiler says understanding the definition is something the majority of the American people get. It is the business model the terrorists use that is the important element in understanding this issue behind the headlines. The mainstream press and academia have done a great disservice to the American people by focusing on the gruesome effects of terrorist operations rather than the solutions needed to combat terrorism.

The first clue in unraveling this mystery of terrorism is information Bruschweiler gathered while conducting counter terrorist operations against many terrorist groups. For example, to confuse law enforcement the Red Brigades used the names of approximately 500 terrorist groups to appear bigger and more numerous than they were. The effect of this tactic resulted in law enforcement spending time and resources going after these empty terrorist shells rather than cutting off the head of the terrorist snake. Islamic terrorists of today are using this same methodology to confuse the American people.

Islamic expansionism: "My message is very clear, we have to stop Islamic expansionism and stop importing trouble." This can be accomplished by a complete Congressional overhaul of the Refugee Resettlement Act and slowing down Muslim immigration from terrorist supporting countries until we can properly vet the lives of these political refugees.

American's today must understand that our Southern borders are weak and being exploited by Muslim Brotherhood terrorists. Feature-wise Mexicans and South Americans are similar to Arabs. These Arab operatives in Mexico, Venezuela, and the South American tri-border area are trained how to hide their true identity from American law enforcement if they are captured crossing through our porous southern borders and blending into the American population. This is why we have to stop this massive undocumented immigration into the United States because it is now a top National Security issue.

Nuclear weapons in Iran: President Obama's current policies regarding a nuclear Iran are eerily reminiscent of Chamberlain negotiating 'peace in our time' with the Nazis. "I believe our current policy is dangerous and misguided," Bruschweiler affirmed.

Israeli "apartheid": This is an untold story Bruschweiler shared, Jordan's King Hussein killed more Arabs than Israel in all her wars since 1948, and he did that in 48 hours. He got fed up with what was going on in his kingdom and he gave carte blanche to his army and they killed 15,000 Palestinian Arabs with allegiance to Arafat. The rest fled, many of the high-ranking Palestinian officers crossed into Israel asking for protection, the rest went to Lebanon via the Chouf area. The Druze said they wanted $100 for each Palestinian crossing into Lebanon and earned a lot of money. That is how Arafat escaped and established himself in Beirut.

Benghazi: "All I will say about Benghazi is that all the lies spit out about what happened there was a shame. The Naval Air Station in Sigonella, Italy is only 90 minutes from Benghazi and I will leave it there for you to make your own conclusions."

"We played the wrong card in Egypt by insisting on having a fraudulent election and putting Morsi into that place. Morsi as far as I'm concerned is The Muslim Brotherhood and our military experts know The Brotherhood had their hand in Benghazi. Ambassador Stephens was there on a very specific mission. That mission was to arrange with the Turkish ambassador to Libya, a shipment of weapons to Syria.

"The Israelis have a very dynamic and elastic intelligence apparatus and they take a pro active approach to any scenario. For each incident they know what to do and execute it. With Benghazi, it's been over a year and nothing has happened. The result is the terrorists do not fear the Americans, which only leads to more terrorism.

Terrorist threats: This is the one thing I insist that people have to understand. Do not disregard messages issued by terrorists, what they write or say in videos they will definitely try to execute. Do not say they are fanatics, the fact they are fanatics is beside the point.

NSA privacy invasion: I personally have no problem with having all my calls and emails checked, I have nothing to hide. The thing is with this collection of mega data by the NSA is that its humanly impossible to connect the hundreds of millions of dots. NSA uses keywords but our government has to have the human intelligence at the ground level to be effective.

The Muslim Brotherhood: A big mistake America did was for Jimmy Carter to send Khomeini back to Tehran in 1979. We thought he was a decent and religious man and got ourselves into big trouble. There are clear connections between The Muslim Brotherhood and this pivotal event in American foreign policy history. There is clear intelligence that Ahmadinejad was the mastermind behind the American hostage crisis. And the assassination of Anwar Sadat was coordinated and executed by The Muslim Brotherhood.

Here is a case study on how the Russians successfully dealt with the Shiite Muslim Amal Movement who later morphed into Hezbollah in Beirut. In 1985, The Amal terrorists kidnapped four Soviet diplomats, killing one in the process. Sheikh Fadlallah was the mastermind behind the kidnapping. The Soviets sent in the Alpha Group who had local hoodlums kidnap a distant cousin of Sheikh Fadlallah and told him that if you do not release our diplomats we will send your cousin back to you piece by piece. Soon thereafter, the Soviet diplomats were released and Fadlallah's cousin was returned minus fingers and hands. From that day forward, terrorists never kidnapped another Soviet/Russian diplomat for fear of a swift retribution. The point of this story is to illustrate that successful counter terrorism measures, at times, must resort to using the same brutality of the terrorists to send a clear message that terrorist operations will result in dire consequences. This Alpha Group is currently operating in the area of the Sochi Olympics.

A name by any other name: Please from now on when you hear whatever names of various terrorist organizations, forget the name - its The Muslim Brotherhood. People tell me that not all Muslims are bad and in that I agree. In my travels throughout Europe, Middle East, and North Africa as a tourist or in some other capacity, I have befriended selected Muslims and maintain those friendships today. However, one cannot escape the fact that the majority of terrorist events around the world are committed by the followers of Islam to achieve their political ends. My Muslim friends taught me the ultimate goal of these terrorist events are to further the Islamic expansion and Caliphate around the world.

Western culture vs. Mid-eastern culture: To understand the Middle East one must understand tribalism. In America we have 50 separate States under One America. It is the opposite in the Middle East. It is hundreds if not thousands of Hatfield and McCoy family tribes fighting for power and resources one day and joining forces the next to fight any perceived enemy of Islam.

For example, Iraq is made up of 72 tribes. A tribe is a large family and they rule by force or agreement with another tribe. Then we come in as a very clever white man and we will redraw your borders. It is insane these borders, you have families that were uprooted who can't travel freely from one border to another. In the minds of many Middle Eastern tribes they don't recognize the borders in their hearts and deep down they hate us Infidel Americans and Europeans for it.

People always ask me for the solutions to these world problems. Earlier, I said you can help to get the right people elected to office.

Today's academia is forming our next generation and they are mostly leftists. The other problem is the family. This is where it starts and all of us should look at this and try to change things for the positive, beginning at your dinner table. Sit down with your family and talk about matters important to us and them.

These problems of all this terrorism, bombings, bloodshed, Islamic expansionism, Communist threats, North Korea, a nuclear Iran are problems that will be left for our children and grandchildren to deal with in one form or another.

Talking to your children about matters that are facing the family both good and bad is the first step. From these discussions your children will begin to understand the economics and hardships of keeping a family together, putting food on the table, paying the mortgage, and keeping gas in the car. And by your example your kids will love and respect you more and as they see you concerned about Islamic terrorism and a nuclear Iran they too will become interested and be a part of the solution not a part of the problem.

This is an inaccurate article that is right wing propaganda. Majority of terrorist attacks in the U. S. for the past 12 years were perpetrated by environmental and animal rights groups followed by anti-abortion extremists. Terrorism has very little to do with religion and a lot to do with politics. Both right and left wings do us a great disservice by bringing their own political biases into the discussion. The solution presented is a violation of the Geneva Convention.