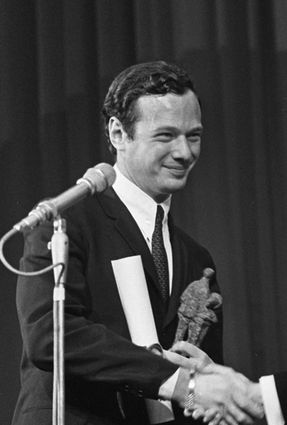 Brian Epstein, manager of the Beatles, receives the Edison Award for the Beatles at the Grand Gala du Disque in 1965.

Amid the celebrations and hoopla surrounding the 50th anniversary of the Beatles' arrival in America and their appearance on "The Ed Sullivan Show," the man Paul McCartney called "the fifth Beatle" is not often mentioned. But experts say that without him, the Beatles as we know them would not have existed. That man is Brian Epstein, the band's Jewish manager, who died of an accidental drug overdose in 1967.

Epstein's grandfather, Isaac Epstein, was from Lithuania and arrived in England in the 1890s at the age of 18. His grandmother, Dinah, was the daughter of Joseph and Esther Hyman, who had emigrated from Russia to England.

Asked to write an introduction to Epstein's autobiography, "A Cellarful of Noise," Beatles scholar Martin Lewis-who emceed the Fest for Beatles Fans in New York City this month to celebrate the 50th anniversary of the band's U.S. arrival on Feb. 7, 1964-said Epstein's death "was a major contributing factor to the breakup of the Beatles." John Lennon himself said when the manager died, "I knew that we were in trouble then."

Lewis's association with the Beatles dates back to 1967, when as a teenage fan he was engaged to compile the discography for Hunter Davies's official biography of the group. Years later, he wrote, hosted, and produced the TV documentary "Re-Meet The Beatles!"

"Epstein discovered the Beatles and guided them to mega-stardom, making them the most successful musical artists of all time," Lewis told JNS.org. "But, regrettably, the man who did so much for the Beatles, and who died tragically in 1967, has become a comparatively forgotten man since his death. Almost a 'nowhere man.'"

Lewis in June 1998 helped launch a website that became the command center for a campaign to have Epstein inducted into the non-performers' section of the Rock and Roll Hall of Fame. With combined online and hardcopy petitions, the site gathered more than 50,000 signatures, and in December 2013-15 years after the petition was started-it was announced that Epstein would receive the 2014 Rock and Roll Hall of Fame Ahmet Ertegun Award for Lifetime Achievement (formerly the non-performer award).

Born in 1934 in Liverpool, England, Epstein first got involved in the music business when he took over the record department of his family's music store, NEMS.

"His devotion to making the store a success transformed it into an essential gathering place for the young people of northern England who sought to stay current with pop music. It was at NEMS that Epstein first became aware of the Beatles," Margaret Thresher, director of communications at the Rock and Roll Hall of Fame, told JNS.org.

Thresher said Epstein immediately recognized the Beatles' potential as performers and recording artists. He signed them to a management contract in early 1962 and was the driving force behind getting the band a recording contract with Parlophone later that year.

"Brian's keen eye for style and fashion helped shape a unique, charismatic identity for the band," Thresher said. "His management style forged success for the Beatles, and he was completely dedicated to the band. Paul McCartney said, 'If anyone was the fifth Beatle it was Brian.' People talked about George Martin as being the fifth Beatle because of his musical involvement, but, particularly in the early days, Brian was very much part of the group."

Yet Epstein's relationship with the Beatles was not all rosy. When the band members first told their families that Epstein would be their manager, the response to the news was mixed, according to Philip Norman's book "Shout! The Beatles in Their Generation."

"Olive Johnson, the McCartney family's close friend, received a call from Paul's father (Jim) in a state of some anxiety over his son's proposed association with a 'Jewboy,'" Norman wrote. "Since Olive knew the world so well, Jim asked her to be at Forthlin Road on the evening that Brian called to outline his intentions for Paul. 'He turned out to be absolutely charming,' Olive says. 'Beautifully mannered but completely natural. He and Jim got on well at once.'"

Epstein grew up in a post-war British society in which many people overtly and comfortably indulged in anti-Semitism.

In terms of prejudice, Epstein had to deal with two things in England that helped contribute to his personal unhappiness and fear.

"One was being Jewish and the other was being gay, at a time when the word gay wasn't even in common usage," Lewis said. "What Brian went through is not fully appreciated but should be appreciated by the Jewish and gay world. What a great man. Without this British, Jewish, gay man, the world would never have heard the Beatles."

Lewis said Epstein "has long been the most unsung hero across the Beatles' universe."

"First of all, to be crystal clear, everything in the Beatles' world starts with their incredible talent," he said. "Without their genius for music there would have been nothing. But, as my dear friends Derek Taylor, Ray Coleman, George Martin and Andrew Loog Oldham all made clear to me over the years, without Brian Epstein's passionate belief in them and without his Herculean efforts, the Beatles' genius might well have gone undiscovered by the world."

Though Peter Brown, a personal assistant to Epstein and the Beatles during the 1960s, wrote in his memoir that he had once found a suicide note written by Epstein, Lewis maintains that Epstein's death came from an accidental drug overdose. 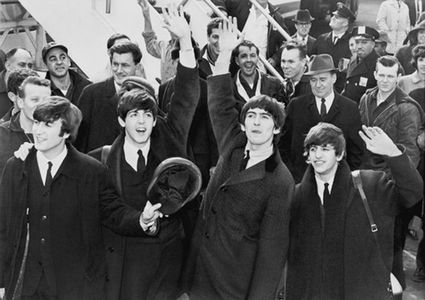 Library of Congress via Wikimedia Commons

The Beatles wave to fans after arriving at New York's John F. Kennedy International Airport on February 7, 1964, marking their first appearance in the U.S.

"The inquest was absolute," Lewis said. "However, he had unhappiness. He was always fearful. Knowing the parasitic and venal attitudes of the English tabloids, he never wanted his personal life to be a burden on the Beatles. He lived in fear that if he was ever outed publicly, or involved in some upsetting circumstance where his homosexuality came to public light, that would hurt the Beatles. It was constant running anxiety but not depression." Five decades after the band's historic appearance on "The Ed Sullivan Show," Lewis explains that Epstein understood how the Beatles "needed to have their rough edges polished to get on television."

"To do that he got them to wear suits and do that synchronized bow," Lewis said. "He told them to put the focus on their music, not just telling jokes. All that polish was essential. He did this before they got on television, and then when they did get on they were polished and ready to go. They were hugely excited to be in America. The reason they looked so confident was because Brian had instilled that in them."