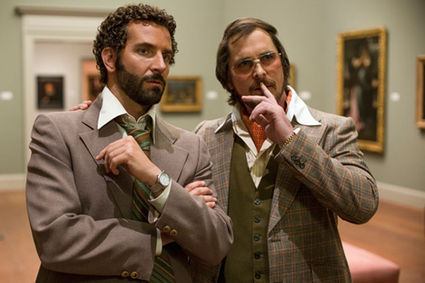 Bradley Cooper (l) as Richie DiMaso and Christian Bale as Irving Rosenfeld (a character based on the true story of Jewish con artist Melvin Weinberg) in the Oscar-nominated "American Hustle."

When former New York Times reporter Leslie Maitland first heard that Amy Adams would be in "American Hustle," she smiled, thinking the actress would portray her.

In director David O. Russell's film about the Abscam scandal, Adams stars alongside Christian Bale, Bradley Cooper, and Jennifer Lawrence. The movie received 10 Oscar, tied with "Gravity" for the most nominations this year.

Back in the late 1970s and early 1980s, Maitland was the reporter who broke the Abscam story. But Adams does not portray Maitland in the film. Rather, she plays the character of Sydney Prosser, a stripper/con artist who creates the fake persona of a British heiress named Lady Edith Greensley.

The film follows a script whose details diverge from the actual events of Abscam-not an uncommon practice for Hollywood movies based on true stories.

"There weren't any women involved in Abscam," Maitland told JNS.org. "The whole thing happened accidentally. The FBI had arrested Melvin Weinberg on charges related to a phony money-lending scheme. He was a con-man who they enlisted to try to help them in cases involving stolen art and stolen certificates of deposit."

Weinberg, an infamous Jewish con artist portrayed by Christian Bale as Irving Rosenfeld in "American Hustle," agreed to cooperate with the FBI in exchange for leniency, and to help the federal agency set up a sting aimed at retrieving the art and the counterfeit CDs.

"They worked out a plan where they would set up a phony company and pretend to represent a wealthy Arab sheik that was eager to invest a great amount of money in the U.S. in ventures both illegal and legal," Maitland said.

The FBI called the sheik's company Abdul Enterprises, which became known as "Arab scam," and then Abscam.

"This was not originally aimed at corruption in Congress. It would mushroom and turn into the greatest political corruption investigation of the twentieth century," said Maitland.

Weinberg led the FBI to meet Angelo Errichetti, the corrupt mayor of Camden, N.J., portrayed by Jeremy Renner as Carmine Polito in the film. It was because of Errichetti, Maitland said, that the FBI got the opportunities to bait members of Congress with bribes.

"They were told these members of Congress would take bribes because there were some con men who said they would try to get Abdul Enterprises to invest in casino gambling in Atlantic City," Maitland said. "The mayor, they were told, would help them get a gaming license in exchange for him getting a piece of the action. Through Errichetti they were gradually introduced, either directly or through middlemen, to members of Congress who were more than willing to meet with them under shady circumstances and do favors for Abdul Enterprises in exchange for cash payments."

In an interview with the New York Times, the film's director Russell was asked if Christian Bale were the first actor one might think of to play Rosenfeld, the overweight Jewish con artist from Long Island.

"I knew Christian would not be able to resist this person," Russell said.

"I believe that every movie in a way is about narrative. What narrative is the character telling himself? Christian and I loved that this man was an artist, constructing his identity, not just at a superficial level but at a soul level. We would talk about him as a director of a theater company-as a director of his own life," added the director.

Maitland said the Abscam story changed her life. In her story dated July 25, 1982, Maitland-who at the time was covering the U.S. Justice Department in Washington, D.C.-wrote the following: "Abdul Enterprises Ltd. may have looked like a gold mine to members of Congress who accepted money from associates of Arab sheiks... But when the congressmen realized that they had stepped onto a land mine instead-that the sheiks were part of a sophisticated undercover operation-they raised a cry that is still echoing in Washington more than two years later."

"Since Abscam first came to public attention in February 1980, the startling news that one senator and six congressmen had been tricked in a sting-and caught on videotape taking bribes-has raised questions about the uses, and the potential abuses, of undercover tactics" she wrote. "The subject has remained a topic of spirited debate, and not just in the courts, where the congressmen's appeals are pending."

All of the convictions were upheld.

After viewing "American Hustle," Maitland said the main thing the filmmakers got right is that Weinberg was an extremely adept con man.

"One of the brilliant things about Weinberg, at first meeting him, is this-you would not take him to be such a wily con man," she told JNS.org. "He looked like an overweight Jewish guy who lived on Long Island and smoked cigars. He did have a comb-over, but he was gray and considerably older than Christian Bale portrays him in the movie."

Weinberg ended up being paid by the FBI and avoiding prison. This, and the fact that other middlemen were paid, irked some, especially in the U.S. Senate. In July 1982, Maitland described in her reporting that the "question whether the FBI paid a 'bounty' to those who placed public officials in [a] position to be bribed" touched off a debate at Senate hearings on undercover activities.

While Maitland told JNS.org she "can't really speculate about the degree of corruption that goes on in Congress now," she thinks campaign contributions "are made with the expectation that members of Congress will advance the interests of people who are their large contributors."

"But there is a fine line between making campaign contributions and the expectation that a legislator will advance your interests, and setting up a quid pro quo where someone says, 'If you promise to do X, Y, or Z, I will give you $50,000," Maitland said. "It was that understanding that lay at the heart of the criminal cases in Abscam. These people made a promise to do something, and they pocketed the cash."