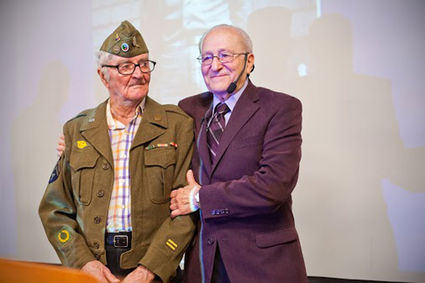 After sharing his harrowing story of endurance during the Nazi occupation of his home country, then recalling his internment in Auschwitz and liberation in Buchenwald, Irving Roth came face to face with one of his American liberators.

His audience was held in rapt attention as Roth began the evening sharing his memories.

"It was a balmy evening in May of 1944, I was 14 years old, I had been locked up in this cattle car for three days and three nights, with no place to sit, no bathrooms, no windows, all we had was this bucket. I jump off the train and all I see are guards with submachine guns and dogs, yelling at me, 'Raus! Raus! Get out and form lines!'

"In the distance I see flames coming out of chimneys. I'm there with my grandfather, grandmother, aunt, cousin, and my brother, 3 years older than I. Suddenly I am separated from grandfather and grandmother, they are marching to the right to those buildings with chimneys and flames. Where are they going? What is that place? My brother and I are separated and moving to the left, to another part of the camp. This place is Auschwitz!"

On Feb. 20, the UCF Chapter of CUFI (Christians United For Israel) hosted Roth before a 240-plus person packed house at the brand new Hillel building off the UCF campus.

Roth shared his agonizing experiences in detail. He told how his grandparents and cousin, along with 3,000 other Jewish men, women and children were systematically killed in the gas chambers.

"They are waiting for water to come out of the shower heads but none of that happens. What's happening is some material coming through holes in the ceilings that looks like crushed marble," Roth vividly described. "As this crushed marble descends, the room fills with smoke, they can't breathe. Minutes go by, my grandmother, aunt, 10-year-old cousin, and a thousand women in this room are dead. In another building a thousand men and another thousand women are dead."

Of the 4,000 people who arrived in Auschwitz with Roth, within 24 hours all but 700 were reduced to ashes.

Roth gave the audience a history lesson of events that led to the Final Solution, and the leaders who had a role in its development.

"Each day, week, and month new laws are passed against Jews. Slowly step-by-step, separation of Jews and non-Jews was taking place," he shared.

"The idea that Jews are different penetrated the minds, souls, and hearts of the population."

By the summer of 1942 death camps named Chelmno , Belzec, Sobibor, Treblinka, Auschwitz-Birkenau, and Majdanek were in operation.

In the winter of 1945, Roth and 60,000 others marched for three days on a death march from Auschwitz to a train station, then loaded on cattle cars to the Buchenwald death camp. The Americans were close and bombing the city around Buchenwald. "We could not march because the bombs do not know if you are a Jew or a German and the Nazi guards did not want to die," said Roth.

By 3 p.m., on April 11, American soldiers walked into Roth's barracks. "The messiah had arrived," Roth proclaimed.

"These two young battle hardened soldiers looked at this group of kids weighing 75-80 pounds who were nothing but mere skeletons. These two soldiers who had seen horrible death on the battlefield broke down, they could not comprehend the horror they saw at Buchenwald."

Unbeknownst to Roth or the audience, CUFI event planner Gabriel Aviles had received a call from an Orlando man who saw a community event listing in the Orlando Sentinel for Roth's talk. This Orlando man said he was part of the American unit that liberated Buchenwald on April 11, 1945.

Corporal Kenneth Berthold, just three or four years older than Roth, was with the 6th Armored Division of the U.S. Third Army. He brought a photo album to the lecture with pictures he had taken inside the Buchenwald death camp.

Corporal Berthold survived the invasion of Normandy, Battle of the Bulge, and liberated the Jews of Buchenwald. That evening, the audience who came to hear Roth share his story, witnessed a Holocaust survivor embracing one of the American servicemen who liberated him from the living hell of the Nazi death camp called Buchenwald.

The Holocaust survivors are few, and quickly approaching 90 years of age along with those who liberated them. These two men meeting each other by chance in Orlando was a memorable moment, not soon to be forgotten by those who witnessed this reunion.