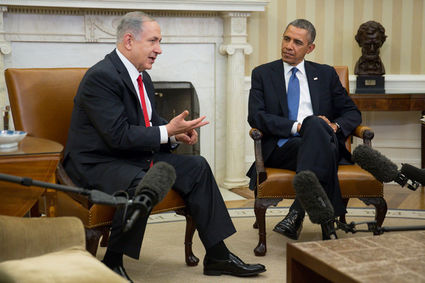 Israel Prime Minister Benjamin Netanyahu sits with President Obama during a meeting in the Oval Office on Mar. 3, 2014 in Washington, D.C.

"The greatest challenge, undoubtedly, is to prevent Iran from acquiring the capacity to make nuclear weapons," Netanyahu said, according to a transcript of his remarks released by his communications office. "I think that goal can be achieved if Iran is prevented from enriching uranium and dismantles fully its military nuclear installations."

Netanyahu told Obama that "if that goal can be achieved peacefully and through diplomacy, I can tell you that no country has a greater stake in this than Israel."

He said, "as you know and I'm sure you'll appreciate, Iran calls openly for Israel's destruction, so I'm sure you'll appreciate that Israel cannot permit such a state to have the ability to make atomic bombs to achieve that goal.  We just cannot be brought back again to the brink of destruction. And I, as the Prime Minister of Israel, will do whatever I must do to defend the Jewish state."

On the ongoing U.S.-brokered peace talks between Israel and the Palestinian Authority, Netanyahu thanked Obama and Secretary of State John Kerry for the "tireless efforts" that Kerry "has put into this quest."

"The 20 years that have passed since Israel entered the peace process have been marked by unprecedented steps that Israel has taken to advance peace," Netanyahu said. "I mean, we vacated cities in Judea and Samaria. We left entirely Gaza. We've not only frozen settlements, we've uprooted entire settlements. We've released hundreds of terrorist prisoners, including dozens in recent months."

"And when you look at what we got in return, it's been scores of suicide bombings, thousands of rockets on our cities fired from the areas we vacated, and just incessant Palestinian incitement against Israel. So Israel has been doing its part, and I regret to say that the Palestinians haven't."

"Now, I know this flies in the face of conventional wisdom, but it's the truth," Netanyahu said. "And the people of Israel know that it's the truth because they've been living it. What they want is peace. What we all want fervently is peace. Not a piece a paper-although that, too-but a real peace; a peace that is anchored in mutual recognition of two nation states that recognize and respect one another, and solid security arrangements on the ground."

"And I hope [PA] President [Mahmoud] Abbas does this, as I hope that he'll take seriously Israel's genuine security needs. Because, as you know and I think everybody does, in the Middle East, which is definitely the most turbulent and violent part of the Earth, the only peace that will endure is a peace that we can defend."

"And we've learned from our history-Jewish history, but I think from general history-that the best way to guarantee peace is to be strong.  And that's what the people of Israel expect me to do-to stand strong against criticism, against pressure, stand strong to secure the future of the one and only Jewish state."

Joshua Levitt is senior correspondent for The Algemeiner, an international Jewish newspaper based in New York City that reports from across the Middle East.