Take the J-Street challenge, it is an eye opener 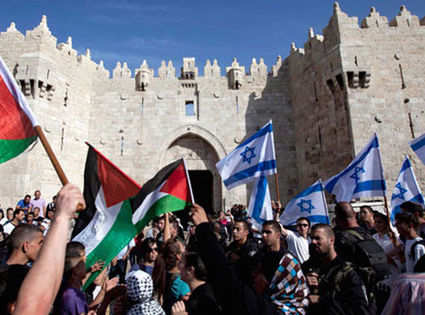 It's important to be well-informed about current events-especially events concerning Israel.

Since day one of Israel's independence, this little nation that inhabits only one percent of the Middle East has been fighting for its piece of ground and its peace.

There are so many American organizations, many called NGOs (nongovernment organizations) that say they are pro-Israel and/or pro-peace. They all say they want peace in the Middle East, but at what cost? And who is footing their bills? These are questions everyone should ask of any organization that says they support Israel.

Recently the documentary film "The J-Street Challenge: The Seductive Allure of Peace in Our Time" was shown in the Orlando area. This 64-minute film exposes hypocrisies in the J-Street organization. Founded in 2008 by Jeremy Ben-Ami and others in response to AIPAC as the only voice for American Jews, its goal is to "provide a home for pro-Israel, pro-peace Americans who believe that a two-state solution to the Israeli-Palestinian conflict is essential to Israel's survival as a nation."

It is a good premise to form an organization. Everyone wants peace. However, no one should walk into any peace agreement with blinders on-not knowing the backstory, the dangers. This is part of what the film brings to light. And this is what each and every person who professes to want peace in the Middle East needs to understand.

This is not an Israeli-Arab conflict. It is an Arab war against Israel. The three major wars and two intifadas were not started by Israel. As Harvard professor Ruth Wisse says, "It is the conflict of over 20 countries, with an enormity of land, more land than they know what to do with, that refuse to allow one people its sliver of land."

No Israeli leader has as yet said he would annihilate the Palestinian people. And yet, Arab leaders have boldly stated that they will push Israel into the sea.

When Israel pulled out of Gaza and gave that parcel of land completely over to the Palestinian people, the rocket fire intensified. Greenhouses left by Israelis were trashed. How does one make peace with people who do this?

J-Street has taken its message to college campus with J-Street U, where many Jewish students are embarrassed about being Jewish these days. J-Street U emphasizes pro-peace, rather than pro-Israel. What college student is opposed to peace?

Adults today were the college students of the 60s-the demonstrators against the Vietnam conflict, the young people who were the flower children, the ones who said "Make love not war." It feels good to get along with everyone. It is good to treat people with kindness. It feels good to try to create bonds with those who have opposing views.

However, several points come out in the film that reveal that J-Street reeks of double-talk and promotes "moral narcissism," a phrase coined by Richard Landes. "This is an overwhelming concern for being a nice person... In this way, you can completely identify with the people who hate you and consider you their mortal enemy," he stated.

Samantha Mandeles, a campus coordinator for CAMERA, put it this way, "That's the good Jew, the Jew that helps everyone else, who puts others before themselves, who cares more about strangers than they do about family. If a Jewish student feels that repairing the world and being a universalist and progressive is equivalent to being Jewish, then they can forget being proudly Jewish and Zionist."

J-Street U can be appealing to idealistic 20-somethings who want to make the world a better place. But while being "gentle as a dove," one also has to be "wise as a serpent."

This documentary is an eye-opener. It makes one really think. For more information about the film, please contact Sandi Solomon at 407-575-9899.