Irving Kolin, M.D., made the world a better place 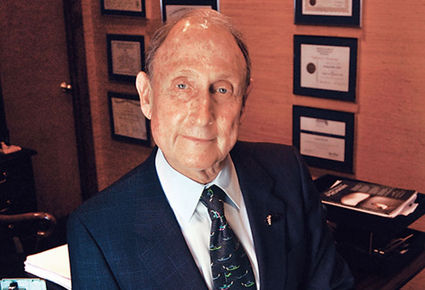 Irving S. Kolin, M.D., of Winter Park, died on April 15, 2014, at the age of 74 after a brief battle with pancreatic cancer. He was a doctor whose greatest joy was to give people the ability and skills to help themselves. When patients would thank him for saving their lives, he would tell them that he only helped them to heal themselves.

Karen Kolin, daughter-in-law and chief clinical research coordinator of the Kolin Research Group, called Dr. Kolin "father, friend and mentor." He once told her about his decision to become a doctor. "His father was observant and raised him to be as well-observant of the Jewish laws and specifically Shabbat. He didn't pursue art lessons as a young child because the classes were on Saturday. But, when he was older, even though he knew he would have to write on Saturdays, he decided to become a doctor so he could help make the world feel better," she said.

"And how!" continued Karen. "Everyday Dr. Kolin made a difference in people's lives. The staff and I never knew what he said to the patient in the room but we could physically see the difference in them over time-some instantly and some gradually. He was always available for a patient or their doctor-on the phone or in person. That level of attention took time and those patients who were kept waiting knew it was okay because it might have been them needing more time at their last visit."

Dr. Kolin was born in Brooklyn, N.Y., to Leo and Jean Kolin who had escaped the Nazis during the Anschluss. He attended Lincoln High School and graduated from the University of Buffalo as a Phi Beta Kappa. Dr. Kolin later studied at S.U.N.Y. School of Medicine at Buffalo, graduating with honors. He did his internship and residency at Payne Whitney Clinic at Cornell Medical Center in New York Hospital.

"While my dad had a happy childhood in the early '50s as a Brooklyn boy, he became a man much sooner than he might have at 15, when his father died suddenly in a car accident. He told his mother and sister not to worry and that he would become a doctor, and that's just what he did. He came from humble beginnings and a family that had wisely escaped the Nazis with the clothes on their backs. Through hard work and fortunate ties to relatives already in America, they succeeded," his son, Lawrence, shared during the service at Congregation Ohev Shalom.

During the Vietnam War, he served as a commander, opening the Orlando Naval Hospital in 1969. Following his Navy service, Dr. Kolin established a private medical practice in 1971. Dr. Kolin was chief of psychiatry at Orange Memorial Hospital, later ORMC, and established the med-psych and addictions unit at Florida Hospital. He was president of the Orange County Mental Health Association, had multiple board certifications and practiced psychiatry for decades, serving the community's mental health needs and pioneering psychopharmacological clinical research at Kolin Research Group.

Dr. Kolin was a Distinguished Life Fellow of the American Psychiatric Association and Life Fellow of the American College of Psychiatrists. He shared his passion for practicing medicine with many colleagues and educated future doctors, serving on the faculties of both the University of Florida and University of Central Florida College of Medicine, which he was instrumental in founding.

Former news anchor Barbara West relied on Dr. Kolin as her "go to" person and trusted resource for all things medical. He made himself available to her to explain health issues. "You always helped this, at first inexperienced, health reporter understand the full scope of the issue. You made me a better reporter and I hope a better person. That, I believe, is an underlying theme of who you are and the purposeful life you have been living," she said in a letter to him during his final days.

He and his wife, Shelley, a prominent designer, worked together on fundraisers for the Cancer Society, March of Dimes, Hadassah, and Orlando Ballet. He was a devoted husband and father to adoring children and Papa to his granddaughters. He enjoyed living in Central Florida and engaging in outdoor activities, waterskiing well into his 60s.