Each May histories collide 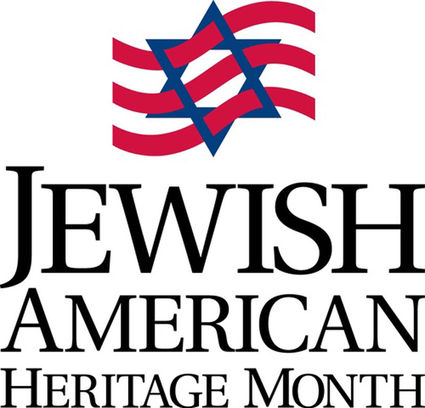 May is Jewish American Heritage Month (JAHM). In 2006, President George W. Bush-following the efforts of U.S. Rep. Debbie Wasserman Schultz (D-FL), the late U.S. Sen. Arlen Specter (D-PA), the Jewish Museum of Florida, and others in South Florida's Jewish community-proclaimed the month's 31 days as an official recognition of more than 350 years of Jewish American achievements and contributions to the United States.

JAHM's theme this year is American Jews and tikkun olam (repairing the world), and along those lines, its 2014 iteration honors the 100th anniversary of a humanitarian group-the American Jewish Joint Distribution Committee (JDC).

"JAHM is pleased to partner in this milestone year with JDC, which remains the essential Jewish international humanitarian organization, putting into action the precept that all Jews are responsible for one another and for all humankind," said Abby Schwartz, national coordinator for JAHM. "Since JDC's founding in 1914 at the outset of WWI, the organization's 10 decades of rescue, poverty alleviation, Jewish community development, leadership training, social innovation, and disaster relief work has benefited millions of people and transformed countless lives in Israel and more than 90 countries."

Marcia Jo Zerivitz, founding executive director of the Jewish Museum of Florida, has been involved in JAHM since the inception of the idea. She was the one who originally spoke to Rep. Wasserman Schultz about getting the national month officially designated, and in 2003 she helped secure the recognition of Florida Jewish History Month-marked each January-in Florida's state legislature.

Zerivitz noted that more than 100 years ago, famed American author Mark Twain, in an essay titled "Concerning the Jews," suggested that Jews "ought hardly to be heard of" because of their minimal numbers. Yet Jews have "always been heard of," Twain wrote.

"[Twain] went on to comment on what Jews have contributed and observed that all the accomplishments were made with our hands tied behind us," Zerivitz told JNS.org. "The history of the Jewish people in America is filled with bold, courageous women and men, creative thinking skills and achievements trumping discrimination. It is the story of a people who brought their history, traditions, language, culture and ideas to a new land where they, like all immigrants before them and since, acculturated to a new life."

While they settled and became Americans, Jews "influenced the growth and development" of the country, said Zerivitz.

"Facing obstacles, primarily anti-Semitism, American Jews became heroes by setting examples of the best a human being can do by working not only for themselves, but also for the improvement in the quality of life for all Americans," she said.

A notable example of such an American Jew is inventor of the shopping cart Sylvan Nathan Goldman, whose photo and story appear on a box of matzah from Manischewitz-JAHM's founding corporate sponsor. This year, Manischewitz released limited-run packaging on its five different matzah boxes, featuring fun facts about notable Jewish American inventors, comedians, and historical figures. Each of the five boxes offers a different set of stories, and all of the boxes feature "Passover in America: Historical Perspectives," a full-color compilation of 18 documents, letters, recipes, newspaper articles, and photographs from the collections of the Cincinnati-based Jacob Rader Marcus Center of the American Jewish Archives.

The shopping cart was introduced on June 4, 1937, in the Humpty Dumpty supermarket chain in Oklahoma City, of which Goldman was the owner. Originally a self-service grocery retailer, Goldman-a native Oklahoman born to a Lithuanian-immigrant father and French-immigrant mother-observed the shopping habits of his customers and realized he could provide better service and sell more groceries if only he had some means of helping them carry more merchandise. From this simple observation, the shopping cart was born.

Goldman's first shopping cart prototype was constructed from a folding chair. It utilized two wire hand baskets to carry merchandise. Goldman founded a company to manufacture his new idea, calling it Folding Carrier Basket Company after the design of the first cart. With only an 8th grade education, Goldman revolutionized supermarkets and retailing in America today. His other inventions include the grocery sacker, the folding inter-office basket carrier, the milk bottle rack, and the baggage cart.

In Florida, JAHM will be marked by the airing of the new documentary "A Call to Serve: Florida Jews and the U.S. Military," on the PBS network affiliate WLRN on May 18, and 29.

"The film covers immigration, patriotism, acculturation, citizenship, courage, facing obstacles, and leadership," the Jewish Museum's Zerivitz told JNS.org. "The courageous people portrayed risked their lives for the dreams of our nation. These individuals' stories and their character traits are role models for future generations." 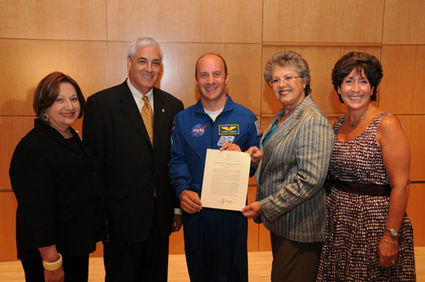 On Aug. 18, 2010, the 2006 proclamation from President George W. Bush that created Jewish American Heritage Month (JAHM) was presented by NASA astronaut Dr. Garrett E. Reisman (center) to Marcia Jo Zerivitz (second from right), founding executive director of the Jewish Museum of Florida, at a ceremony at the National Museum of American Jewish History in Philadelphia. In May 2010, the JAHM proclamation traveled 4,879,978 miles with 186 orbits of the earth aboard the U.S. space shuttle Atlantis.

Zola-who besides for his role at the American Jewish Archives is the Professor of the American Jewish Experience at Hebrew Union College-Jewish Institute of Religion in Cincinnati-described what he believes are the three top American Jewish achievements over time. He told JNS.org that those achievements include U.S. Jewry's leading role in compelling the nation to fulfill the lofty ideals that are enshrined in its founding documents; American Jews' enthusiastic participation in cultural affairs and in the betterment of society; and Jewish innovations that have influenced Jewish life in North America and around the world.

According to Zola, Jewish innovation was enabled by the openness of American society-namely, the separation of church and state and the Constitution's guarantees of religious freedom. That openness, Zola explained, fostered a creative and dynamic expression of Judaism in the U.S., and as a result American Jewish scholarship, organizational creativity, and culture spawned Jewish innovations and initiatives that benefited Jewish life worldwide.

Zola said he remains guided by the expression of his teacher-the late Jacob Rader Marcus, namesake of the American Jewish Archives center-who advised, "A people that is not cognizant of its past can have little hope for its future."