92Y chooses non-Jewish leader. Is that a problem? 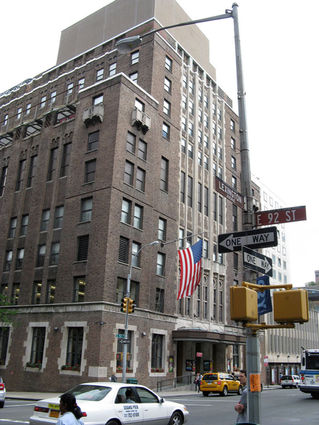 The announcement that Henry Timms would lead the famed Upper East Side cultural center represented the culmination of the Y's effort to move past the scandal-tainted tenure of its previous director, Sol Adler, who was fired last July. Adler's dismissal followed revelations that he had a long-term affair with his assistant, Catherine Marto, whose son-in-law was under investigation for allegedly taking part in a kickbacks scheme at the Y.

But the move to make Timms' position permanent is raising some eyebrows in Jewish philanthropic circles.

"Was I disappointed when I read the news? It's fair to say that I was," said Mark Charendoff, president of the Maimonides Fund and a former head of the Jewish Funders Network. "I don't know the process they went through that led to this decision."

Officials at the 92nd Street Y declined to be interviewed for this story or address questions on the subject by email. Phone calls to numerous Y board members also were not returned.

While it describes itself on its website as a "proudly Jewish organization," the Y's programming long has focused far more on the wider community than on Jewish culture. It serves primarily as a cultural center, hosting world-class artists, entertainers and public figures, along with some specifically Jewish programming. It also has many of the elements typical of JCCs and YMCAs: fitness programming, childcare, a nursery school and activities for seniors.

The selection of a non-Jew to lead this major New York Jewish institution raises questions both about the character of the Y and about the larger issue of gentiles leading Jewish organizations.

Is restricting the executive positions at Jewish institutions to Jewish candidates arbitrary and limiting, or does having a non-Jewish executive detract from the mission of a Jewish organization-and, potentially, its attractiveness to Jewish donors?

"Most organizations that identify themselves Jewishly know that a significant portion of their support is going to come from Jewish philanthropists, the Jewish community, so they try to hedge it both ways," said Jay Sanderson, president of the Jewish Federation of Greater Los Angeles.

"Do I believe it's impossible for someone not Jewish to take on these jobs? No. But you have to be passionate about building the Jewish people to be involved in any of these organizations," Sanderson said. "The 92nd Street Y didn't make being Jewish a high priority. To me it's a little disappointing. As organizations choose to become more universal and less particular, more secular and nonsectarian, this is going to happen more and more."

Jewish nonprofit leaders long have bemoaned the dearth of future leaders prepared to step up and take the reins of Jewish nonprofit institutions. Some blame a lack of talent, others a lack of leadership training; many complain that executive jobs in the Jewish nonprofit world are not sufficiently attractive or lucrative to retain top Jewish talent.

Yet in the world of federations, JCCs and groups that deal with Jewish content, there's practically no willingness to entertain the possibility of a non-Jewish executive at the helm, according to David Edell, president of DRG, an executive search firm that specializes in Jewish nonprofits. The Jewish institutions that have been most open to non-Jewish leadership, he said, are groups that focus on health care or human services, such as Jewish family service organizations and Jewish day schools.

Marc Kramer, executive director of Ravsak, a network of Jewish community day schools, said interest in hiring non-Jewish executives arose years ago, when the day school movement was growing quickly and there was a shortage of quality talent. These days, day schools by and large have turned away from gentile leadership, according to Kramer.

Within the Jewish schools that still have non-Jewish heads of school, the lead professional position usually is more akin to CFO or COO than principal.

"In communities where we have had gentiles in the lead professional role, they often have a Jewish partner who holds the cultural and religious portfolio," Kramer said. "What we've heard from the schools is that it is tricky; it's not a hole-in-one kind of move."

The 92nd Street Y may be trying to pull that off with its hiring of Rabbi Peter J. Rubinstein of Manhattan's Central Synagogue as the Y's director of Jewish community, a new full-time position whose announcement was made simultaneously with the Timms announcement. The Y's news release on Rubinstein focused on his role "nurturing 92Y's Jewish spirit," but it overreached in describing him as the Y's "spiritual leader." Rubinstein clarified to JTA that serving as spiritual leader is not part of his job description, noting that he would not be leading worship services or conducting any lifecycle observances.

The Y, originally the Young Men's Hebrew Association, was founded in 1874 in New York by German Jews. It moved to its current location on the Upper East Side in 1900. The Y's mission statement says: "Founded 140 years ago to serve the Jewish people, 92nd Street Y promotes individual and family development and participation in civic life within the context of Jewish values and American pluralism."

Fordham University law professor Thane Rosenbaum, a frequent presenter at the Y, says the institution always has been informed by Jewish values but is not limited to the Jewish community, either in target audience or presentation.

"There's always been an implicit understanding that the place is endowed with Jewish values, but its presentation-what is on stage-has never been focused on that," Rosenbaum said. "If anything, it's always tried to reach a wider audience. The decision to elevate Henry Timms to executive director fits into that."

Rosenbaum credited Timms with greatly expanding the Y's reach and programming. Where it matters, Rosenbaum says, Timms is Jewish enough.

"This guy has a Jewish soul. It's not about did he attend yeshiva," Rosenbaum said. The choice of Timms as executive director, Rosenbaum said, "only reinforces the point that as long as the values and objectives of the place are being both honored and preserved, the leadership of the 92nd Street Y would not be dependent on circumcision."