Reaching the next generation 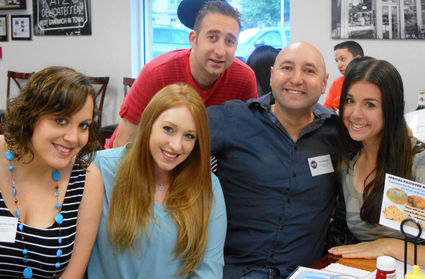 For the past 60 years or so, the question of how to create and sustain a vibrant Jewish community in America has remained relatively the same, but the players continue to change. And the question on everybody's agenda today is how to reach the Millennials, with 80 million Americans falling into this demographic category. Here in Central Florida, this has been part of the Federation's focus over the last year and a half and the results are very encouraging.

In 2003, spearheaded by local philanthropist Bob Yarmuth, the group Or Hadash was created to engage Generation X, who had emerged as the next generation. Or Hadash provided programming for this generation and cultivated leaders who went on and continue to be very active in the larger Jewish community. In the fall of 2012, the Federation began to restructure and rethink the goals of Jewish programming for young people to include the Millennials in our community.

The Federation appointed a committee of young men and women representing a cross-section of the young Jewish population to begin the visioning process. The committee is chaired by Scott Abramson and A.J. Kronenberg, both Bornstein Leadership Development Program graduates and who also serve on the Jewish Federation board. The committee took time to do brainstorming and research. They looked at the recent Pew study on Jewish Americans, as well as studies on the engagement of Millennials. They recognized some trends in our community, including the transient nature of Orlando for young professionals, the large number of Millennials who identify as having no religion and the need for a support system in the area. The committee knew that they had to find creative and innovative ways to attract, engage, and retain young Jews in our community.

As they began to analyze the findings, there was a pattern emerging of the young Jewish adult community. The diversity and interests of this age group are extensive: They want family outings, volunteer opportunities, Jewish learning, Shabbat dinners, and professional networking. They want diverse, meaningful communal engagement, and the points of connection need to be numerous.

In October of 2013, Our Jewish Orlando (OJO) launched with its first initiative called Torah on Tap, an opportunity to meet up at a bar with a rabbi or special guest speaker to infuse Jewish learning into the traditional happy hour. This program continues to gain momentum, reaching an average of 40 people each month. Many new connections have formed as different groups leave the program together to have dinner afterwards and get to know each other better. "It's been great to get together with Jewish people of my age on a regular basis. It's been even more interesting to see the conversation turn to Jewish topics even when we're at a bar," said OJO board member Matt Broffman. "Our speakers talk about interesting Jewish topics. Those who want to participate do and other are just happy to hang out and meet new Jewish people. These relationships are the first step toward creating community," he added.

With Torah on Tap reaching its own success, OJO began looking toward another segment of its target population: young families with small children. In November of 2013, Shalom Families began holding monthly interactive cultural and Jewish holiday events targeted at this group. This project has grown faster than OJO thought possible. From a visit to a fire station to picnics in the park to a Yom HaAtzmaut "trip" to Israel, there have been up to a hundred people at these events and there are new faces each month. Shalom Families has been a great enhancement for the PJ Library, a federation-supported program that provides 400 families in Greater Orlando with free Jewish books each month geared toward their child's age. With the creation of Shalom Families, these families come together and connect with other Jewish families, once again creating community. "I am excited that the events have been so well attended and the positive response has been overwhelming," says Whitney Kuvin, OJO board member and chair of the Shalom Families Committee. "The families are starting to engage with each other and the local Jewish community. We look forward to continuing to connect with new families who come to Orlando and those who have been unaffiliated until now."

Since its creation in February of 2014, OJO's Social and Service Committee has increased social and community service opportunities beyond Torah on Tap. Meet Up Groups, introduced in March, are creating opportunities for young adults with similar interests, like food, film or Jewish learning, to come together and express their interests within the Jewish community. In April, over thirty people came together for the first OJO Shabbat dinner. These dinners will become a regular feature of OJO programming.

One of OJO's goals from the very beginning was to educate young people about and to connect them to the broad range of Jewish community organizations. Collaborating with other agencies and holding joint events will help OJO achieve this goal. So far, Shalom Families has held joint programs with the Jewish Academy of Orlando and the JCC Early Childhood Learning Center, which have been very successful. In December 2013, OJO co-sponsored an event with the JCC. As the group continues to grow, there will be more opportunities for partnerships with other community agencies and synagogues.

"Building a community is a very collaborative process," says Becca Ginns, Our Jewish Orlando program coordinator. "We are all working together to build on our strengths and meet the growing needs of this generation."

Olga Yorish, JFGO executive director, adds that "young people in our Jewish community want to meet each other, form relationships, and connect to the Jewish community. The Millennials are doing it differently than their parents, but they are looking for meaning and connections. The Jewish Federation, with its OJO initiative, is here to help them make these connections. Providing opportunities for growth and engagement is exactly what the Federation does to ensure that future generations of Jews remain connected to Jewish life."

OJO's plans for the future include more social, networking, and educational opportunities for young people, connecting with peers in other Jewish communities through national initiatives, and engaging in meaningful volunteer activities right here in Orlando. To learn more about OJO or to connect to the group, call or email Becca Ginns, bginns@jfgo.org, 407-645-5933 ex 228.