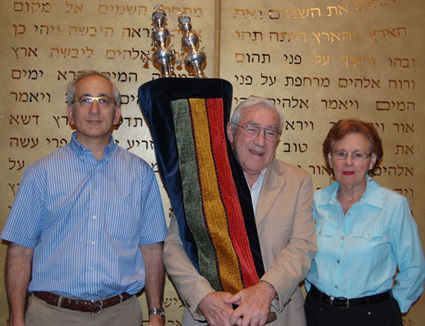 At the end of this month, a delegation of members from Temple Israel will accompany Temple Israel's "Goold Torah" to Berkach, Germany, for the 160th anniversary of the opening of the building that housed the then-newly-built Berkacher Synagogue (1854). This Torah had been written especially for the synagogue's opening by Hirsch Hessberg, an ancestor of Lothar Goldschmidt who eventually saved the Torah from destruction by bringing it to Temple Israel after fleeing the Nazis. Thus, the scroll will be welcomed back to the place where it was used for decades and where its people had to either flee, face deportation, or were murdered.

The presence of the historical Berkacher Torah scroll at the 160th Jubilee of the inauguration of the synagogue was via invitation by event sponsors to lend the Torah to be part of this commemoration on June 1. Bringing the Torah into the synagogue building should provide an especially meaningful moment. The highlight of the jubilee will be the reading from the Berkacher Toral scroll during the memorial ceremony.

The initial inauguration of the synagogue was on the beginning date of the festival of Shavuot. This memorial event nearly coincides with the beginning of Shavuot in this year of 5774. Thus, the 19th century dedication of the synagogue and the 160th jubilee are closely bound to the central theme of Jewish belief in the profound gift of the Torah. Singh Khalsa, a member of the Jewish community in Thuringen and one of the organizers of this event says, "Our local association has made it our purpose to stimulate a revival of Jewish social, cultural and religious activities in remembrance of the 19th century atmosphere and conditions of Jewish life in the village. This is our appeal to the International Jewish Community for assistance and participation in increasing awareness for the reinstating of the quality of Jewish life in the village of Berkach."

Those who will be personally delivering the Goold Torah to the Berkach Village Synagogue building are Harry and Rhea Rein, Daniel and Lori Pearson-Wise, Sylvie Wise and Richard Crane. This year marks the 60th anniversary of Temple Israel, another aspect to this event and a special feature to those making the trip.

If you would like more information about the Goold Torah, please contact the Temple Israel office at 407-647-3055 or office@tiflorida.org.