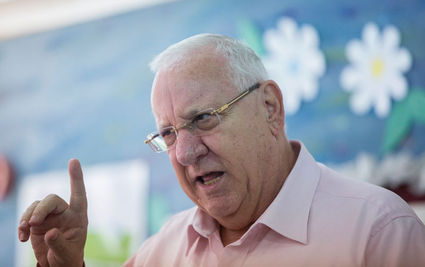 Likud Knesset member Reuven Rivlin meets with children at a Jerusalem school on May 30, 2014.

Israel's 120-seat parliament today chose long-time Likud member Reuven Rivlin as the country's next president who will succeed the popular Shimon Peres, who retires next month at the age of 90.

Rivlin, who served two terms as speaker of the Knesset, has been a member of parliament for almost 20 years. He won on the second round of voting after none of the original five candidates, including Nobel chemistry laureate Dan Schectman, failed to achieve an overall majority. Rivlin beat out rival Knesset member Meir Sheetrit in the second round. He said that he will serve the entire public.

"This (Likud) party was my home as I said it would be until I was legally obligated to leave it. Now, I am no longer a party man, I am no longer a faction man. I am everybody's man. A man of the people," Rivlin told the Knesset.

"We have reached the end of a difficult election campaign, the faith of the public in the office of president received a harsh blow and it is our duty to rehabilitate it and restore it," Rivlin said. He also expressed his thanks to the Knesset for chosing him. "The Knesset is the spice of life of the Israeli democracy. From this moment I begin a personal process of separation from the place that has been my home."

Although Rivlin is from Prime Minister Binyamin Netanyahu's Likud party, there has been tension between the two men since Rivlin reportedly made a nasty remark about Netanyahu's wife.

His election came after a nasty campaign, which lasted for the past two months. One candidate, Labor's Binyamin Ben Eliezer, was forced to drop out over allegations of corruption after some $500,000 that he had not declared to income tax authorities was found in his safe deposit box. He said it was money that his son, who lives abroad, had given him to hold until he bought an apartment in Israel.

Israeli analysts say Rivlin is a logical choice as president, and may be less interventionist than his predecessor.

"Rivlin represents the old artistocracy in the Likud," political commentator Amiel Ungar told The Media Line. "I think he will walk back some of Peres's interventionism."

The presidency in Israel is a symbolic, but important, position. As Israel is a parliamentary democracy, voters choose a party, not an individual candidate. The party with the largest number of votes usually forms the governing coalition.

"I believe the presidency should go back to the original model of an intellectual, moral leader, not a golden handshake from the political arena," Ungar said.

This campaign focused on economic issues, as well as politics. After Ben Eliezer dropped out over financial issues, there was pressure on the candidates for full financial disclosure. According to Israeli law, candidates need to report their income and assets to the Knesset ethics committee but it is not publicized. In this case, all of the candidates publicly disclosed their assets.

"Lately we have looking closely into the financial ties of our elected politicians and we know that a link between government and business is not healthy in any democracy," Yitzhak Galnoor, a professor of political science at Hebrew University, and the former civil service commissioner told The Media Line. "Candidates for any public position should make clear details about their health and their finances."

The election took place just a few days after Peres traveled to the Vatican for a joint prayer for peace with Palestinian president Mahmoud Abbas. Galnoor says that as Knesset speaker, Rivlin was scrupulously fair.

"Judging by his behavior, I think he will be on guard for Israeli democracy," Galnoor said. "He will put aside any ideological inclination and will be the president of all Israelis."