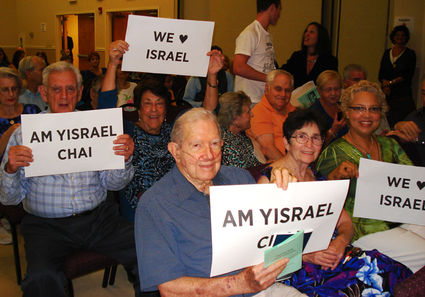 Community members show their support for Israel at the Federation-supported Israel Solidarity Gathering.

On Wednesday, July 23, 2014, the Jewish Federation of Greater Orlando (JFGO) and the Greater Orlando Board of Rabbis sponsored an Israel Solidarity Gathering at the Maitland Jewish Community Center.

Approximately 350 people from the Orlando community came to show their support for Israel.

Chaim Shacham, consul general of Israel to Florida and Puerto Rico gave a briefing on the current situation in Israel.

"We did not choose this conflict, it was forced upon us. Even though we did all that we can, we couldn't prevent escalation. Here we are, two weeks after the beginning of Operation Protective Edge and the Hamas organization has fired over 2,300 rockets at Israeli cities. That's more than one rocket fired indiscriminately every ten minutes... at an unarmed civilian population. It is a vile and abhorrent war crime," Shacham said in his speech.

Shacham confirmed that Hamas is firing theses rockets behind innocent Palestinian civilians using them as human shields committing another war crime. "I can think of nothing more cynical and evil," he stated. "Knowing full well the value Israel and the rest of the civilized world places on human life, but being unbound by such values Hamas is forcing upon the Israeli government a terrible moral dilemma."

He stated the dilemma Israel is in. "Everyone understands that Israel must defend its citizens. Israel must ask itself a very painful question. Does it protect Israelis but risk harming Gaza civilians thus exposing itself to the criticism engendered by out-of-context global misperceptions, or does it spare Gaza civilians and not strike at Hamas targets?

"Israel expends vast resources building bomb shelters for its own population. Hamas, on the other hand, has invested all its concrete to make bunkers for its leaders and tunnels for its terrorists. Hamas has embedded itself deep inside the civilian population, firing rockets from its school yards, storing its weapons in Mosques, and establishing military headquarters in hospitals and private homes."

Shacham emphasized that Israel has continued to provide the flow of humanitarian aid to Gaza throughout this conflict. "Daily hundreds of Israeli trucks loaded with food, medicine, fuel, and providing electricity from its own national grid is brought into Gaza. Israel even established a military field hospital just outside the border of Gaza providing medical assistance to wounded Palestinian citizens.

He compared the actions of the two sides in this war: "While Hamas has shelled the humanitarian crossing points, knocked out the electricity lines, prevented its population from reaching the hospital, and left its own people in hunger, darkness, and pain. Israel has readily agreed to every ceasefire proposal put before it hoping to avoid further bloodshed. While Hamas has cynically violated all cease fire arrangements on the ground.

"Israel has expended vast efforts to warn every single Gazan in a target area to evacuate in order to avoid injury using telephone calls, text messaging, leafletting, and warning shots. While Hamas has purposefully instructed its population to disregard Israeli warning and to remain in the target zones to protect its military assets with their own lives.

Sixteen-year-old Eli Ziegler shared some of his observations on Israel after attending the NFTY in Israel Summer 2014 Program. While visiting an army base on the Golan Heights Ziegler said he was taught what it meant to serve in the Israeli Defense Force (IDF). 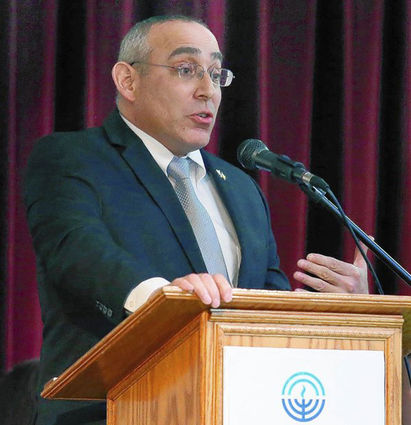 Dr. Olga Yorish, executive director of the Federation, encouraged everyone to donate generously to the Israel Emergency Fund. "Your donations will provide relief for children living in the 'zone of fire' and long term rehabilitation grants for these families." For more information contact the JFGO at 407-645-5933.

The evening ended with a hauntingly beautiful rendition of "Hatikvah" sung by Samantha Trattner, Camp J song leader. All in attendance rose and sang these words from Hatikva, "Our hope is not lost, the hope of 2000 years, to be a free people in our land, the land of Zion and Jerusalem."

It is our love for the State of Israel that unites us as a people and a proud Central Florida community.