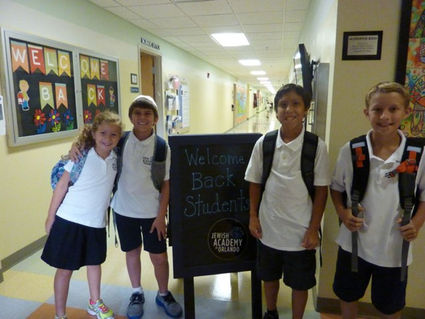 It was all backpacks and smiles as the Jewish Academy of Orlando began its 37th school year on Tuesday, Aug. 12.

When asked about the new school year, second grader Noah Talsky said, "It was a good day... all the kids in second grade get their own laptop!" and eighth grader Ashlinn Thomas stated, "It was so much fun; it was easier to get into the same routine."

For the second year in a row there is a vibrant kindergarten class and an even stronger first grade. "My goal," Rusonik stated, "is to retain as many of these children as we can and build from that foundation."

For more information or to arrange a visit to the school, please contact Alan Rusonik, Head of School, at arusonik@jewishacademyorlando.org or 407-667-0713.